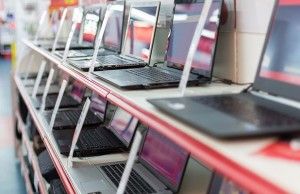 Laptops are compact enough to carry with you, yet versatile enough to run demanding applications. It's the best tool for doing serious work or play whether you're at home, on the road or in a college classroom. For those reasons, we've compiled lists of the best business laptops and best college laptops, not to mention our best laptops rankings for most users.

While standalone tablets and smartphones are always popular, most people realize that everything from typing a research paper to crunching video to gaming works better on a laptop. So what type of laptop should you get? We put together a laptop buying guide to help you out.

There's a wide variety of sizes, features and prices, which makes choosing the best laptop a challenge. That's why you need to figure out what your needs are.

These are the most important things to consider when choosing a new laptop. For a lot more detail, see the sections below.

This is not an easy question to answer, especially if you're not familiar with both Macs and PCs. But this quick overview of each platform’s strengths and weaknesses should help.

Most laptops come with one of three operating systems: Windows, Chrome OS or MacOS (for MacBooks only). Choosing the right one is a personal preference, but here's a quick summary of what each offers.

The most flexible operating system, Windows, runs on more laptop models than Chrome OS or Mac OS X. Windows notebooks range in price from under $150 to several thousand dollars and offer a wide array of features from touch screens to fingerprint readers to dual graphics chips. Windows 10, the latest version of Microsoft's flagship operating system, provides a number of improvements over Windows 7 and 8, including the ability to switch between tablet and desktop modes, a revamped Start menu with live tiles and the powerful Cortana digital assistant.

Since its launch in July 2015, Windows 10 has also added a host of improvements, including the ability to use follow-up questions with Cortana, search your email using natural language and use your stylus to scribble almost anywhere. Windows 10 laptops are great for students, researchers and business users, and they're the only machines gamers should consider.

All MacBooks come with Apple's latest desktop operating system, macOS Catalina. Overall, the operating system offers similar functionality to Windows 10, but with a different take on the interface that substitutes an apps dock at the bottom of the screen for Microsoft's Start menu and taskbar. Instead of the Cortana digital assistant, Mac users get Siri. They can also perform transactions with Apple Pay, take calls or texts from their phones and unlock their laptops with an Apple Watch.

However, macOS isn't made for touch, because no MacBook comes with a touch screen. The latest macOS Catalina operating system brings iPad apps over to Mac, as well as secondary display support for iPads and new accessibility features.

MORE: MacBook Air vs MacBook Pro: What Should You Buy?

Found on inexpensive Chromebooks such as the Samsung Chromebook 3. Google's OS is simple and secure, but more limited than Windows or macOS. The user interface looks a lot like Windows with an application menu, a desktop and the ability to drag windows around, but the main app you use is the Chrome browser. The downside is that many of the "web apps" you use don't work particularly well offline. However, that's changing as almost all Chromebooks, including the high-end, Google PixelBook, can now run Android apps.

If you need a device to surf the Web and check email, navigate social networks and chat online, Chromebooks are highly portable and tend to offer good battery life at low prices. They are also extremely popular with schools and parents, because they are hard for kids to infect with malware and more functional than most tablets. If you need a Chromebook, look for one with at least 4GB of RAM and 16GB of storage. A 1920 x 1080 resolution preferred and 4K is better but very uncommon. Pay extra to get a 2-in-1 if you plan to use Android apps.

Many PC laptops fall into the category of 2-in-1 laptops, hybrid devices that can switch between traditional clamshell mode, tablet mode and other positions in between such as tent or stand modes. 2-in-1s generally come in two different styles: detachables with screens that come off the keyboard entirely and flexible laptops with hinges that bend back 360 degrees to change modes.

Most of these systems are much better at serving one purpose than the other, with bend-backs being laptops first and detachables offering a superior tablet experience. However, if you don't see the need to use your notebook as a slate, you'll usually get more performance for your money with a traditional clamshell laptop.

Before you look at specs or pricing, you need to figure out just how portable you need your laptop to be. Laptops are usually categorized by their display sizes:

4. Check That Keyboard and Touchpad

The most impressive specs in the world don't mean diddly if the laptop you're shopping for doesn't have good ergonomics. If you plan to do a lot of work on your computer, make sure the keyboard offers solid tactile feedback, plenty of key travel (the distance the key goes down when pressed, usually 1 to 2mm) and enough space between the keys. If you're buying a Windows laptop, be sure it has Precision touchpad drivers.

Look for an accurate touchpad that doesn't give you a jumpy cursor and responds consistently to multitouch gestures such as pinch-to-zoom. If you're buying a business laptop, consider getting one with a pointing stick (aka nub) between the G and H keys so you can navigate around the desktop without lifting your fingers off the keyboard's home row.

Notebook components such as processor, hard drive, RAM and graphics chip can confuse even notebook aficionados, so don't feel bad if spec sheets look like alphabet soup to you.

Here are the main components to keep an eye on.

CPU: The "brains" of your computer, the processor has a huge influence on performance, but depending on what you want to do, even the least-expensive model may be good enough. Here's a rundown:

MORE: Which Laptop CPU is Right for You?

RAM: Some sub-$250 laptops come with only 4GB of RAM, but ideally you want at least 8GB on even a budget system and 16GB if you can spend just a little more. For most folks, 32GB or more is more than enough while 64GB and above is reserved for power users.

Storage Drive (aka Hard Drive): Even more important than the speed of your CPU is the performance of your storage drive. If you can afford it and don't need a ton of internal storage, get a laptop with a solid state drive (SSD) rather than a hard drive, because you'll see at least three times the speed and a much faster laptop overall.

Among SSDs, the newer PCIe x4 (aka NVME) units offer triple the speed of traditional SATA drives. Sub-$250 laptops use eMMC memory, which is technically solid-state but not faster than a mechanical hard drive.

Display quality is about much more than resolution. IPS panels range in color and brightness, so read our reviews to find out if the laptop your considering has a good display. We typically look for n sRGB color rating of over 100% and brightness great than 300 nits results. If you want the very best picture quality and don't care about battery life, consider an OLED display. You should also keep an eye out for upcoming display technology to hit laptops, including miniLED.

Touch Screen: If you're buying a regular clamshell laptop, rather than a 2-in-1, you won't get much benefit from a touch screen and you will get 1 to 2 hours less battery life. On 2-in-1s, touch screens come standard. If you still want a touch screen, check out our best touch screen laptops page.

Graphics Chip: If you're not playing PC games, creating 3D objects or doing high-res video editing, an integrated graphics chip (one that shares system memory) will be fine, especially Intel's latest Iris Plus graphics. If you have any of the above needs, though, a discrete graphics processor from AMD or Nvidia is essential.

Nvidia's rivals, AMD, is Apple's vendor of choice for graphics cards, although you really shouldn't buy a MacBook for gaming. AMD is set to launch the Radeon RX 5600M and the Radeon RX 5700M GPUs for laptops later this year, so keep an eye out for those chips.  AMD also keeps a list of its graphics cards.

Ports: While the absence of ports is usually not a deal-breaker when choosing a laptop, it's helpful to get the connections you need right on the system, rather than having to carry a slew of dongles. Most mainstream laptops will have USB 3.0 ports and HDMI out for video. However, an increasing number of laptops use USB Type-C or Thunderbolt 3 ports that are USB Type-C compatible.

Getting Type-C is a definite plus because you can use it to connect to universal chargers and docks. If you can wait, USB 4 will arrive soon with faster transfer rates and the ability to daisy-chain 4K monitors with one cable. Other useful connections include SD card slots, headphone jacks and Ethernet ports (especially if you're a gamer).

Connectivity: If you need to use your laptop on the go, consider buying a notebook with 4G LTE support. You'll have to pay for a data subscription plan, but this will allow you to access the internet away from a router. If you want a laptop with the latest and greatest connectivity options, find one with Wi-Fi 6 support. Wi-Fi 6 offers increased theoretical throughputs and a more stable connection than 802.11ac. We also suggest looking for a laptop with Bluetooth 5, the latest standard that offers improved connectivity with Bluetooth-enabled devices, like mice and headphones.

DVD/Blu-ray Drives: Few laptops come with optical drives, because all software and movies are downloadable, though we've kept track of the laptops with DVD drives. However, if you really need to read/write discs and your laptop of choice doesn't come with a built-in DVD drive, you can always buy an external one that connects via USB for under $20.

If you're buying a large, bulky notebook or a gaming rig that you'll use only on a desk near an outlet, you don't have to worry about battery life. However, if you plan to use the laptop on your lap, even if it's at home and or work, you'll want at least 7 hours of endurance, with 8+ hours being ideal. To determine a notebook's expected battery life, don't take the manufacturer's word for it. Instead, read third-party results from objective sources, such as our reviews.

7. Plan Based on Your Budget

These days, you can buy a usable laptop for under $200, but if you can budget more, you'll get a system with better build quality, stronger performance and a better display. Here's what you can get for each price range.

Your laptop is only as good as the company that stands behind it. Accurate and timely technical support is paramount, which is why Laptop Mag evaluates every major brand in our annual Tech Support Showdown. This past year Apple came in first place, followed by the big story of the year: Razer, while Dell rounded out the top three.

Support is only part of what makes a notebook brand worth your money. You also have to consider how the manufacturer stacks up to the competition in terms of design, value and selection, review performance and other criteria. In our 2019 Best and Worst Laptop Brands report, HP placed first, followed by Asus and Dell. We've also rated gaming laptop brands, with MSI taking first place and Acer and Alienware rounding out the top three.