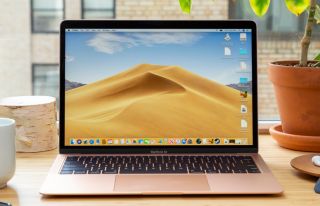 Update on March 18: Apple officially unveiled the MacBook Air (2020). The new model has an improved keyboard and lower starting price.

The MacBook Air saw a minimal update in 2019, with the primary change being the introduction of a new True Tone display and, perhaps even more notably, a $100 price drop.

While everyone is anticipating the transition to the new scissor-style Magic Keyboard, that isn't the only update expected for the MacBook Air 2020. Numerous rumors have been circulating about updates to Apple's most affordable laptop, but not all of them are likely to come true this year.

We've gathered all of the rumors for a look at what to expect from the MacBook Air in 2020, along with what we hope to see.

There are no specific rumors regarding the price of the MacBook Air 2020 yet. But after receiving a $100 price cut last year, the entry-level MacBook Air price will most likely remain the same. With that said, we have seen more MacBook deals in recent years, so finding a $999 MacBook Air isn't uncommon.That's also the current student price for the MacBook.

There have been limited rumors surrounding the release date of the MacBook Air 2020 so far. An early report pegged the launch for the first half of 2020, but there was some question as to whether this referred to the launch of the MacBook Air or the MacBook Pro. The most likely answer is that it will be released around the same July time frame as last year's update. Among other things, this is the optimal back-to-school timing for the education market, which favors the Air.

The 2018 update to the MacBook Air brought substantial physical changes to the laptop, including a thinner and lighter design and a Retina display. We aren't expecting dramatic changes to the overall design this year.

The most important update will be the move to the new scissor-style Magic Keyboard that Apple analyst Ming-Chi Kuo predicted for the entire MacBook lineup last fall. With little or no reports of keyboard failures among owners of the 16-inch MacBook Pro (2019), it seems Apple finally has a reliable laptop keyboard again, and we expect it to find its way into the MacBook Air 2020.

The one lingering question is whether there will be size ramifications given the greater space needs for the new keyboard design. Can Apple save space elsewhere, or will the MacBook Air have to go back to a slightly thicker and heavier design?

With the 12-inch MacBook being discontinued last summer, there are no doubts that fans of that laptop would love to see an even smaller MacBook Air, but it's hard to imagine that happening this year in light of the keyboard change.

The processor will be one of the more interesting stories for the MacBook Air (and Apple laptops in general) over the next couple of years, with persistent rumors of Apple moving to in-house ARM CPUs for at least some of its laptops. But the latest rumors suggest this won't happen until at least next year. This will represent a massive shift for Apple if and when it does happen, but as with Windows ARM laptops, it may be advisable to wait for the second generation.

So what does that mean for this year? Rumors of a MacBook Air with a 10th-gen Intel CPU have been around since last fall, and this continues to seem like the most likely option for Apple this year. Considering the 2019 MacBook Air still used an aging 8th-gen Intel CPU, though, 10th Gen CPUs will represent a significant upgrade for those who waited.

Another longtime rumor that was renewed last fall is that Apple will finally bring a cellular option to its laptops. Although previous reports suggested this could happen in late 2020, it seems more likely that this option would be tied to the move to ARM and, therefore, should not be expected this year.

What we want from the MacBook Air 2020

A reliable keyboard: While a better keyboard is virtually guaranteed, it's impossible not to include this on our list. The new scissor-style Magic Keyboard needs to come to the MacBook Air even if it means a slight trade-off in size and/or weight.

Ports: While we know we aren't going to get anything other than USB-C (and, hopefully, a single headphone jack), we would love to have at least one more USB-C port on the MacBook Air to give us a charging option on either side of the laptop and avoid the persistent need for a USB-C hub.

Improved battery life: The previous model performed adequately in our battery testing last year, but it was still hours behind the front runners, like the HP Spectre x360 and the 1080p Dell XPS 13. Given the more modest performance of the MacBook Air, it would be nice if Apple could get the battery life close to that of the 13-inch MacBook Pro.