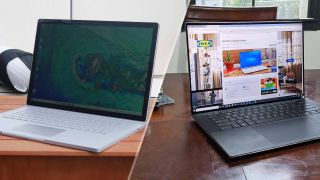 But there are some crucial differences between these two notebooks that you should be aware of before you take the plunge. To help you make an informed buying decision, we're going to run through each aspect of these laptops and pick a winner. Without further ado, here is our heated face-off between two of the most premium Windows laptops around.

These are both expensive laptops but the Dell XPS 15 is the better value if you look at specs and price alone.

The XPS 15 is a traditional clamshell laptop whereas the Surface Book 3 is a detachable 2-in-1 with a lid that turns into a tablet.

As a laptop, the Surface Book 3 looks like it was cut from a slab of concrete. Matte-gray magnesium coats the chassis and gives it a subtle texture. The unassuming design is simple and elegant, but an unsightly gap between the deck and lid when the laptop is closed, along with thick display bezels, ruin the impression of it being a modern machine.

As with the previous models, the standout feature of the Surface Book 3 is the detachable display. With the press of a key, you can detach the 15-inch panel and use it as a discrete tablet. This means that, unlike most laptops, the Surface Book 3's components are housed in the lid, not the bottom portion. The tablet detaches with a firm yank and reattaches when you line up the connectors and prongs with those on the deck.

In comparison, the XPS 15 is your traditional clamshell laptop — nothing twists, detaches or folds. Redesigned for 2020, the XPS 15 has an ultra-compact chassis highlighted by a four-border InfinityEdge display. In short, there are no bezels surrounding the XPS 15's screen.

The XPS 15 has a fancy platinum silver CNC aluminum lid with a Dell logo engraved in the center. Open the lid and you'll notice black carbon fiber on the deck, along with speakers flanking the keyboard underneath which sits a massive trackpad. The power button also doubles as a fingerprint scanner. Unlike the Surface Book 3, the XPS 15 does not have an IR camera for quick login.

The XPS 15 surprisingly has a full SD card reader on the right side next to a USB-C port and a headphone jack. On the left side are a pair of Thunderbolt 3 ports and a lock slot.

Although it doesn't have a Thunderbolt 3 port, the Surface Book 3 has a wider selection of ports, which includes two USB 3.1 ports and an SD card slot on the left side. On the right side are a USB-C input and a Surface Connect port for charging. The headphone jack is on the top-right corner of the lid (for tablet mode)

According to our colorimeter, the XPS 15's screen covers 132% of the sRGB color gamut whereas the Surface Book 3's screen hit just 101%. The premium category average is 121%.

The XPS 15's panel reaches 434 nits, outshining the 402-nit display on the Surface Book 3. Both get significantly brighter than the average premium laptop (368 nits).

The Surface Book 3 is one of the most comfortable laptops to type on thanks to its snappy backlit keys, which deliver a decent amount of travel considering how thin the laptop is. There is a nice heftiness to each keystroke, which is rewarded with a satisfying tactile bump. Microsoft could have used the extra space to spread the keys out more, regardless, my fingers never felt cramped.

The new XPS 15 has larger keycaps than the versions before it, which makes it easier to type on if you have large fingers. The keys are well-spaced and offer bouncy feedback, although they aren't as plush as those on the Surface Book 3.

But the XPS 15 wins some points back with its absolutely gigantic touchpad, which would even make Apple blush. At 5.9 x 3.5 inches, it is 62% larger than the one on the previous model. Fortunately, the palm-rejection is top-notch and the surface was responsive to our swipes.

In contrast, the 4.1 x 2.7-inch touchpad on the Surface Book 3 is disappointingly small, although we had no problems using it to execute Windows 10 gestures, like pinch-to-zoom.

If raw performance matters most to you, then get the XPS 15. It uses 10th Gen Intel H-series CPUs, which are more powerful than the U-series processors in the Surface Book 3.

The 512GB PCIe SSD in the Surface Book 3 is its saving grace. The drive duplicated 5GB of multimedia data in 6 seconds for a transfer time of 862.6 megabytes per second. The XPS 15 (726 MBps) couldn't keep the pace.

The Surface Book 3 also has a slightly better discrete GPU if you opt for the more premium models. The Nvidia GeForce GTX 1660 Ti with Max-Q GPU (4GB of vRAM) it uses drove the Sid Meier's Civilization VI: Gathering Storm benchmark (1080p, Very High) at 63 frames per second whereas the XPS 15 played the same game at 42 fps with its GeForce GTX 1650 Ti (Max-Q) GPU.

If you're doing more work than play, the Surface Book 3 now offers a Quadro option in the Quadro RTX 3000 GPU

The XPS 15 with a 4K display lasted a respectable 8 hours and 1 minute on our battery test, which involves continuous web browsing over Wi-Fi at 150 nits.

That's a decent result for a 4K laptop, although the Surface Book 3 endured for several additional hours, clocking a runtime of 11 hours and 10 minutes in laptop mode. The tablet itself lasts for 3 hours and 27 minutes.

The XPS 15 edges out the Surface Book 3 in this contest but it's not as easy as saying "Buy the Dell." It's hard to quantify the value of the Surface Book 3's flexible design, but it must be taken into account when you're considering these laptops. With that said, if you need a tablet, or like the idea of using one for watching TV, showing presentations or reading, then buy the Surface Book 3 — no other device gives you the experience of using a full laptop and tablet in one.

On the other hand, if you prefer a traditional laptop form factor, then the XPS 15 is the best 15-inch laptop on the market thanks to its fast performance, gorgeous displays, and improved keyboard and touchpad. And don't worry about battery life. We only tested the battery life of the 4K model, but based on that result, we expect the 1080p version to last a full day on a charge.

In conclusion, the XPS 15 and Surface Book 3 are some of the Windows laptops you can buy; your decision should ultimately come down to price and your preferred form factor.