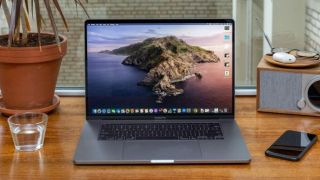 Retailers are welcoming the month of June with the best MacBook deals of the season. We're seeing some excellent price drops on Apple's premium notebooks right now.

So if you want to save on your next Apple laptop, you've come to the right place. With the launch of the new MacBook Pro 2020, we're seeing price drops on previous gen Apple laptops.

Amazon continues to offer the MacBook Pro 2019 with Touch Bar is on sale for $2,199.99($200 off). It's the second lowest price we've ever seen for this MacBook configuration. Best Buy offers the same price.

This notebook packs a Core i7 six-core processor, 16GB of RAM, and 512GB SSD.

This is one of the best MacBook deals we've seen outside of the holidays. If you're a power user in need of a premium laptop to handle demanding applications, it's one of the best laptop deals you can get.

Here are the best Macbook deals you can get today.

Another major revamp to the MacBook Pro 2020 is the hardware bump to 10th Gen Intel CPUs. Interestingly, Apple still offers 8th Gen chips on the lower-end models to keep the starting price ($1,299) down. If you want the best performance speed and have room to splurge, we recommend you opt for the MacBook Pro with 10th Gen CPU, which starts at $1,799.

Need a MacBook Pro with muscle? The 2019 13-inch MacBook Pro is equipped with a snappier Core i5-8279U quad-core CPU and offers 256GB of storage. And instead of just two Thunderbolt 3 ports, it has an array of four. This base model looks identical to the cheaper 13-inch MacBook Pro, but it's priced at a steep $1,799.

Besides its obviously larger screen, the 16-inch MacBook Pro boasts a Magic Keyboard. Apple finally ditched the problematic Butterfly keyboard for a scissor mechanism. It also added a concave to the keycap structure and a rubber dome underneath for support. This redesign makes for a better typing experience with 1mm of travel compared to less than 0.8mm previously.

In our MacBook Air 2020 review of the Core i5 variant, the laptop showed no signs of lag in our real worl performance test. Even while juggling 30 open Google Chrome tabs, Adobe Photoshop image resizing, Apple's new laptop held its own.