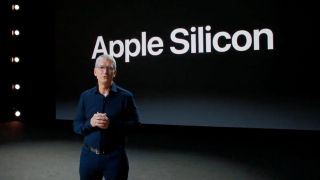 Apple finally revealed its plans to move to custom in-house processors at WWDC 2020 and as part of that announcement, the company stated that the first MacBook with Apple Silicon would be arriving before the end of the year.

Apple has not revealed what this hardware will actually look like, but thanks to a number of reliable leakers, we have a pretty clear picture of what to expect when the laptop arrives later this year. We've also uncovered some details thanks to Apple needing to get developers on board with the new hardware in order to guarantee a smooth software transition.

Here’s everything we know so far about the MacBook with Apple Silicon, from pricing and availability to design. We'll also give you a rundown of what we want from this laptop.

The prospect of a more affordable laptop from Apple is always enticing and the move to developing in-house chipsets has naturally led some to speculate that cheaper MacBooks are on the horizon.

A recent report from TrendForce put the estimated cost for these first Mac SoCs from Apple at under $100, which is well below the $200 to $300 that a modern 10-nanometer Intel Core i3 commands. However, we caution you not to get your hopes up as it would be extremely out of character for Apple to drop its MSRP on a product, particularly given that it just finally brought the MacBook Air back down to a $999 starting point this year.

The more likely outcome is that Apple will increase its profit margins on each MacBook sold, which, if you are looking for a bright side, should happen without you having to pay more.

While Apple has given a 2-year timeline for the full transition away from Intel, it claims the first Mac with Apple Silicon will ship later this year. That statement was made at WWDC near the end of June so it seems likely that Apple will be able to deliver on this timeline.

Needless to say, we’ll be keeping our eyes peeled for any more precise indication as to when the first MacBooks with an ARM-based CPU will arrive and, given that we are more than halfway through the year, we expect it to be soon.

While there are always ample Apple patents for potential new MacBook designs floating around, we haven’t seen any suggestion of a dramatic redesign specific to the MacBook with Apple Silicon.

It’s reasonable to assume, with the decreased space and thermal needs of the 5nm Apple Silicon, that the MacBook with Apple Silicon will be Apple’s thinnest MacBook ever.

Some assume that the first MacBook with Apple Silicon will essentially take the design of the fanless MacBook 12-inch that was discontinued last year, which would mean a single USB-C port and perhaps a 3.5mm combo headphone/mic jack.

However, Ming-Chi Kuo has previously stated that the MacBook Pro will be the first MacBook with Apple Silicon and that it will arrive either in Q4 of 2020 or Q1 of 2021 with little to no changes from the current design. While he still maintains this claim, he has added that a MacBook Air with Apple Silicon will be released around the same timeframe. Apple will then follow up with a 14-inch and 16-inch MacBook Pro with Apple Silicon before the end of 2021 according to Kuo.

A theory put forth by J. Glenn Künzler at Sonny Dickson, is that Apple will collapse its 13-inch laptop line in the move to Apple Silicon with just a single line of laptops called either the New MacBook or simply MacBook. His argument is that the differences between the MacBook Air and MacBook Pro lines mostly boil down to the internal hardware, and it would make sense for Apple to consolidate to a single (configurable) option.

He claims to have sources that corroborate this theory and there is certainly logic to it as far as Apple streamlining its laptop lineup. But it seems that, if this is true, it is more likely something we see happen at the tail end of the two-year transition to Apple Silicon than in the first year.

The one thing all of the current rumors regarding the design of the MacBook with Apple Silicon have in common is that we shouldn’t expect a massive redesign for this fledgling effort; instead, Apple will depend on the laptop's internals to win over customers.

Apple hasn’t divulged the specs for the first MacBook with Apple Silicon yet, but a report from Bloomberg back in April offered up some details based on leaks from the ever-popular source “people familiar with the matter.”

The first MacBook with Apple Silicon will feature “eight high-performance cores, codenamed Firestorm, and at least four energy-efficient cores, known internally as Icestorm. Apple is exploring Mac processors with more than 12 cores for further in the future," according to the report.

This is more powerful than the eight-core A12z SoC available in the Developer Transition Kit that was recently benchmarked, which already bested the current MacBook Air (2020) in some regards despite the hardware running on Rosetta 2 emulation. This bodes pretty well for the performance of the MacBook with Apple Silicon.

MacBook with Apple Silicon: What we want

Affordable pricing: It’s what we want, not what we expect, but it would be great to see Apple deliver a laptop at a price that could bring in a wider range of users and possibly be a better fit for the education market. Apple has let the iPad do the heavy lifting when it comes to education, but this could be its chance to put a little pressure on the Chromebook market with its laptops.

Longer battery life: While Apple laptops perform pretty well in this area, they have been stuck at right around the 10-hour mark for some time now. We hope that the quest for thinness doesn’t drive them to sacrifice on battery life and end up with right around that same runtime. This should be an opportunity for Apple to deliver a significant leap in battery life while still delivering an incredibly thin-and-light laptop.

No drop off in performance: Particularly if rumors of the hardware seeing little to no changes are true, the MacBook with Apple Silicon better deliver performance that is on par if not superior to what Intel is offering at the time. Tiger Lake is definitely raising that bar and, given the timeline for the release of the MacBook with Apple Silicon, will be the mark for Apple to beat.

Extensive app compatibility: Apple is definitely trying in this area with developer tools and hardware kits to help devs get their apps ready for the transition. However, this has been one of the biggest hurdles for ARM-based Windows laptops and we simply won’t believe it until we see it. Unless the vast majority of users can make the move from an Intel to Apple Silicon MacBook without dropping a single important app, this will be a bumpy couple of years for Apple’s laptops.