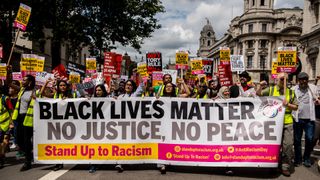 George Floyd was murdered by police officer Derek Chauvin on May 25. A black person getting killed by a police officer in the United States is unfortunately not uncommon, but this recent event has ignited a wave protests that have flooded the entire United States and the world at large. They're fighting for their right to live. They want you to know that black lives matter.

A number of Laptop Mag's staff is African American. We, like many of the other Future Publishing brands, such as Tom's Guide, PC Gamer and GamesRadar, stand with our black colleagues and with Black Lives Matter as they fight against police brutality in America. This isn't their first fight, and it surely won't be the last. If you want to help, we have suggestions on how you can lend your support.

The history of Black Lives Matter

The Black Lives Matter human rights movement was sparked following the acquittal of George Zimmeran in the 2013 murder of 17-year old Trayvon Martin. Since then, Black Lives Matter has fought against racial injustice, police brutality as well as the unlawful and unjustified murders of African Americans in the United States including Tamir Rice, Sandra Bland, Eric Garner and Breonna Taylor – a 26-year-old EMT who was murdered in her home by officers serving a no-knock warrant at the wrong address.

Black Lives Matter describes their movement's mission as to "eradicate white supremacy and build local power to intervene in violence inflicted on Black communities by the state and vigilantes. By combating and countering acts of violence, creating space for Black imagination and innovation, and centering Black joy, we are winning immediate improvements in our lives."

Black Lives Matter have been protesting, marching, petitioning and giving people the resources to speak out themselves for years. Unfortunately, won't end with George Floyd. David McAtee, an unarmed African American, was killed just recently by police officers in Louisville, KY during a protest.

What you can do to fight police brutality and racism

If you want to educate yourself on the Black Lives Matter movement as well as how the excessive policing tactics and racism is tearing this country apart, we have a list of resources for you below. You can also utilize these resources to donate to the movements, including bail funds for local protesters.

How to be vocal

If you want to show your support on social media, we would typically recommend you using the hashtag #BlackLivesMatter. However, today (June 2) is Blackout Tuesday, which is an event that encourages people to stop self promoting and post blank black images on their social media feeds.

But, on any other day, whether it's through Twitter, Facebook or Instagram, you can show your support by simply sharing videos of the protests and video evidence of any bad actors. If you can't attend protests or donate any money, the best you can do is help spread the word. Raising awareness is key here.