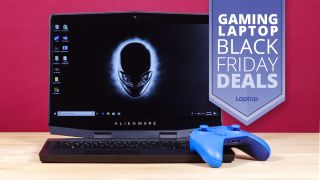 The best Black Friday gaming laptop deals in 2019 are upon us and now is the best time of the year to buy a gaming-specific laptop. Now's the time to take advantage of huge discounts on some of the best gaming rigs, from manufacturers like MSI, Alienware, Razer and Asus.

We've been tracking Black Friday deals from Amazon, Dell, Best Buy, Microsoft and Walmart and have compiled a list of the best sales on top machines. So far, highlights include massive savings on the MSI GL65 ($300 off), the Alienware Area-51m ($400 off) and the Asus ROG Strix Scar II ($600 off).

As a guide, the best gaming laptops are equipped with Intel Core i7 or Core i9 processors and RTX-series graphics. If you want the sharpest image quality, consider a 4K display. Otherwise, a 1080p panel with a high refresh rate (120Hz, ideally) will do just fine (and save you battery life). If you like glowing colors, then make sure you buy a laptop with an RGB-backlit keyboard.

Acer Predator Triton 500: was $1,699 now $1,399
This is one of our favorite gaming laptops for its slim design, strong performance and comfortable keyboard. Now $300, it's a great option for gamers who want to play at high graphics settings. View Deal