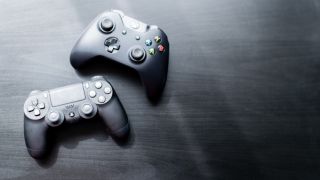 Again, information about the PS5 design is a bit more sparse. We have a Sony patent image depicting a more traditional console shape, but with a large V carved out of the top central portion of the device for airflow. The front of the device features a disk slot and several USB Type-A ports.

This sketch reportedly matches up with a PS5 dev kit image sent to Gizmodo, but it seems unlikely that this is the final retail design.

Winner: Xbox One X. To be fair, we don't have an official image of the PS5 yet, but based on what we know at the moment, we like the understated look of the Xbox Series X.

Both consoles will also feature custom SSDs that they are promising will deliver dramatically reduced load times versus the previous generation. The PS5 could be the winner on this front with dramatically faster (5.5 GB/s vs. 2.4 GB/s) throughput for its SSD.

Xbox Series X claims the title for backward compatibility champ with Microsoft promising the next-gen console will not only play Xbox One games, but it will also include Game Pass games and over 600 Xbox 360 and original Xbox titles. In addition, Microsoft said these games will all play better than ever before with improved load times, frame rates and visuals.

Godfall is one of the only confirmed exclusives for the PS5 currently, but of course, we expect sequels to God of War, Horizon: Zero Dawn, and Spider-Man. Some exclusive releases due out this year, such as Last of Us: Part II and Ghosts of Tsushima, will also likely be ported to the new console.

Delayed titles that should find their way onto both consoles near launch should include Tom Clancy's Rainbow Six Quarantine, Gods and Monsters, and Watch Dogs: Legion.

We expect this picture to clear up over the coming months as both companies ramp up towards the console launches.

Winner: Xbox Series X. I have every expectation that this could flip as we get closer to launch as the PS4 was the consensus winner of this category in the previous generation, but with a much heavier roster of exclusives already lined up for early launch dates the Xbox Series X is taking it for now.

While there is a lot yet to be decided, the Xbox Series X is the front runner so far.

Sony continues to have the more popular lineup of exclusive titles (even if we don't have launch availability info yet) and no major shakeups or announced exclusives have changed this yet. For nostalgic gamers, the Xbox Series X offers considerably more backward compatibility.