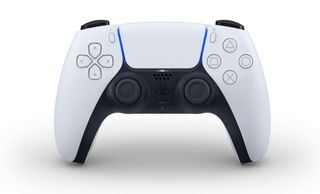 Update on April 8: PlayStation product manager Toshimasa Aoki confirmed on Twitter that the DualSense controller has a headphone jack for wired headphones. This means you can keep using your PS4 wired gaming headset with the PS5.

Sony unveiled the official PS5 controller, and it looks amazing. The controller, called the DualSense (not the DualShock), keeps the DNA of the previous versions but adds new features and a refreshed design.

We'll go over all the new features Sony added to the DualSense, but first, we need to talk about that eye-catching design.

The controllers for the Xbox One and PS4 are offered in a variety of colorways, but none of them are as striking as the PS5's DualSense controller. Predominantly white with black and blue accents, the controller is the most futuristic-looking hardware we've seen from next-gen consoles. It looks like it belongs in a sci-fi movie.

With a taller stance and sharper handles, the shape of the DualSense controller is more similar to the current Xbox controller than the DualShock 4, although the button layout remains the same.

Most of the changes are aesthetic. The center button is now the shape of the PlayStation logo, not just a circle. The action buttons (Square, Circle, Triangle and cross) are no longer their iconic colors and instead blend into the white frame adjacent to a white D-pad.

The glowing light bar was moved from the top of the controller to each side of the touchpad, and is now two thin lines instead of a single block. They're much smaller than before, but should be more visible.

"The designers were then able to draw the lines of how the exterior of the controller would look and feel, with a challenge of making the controller feel smaller than it really looks," Sony wrote in a blog post. "In the end, we changed the angle of the hand triggers and also made some subtle updates to the grip. We also took thoughtful consideration into ways to maintain a strong battery life for DualSense’s rechargeable battery, and to lessen the weight of the controller as much as possible as new features were added."

The DualSense controller will feature haptic feedback, which should give gamers a more precise physical response compared to the crude rumble used on the DualShock 4. Sony describes how the haptic vibrations (similar to those in a smartphone) can create different sensations, like the "slow grittiness of driving a car through mud."

Moreover, the L2 and R2 buttons will have adaptive triggers that let you adjust the resistance of the triggers depending on the game you're playing. For example, if you're sniping in a first-person shooter, you might want more resistance to prevent you from misfiring. Overwatch or Fortnite players might benefit from less resistance so they can spray rounds at enemies.

The DualSense also has a built-in microphone so you don't need a headset to chat with friends. If those around you don't mind, you can chat directly into the controller and hear your friends through the built-in speakers. You can otherwise connect a headset via the controller's confirmed 3.5mm headphone jack.

Other ports include a USB-C input for charging. Yes, you can finally say goodbye to your micro-USB cords.

And finally, the Share button on the DualShock 4 was renamed to "Create." Sony will give more details on what exactly that means at a later date.

There is a lot of skepticism about whether next-gen consoles can hit their projected release dates, but Sony doubled-down on the PS5's Holiday 2020 launch.

"To the PlayStation community, I truly want to thank you for sharing this exciting journey with us as we head toward PS5’s launch in Holiday 2020. We look forward to sharing more information about PS5, including the console design, in the coming months.” wrote Jim Ryan, president & CEO of Sony.