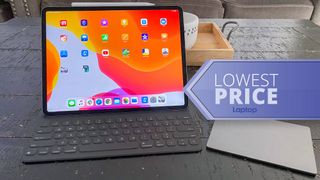 The new iPad Pro (2020)  is the tablet Apple fans have been waiting for. And now that it's here, Walmart is already discounting the latest feature-packed iPad.

This is one of the best tablet deals you can get right now.

Given its robust set of features, the 2020 iPad Pro is one of the best tablets you can get.

The 2020 iPad Pro brings a range of improvements to Apple's wildly popular performance tablet series. Among its new features is a Magic Keyboard attachment with backlit keys and a trackpad for an improved typing experience.

In our sister site Tom's Guide's 12.9-inch iPad Pro review, they were impressed by the tablet's fast A12Z Bionic CPU performance and brilliant display. They were also amazed by iPadOS's new and improved cursor support.

In terms of design, the iPad Pro 2020 is practically identical to its predecessor. The only difference is that the new iPad Pro has a square camera bump in the upper left corner.

Now $50 off at Walmart, this is a great deal for power users who want to be among the first to own Apple's new laptop replacement tablet.