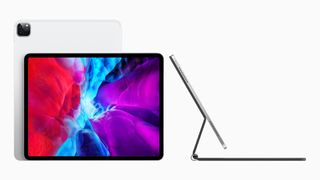 Announced alongside the new MacBook Air (2020), the new premium tablets are more than iterations of the previous models.

Here is everything you need to know about the new iPad Pro 2020.

It's finally happening. Apple is adding genuine cursor support to the iPad Pro and with it comes a new Magic keyboard attachment.

The Magic keyboard has a "floating design" in which ridged cantilevered hinges hold the iPad Pro a few inches off the surface for better viewing angles. From there, you can smoothly adjust the angle of the tablet by 130 degrees by moving it up and down.

Along with an improved typing experience, the Magic keyboard has backlit keys and a trackpad. The Magic keyboard delivers 1mm of key travel and has a USB-C pass-through charging for connecting accessories like external drives or portable monitors.

With the trackpad comes software for cursor support. We've been asking for this feature for years, and while limited support has been added, Apple is now fully embracing it.

iPadOS 13.4 will bring true trackpad support to the iPad so you can navigate with more precision. Instead of operating as it does on a MacBook, the trackpad on the iPad appears as a circle that highlights user interface elements, text fields and apps, so you know exactly what you're going to click on.

"Fluid gestures on the trackpad make it easy to switch between apps, access the app switcher and activate the Dock, Control Center and apps in Slide Over," Apple wrote in a blog post.

Productivity apps like Pages, Numbers and Keynote will be updated to take advantage of the new trackpad support.

“We’re making iPad even more capable and versatile by bringing trackpad support to iPadOS,” said Craig Federighi, Apple’s senior vice president of Software Engineering. “We carefully considered the best way to integrate trackpad use into a touch-first environment while retaining everything our customers know and love about iPad. We’re thrilled to bring this new way of interacting with iPad to the millions of people using iPadOS today."

The other major addition to the iPad Pro 2020 is a LiDAR sensor. LiDAR is an imaging technology that uses lasers to measure distance. On the iPad Pro, LiDAR can be used to measure objects up to 5 meters away. That info is combined with camera data and motion sensors to create a better understanding of a scene. The goal is to improve the experience of AR apps built on Apple's ARKit framework.

Sound complicated? It is. But there are some impressive benefits. For example, Apple says you'll be able to use the Measure app to calculate someone's height or the size of an object quicker and easier than before.

Along with the new LiDAR sensor, the 11-inch and 12.9-inch iPad Pros will come with a standard 12-megapixel wide camera and a secondary 10MP ultra-wide lens that zooms out to capture a wider field of view.

Apple also touts the new five "studio-quality" microphones in the iPad Pro, which should be great for creating music, podcasting or streaming.

The previous iPad Pro already outperformed most premium laptops, now the new iPad Pro is bringing even more power thanks to a new A12Z Bionic chip. The newest SoC combines an eight-core GPU and eight-core CPU along with an "enhanced thermal architecture and tuned performance controllers."

Apple rates the iPad Pro's battery life at 10 hours. That's a good result if it holds true, but short of record-breaking.

With a new Magic Keyboard (with a trackpad), cursor support, LiDAR sensors, and faster A12Z chip, the new iPad Pro appears to be a significant leap forward for Apple's premium tablets.

We already know the iPad Pro will deliver laptop-caliber performance, but if the Magic Keyboard's trackpad plays nicely with iPadOS 13.4's cursor support, then this could be the laptop replacement we've been waiting for.

That said, we have reservations about pricing. The iPad Pro was always going to cost around $1,000, but $299 for a keyboard is absurdly expensive, even for business or professional users. Still, we're excited to get these slates in for testing to see if they can really replace your laptop.