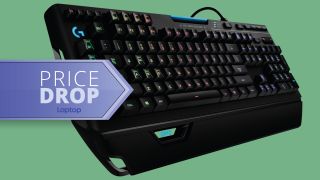 Black Friday deals are pumping through the internet like no tomorrow, and right now the Logitech Orion Spectrum G910 is $90 off. For just $89, you can get one of Logitech's slick, mechanical gaming keyboards.

We didn't get a chance to review the Logitech Orion Spectrum G910, but Logitech generally has a pretty great record producing mechanical keyboards and this specific model has a 4.7-star rating after 1,471 user reviews. The Orion Spectrum G910 offers 9 programmable G-keys, customizable RGB lighting and dedicated media controls.

Apart from looking pretty cool, this keyboard also has 113 anti-ghosting keys, a large palm rest and propriety mechanical switches that you won't find on any other keyboard. On top of all of that, the Logitech Orion Spectrum G910 has a smartphone dock that lets you access in-game data on your phone via the integrated "arx control" app.

If you're looking for something different, take a look at our best Black Friday deals and best Cyber Monday deals hubs to see more hot products on sale.