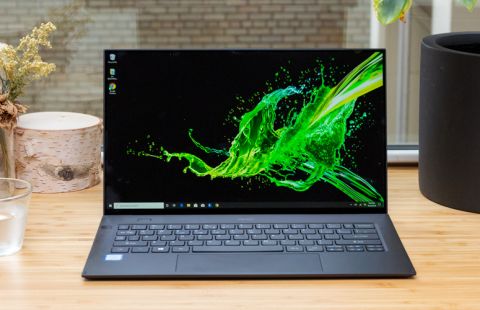 Acer's incredibly thin Swift 7 is an excellent laptop, even if corners were cut in the name of portability.

Acer knows extremes. Between the lightweight Swift 5 and the monstrous Predator Helios 700, Acer has pushed the boundaries of laptop design in every direction. Now it's improving upon a laptop we fell in love with last year: the Swift 7. Just like its predecessors, this year's Swift 7 has an impossibly thin chassis that you'll want to show to all of your friends. And while portability is the highlight of the Swift 7, this attractive laptop also offers a beautiful 14-inch display and surprisingly long battery life.

As expected, compromises were made to fit everything into such a slim chassis, with the biggest disappointments being underwhelming performance, weak speakers and an unflattering webcam. Still, the Swift 7 is one of the best laptops available for those looking for an ultraportable machine.

Acer sells a couple of different configurations of the Swift 7.

Business users might want the $1,899 edition of the Swift 7, which has the same specs but upgrades you from Windows 10 Home to Windows 10 Pro. But we recommend you do that yourself to save some money.

Manufacturers used to boast about how their laptops were similar to the size of a traditional notebook. Acer is better off comparing its latest flagship with sheets of paper.

I could go on and on about the Swift 7's incredible sleekness, but this really is a case of "You have to see it to believe it." The best I can do is compare the thickness of the Swift 7 with other ultraportable laptops.

A closer comparison can be made between the Swift 7 and a modern smartphone; Google's new Pixel 4XL and the Apple iPhone 11 Pro are both 0.3 inches thick. Add a chunky case to those phones and they might even stand above the Swift 7.

The Swift 7 isn't just thin, it's also supercompact. That's because of the practically bezel-less display, which gives the laptop a screen-to-body ratio of 92%.

Beyond these absurd dimensions, the Swift 7 has a regal aesthetic that doesn't try to do too much. The laptop's lid has a simple gold chrome Acer logo that's mirrored on the deck. On the inside of the laptop, you'll find a power button that doubles as a fingerprint sensor and a pop-up webcam (more on that below). Swooping curves near the ports give the Swift 7 the sort of elegance you associate with a luxury car.

Our black color variant has unique hues that range from chocolate to slate, depending on how the light hits it. It looks great, but if fingerprints bother you, go with the white version.

Acer promises that the "micro-arc oxidation" finish to the lid of the laptop will prevent scratches, which is a relief because, in our experience, magnesium alloy tends to show more marks than aluminum.

Dual Thunderbolt 3 ports on the right side of the Swift 7 are all you get on this superthin laptop. At least you can charge the laptop and another device simultaneously, which you couldn't do on Apple's now-retired 12-inch MacBook.

I thoroughly enjoyed watching videos and browsing the web on the Swift 7's 14-inch, 1080p touch-screen display. Thin bezels drew my eyes into the wide panel, which greeted me with reasonably vivid colors and decent brightness.

When I watched a trailer for Jumanji: The Next Level, Kevin Hart's saturated red neckerchief stood out against the lush green jungle. The screen captured enough detail for me to see individual strands of white hair in Danny DeVito's beard and the vicious fangs of an angry mandrill, whose face had natural blue and red tones. The only thing spoiling my viewing experience was the office lights reflecting against the Swift 7's glossy panel.

I found the Swift 7's touch screen to be very responsive. Given my qualms with the laptop's touchpad (see below), I was more than happy to use the touch screen as my primary way of navigating the web.

To accommodate such a thin design, Acer equipped the Swift 7 with a low-power Y-series CPU. Specifically, the Intel Core i7-8500Y.

Given its low-power chip, I expected the Swift 7 to slow down during my real-world testing, but the laptop chugged along without as much as a whimper. I noticed some brief skipping as animations loaded on a large web page, but otherwise, I had no problems browsing the web, even with 15 Google Chrome tabs open and four 1080p video streams running in the background. That said, don't expect the Swift 7 to give you the same performance as larger laptops packing U-series or H-series processors.

Whether you bust out a pair of headphones or connect some computer speakers, do yourself a favor and don't use the Swift 7's built-in speakers as your primary means of listening to music. The laptop's quiet and shrill bottom-firing speakers evoke the intercom system in an aging New York City subway train.

The hollow, distant vocals and anemic bass in Kanye West's "Dark Fantasy" reminded me of the old Apple earbuds my teenage self blew out listening to angst-y, pop-punk music too loud. Yes, I'm exaggerating a bit — these speakers will do in a pinch — but seriously, Swift 7 owners should also be headphone owners.

I had some trouble typing this review on the Swift 7's backlit keyboard. I actually don't mind how the keys feel. Yes, they're extremely shallow and I bottomed out regularly, but the keys are well spaced, reasonably clicky and have that lovely audible "snap."

My problem with the keyboard is its unconventional layout. My fingers repeatedly pressed the miniature delete key instead of the backspace key next to it. If only those keys had been reversed, then I wouldn't have had as much trouble. Also, the shortcut keys don't get their own row, so I had to hold the Fn key and the up arrow to increase volume and use Fn+E to extend my display to a monitor. Worst of all, there is no mute shortcut.

I typed at 126 words per minute with a 98% accuracy rate on the 10fastfingers.com typing test. Those are some of the best scores I've ever achieved and a big improvement over my 119-wpm at 95% accuracy averages.

The old Swift 7 was a nightmare to use because its touchpad didn't have buttons or haptic feedback. Now with left- and right-click buttons, the new 5.5 x 2-inch touchpad is undoubtedly an improvement over the original version.

But there are still problems. The touchpad is easy to brush with your palm because of how awkwardly long the surface is. That wouldn't be an issue with a proper palm-rejection feature but there is no such thing on the Swift 7; my palms inadvertently pushed my cursor across the screen enough to make me want to Frisbee-toss the Swift 7 out the window.

MORE: How to Get the Full Layout in Windows 10's Touch Keyboard

The surface also occasionally registered a pinch-to-zoom gesture instead of a two-finger scroll when I tried using Windows 10 touchpad gestures.

You can forget about playing the best PC games on the Swift 7. The integrated Intel UHD 615 graphics paired with Intel's Y-series chips can't do much beyond play online games and load web animations or videos.

I'm really impressed by the Swift 7's battery life. Not that the laptop's runtime on our battery test (which involves continuous web surfing over Wi-Fi at 150 nits) of 8 hours and 56 minutes breaks any records; I just never would have guessed that such a thin device could last an entire day on a charge.

Where do I even start? I honestly wish Acer had abandoned the webcam altogether, if only to save a few bucks. Instead, Acer chose to embed the webcam into the deck, above and on the left side of the keyboard. As a result, the webcam captured my fingers as I typed, and my chest when I moved my hands away.

To get the camera to capture your face, you either need to lift the deck of the laptop so that it's at eye level with you or hunch your back like Quasimodo. It's a real shame, because of all the integrated webcams I've tested, the Swift 7's 720p lens has some of the best image quality; my face had natural colors in a selfie I snapped, and there was plenty of detail without all the noise I'm used to seeing.

If you never use a webcam, then the webcam's location shouldn't faze you. If you do, we strongly recommend investing in one of our favorite external webcams. The only problem is that many of those options mount to a laptop's lid, and there is virtually no bezel space above the Swift 7's display.

The Swift 7's low-powered Y-series CPU is supposed to allow for a thin, fanless design, but Intel didn't seem to think anyone would go this thin.

We played a 15-minute, 1080p YouTube video to see how well the Swift 7 kept its cool. While the touchpad warmed to only 85 degrees Fahrenheit and the bottom panel peaked at 98 degrees, the top of the deck (just above the keyboard) reached a scalding 108 degrees.

The heat was noticeable during everyday use. I reflexively snatched my fingers away from the deck of the laptop on multiple occasions because of how hot the Swift 7 got while I browsed the web or streamed videos.

I wish Acer didn't include so many preinstalled apps onto its laptops. Piled on top of the usual Windows 10 Home suspects are more than half a dozen apps from Acer and third-party partners.

Of those, Care Center is the one you want to keep. From the main hub interface of this app, you can see information about your system, search for firmware updates, do a checkup on your laptop's components and create recovery backups. Acer's other apps simply direct you to legal documents and a user manual.

Feel free to delete Acer Collection S and App Explorer, both of which give you Windows Store app recommendations. Content creators might want to keep PhotoDirector and PowerDirect for when they need to edit photos and videos.

Also installed on the Swift 7 are a handful of Windows 10 Home apps, including Bubble Witch 3 Saga, Candy Crush Friends, Amazon, Booking, eBay, Evernote and Hearts Deluxe, to name a few in a list that should be much shorter on a premium laptop.

Acer includes a one-year limited warranty with the Swift 7. See how Acer fared in our Best and Worst Brands and Tech Support Showdown special reports.

The Swift 7 isn't a gimmick; it's a solid notebook with a gorgeous display, a premium design and surprisingly long battery life. But don't let me mislead you, the razor-thin chassis is absolutely the reason you should buy the Swift 7 rather than another ultraportable laptop.

Take away its thinness, and the Swift 7 loses much of its appeal. That's because Acer had to make several compromises to accomplish the design feat, including packing the Swift 7 with an underpowered processor, an awkward keyboard and touchpad, and a practically unusable webcam. As a result, the Swift 7 lags behind our favorite ultraportable laptops, like the Dell XPS 13 or Lenovo ThinkPad X1 Carbon. However, none of those is nearly as portable.

More
Be In the Know