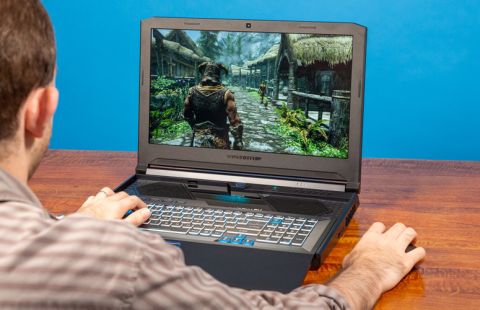 The Acer Predator Helios 700 is ridiculously powerful and has a comfortable keyboard, but its dull display and poor audio work against it.

The Acer Predator Helios 700 is quite literally a battle station. When the Helios 700's comfortable HyperDrift keyboard drops into position, the supereffective cooling kicks on and the system overclocks its powerful 9th Gen Core i9 CPU and RTX 2080 GPU. But even for a whopping $3,999, the Helios 700 can't fully deliver, with its lackluster display and speakers. Regardless, this is still one of the strongest gaming laptops you can buy.

Even if you want to save the most money, the base model will run you $2,199, and that'll drop you to an RTX 2070 GPU from the midrange model. If you're looking for something in a cheaper wheelhouse, take a look at our best gaming laptops under $1,000 and our gaming laptop buying guide.

Despite charging you the price of an old car, the Predator Helios 700 sports a plastic top cover. This laptop has two blue glossy curves on either side of the lid. At the center sits the Predator logo, with blue backlighting. The machine is thick and sturdy, but when I ran my fingers across the lid, it flexed.

The exterior is kind of boring, but the magic really happens on the inside. The interior features Acer's HyperDrift keyboard, which offers two modes: docked and undocked. When the keyboard is docked, it's in its normal position, which offers regular speeds. But you can undock the keyboard by sliding it toward you, revealing an RGB-lit glass panel with heat pipes underneath. This not only triggers overclocking, but also increases airflow as it exposes two intakes on either side of the pipes. This may be a little too gaudy for some, as our lab tester Jorge Jimenez stated, "It looks like a Transformer stuck midtransformation — my wife would divorce me if I brought that home."

When you slide the keyboard down, the section with the palm rests and touchpad bends at an angle, doubling as an ergonomic wrist rest. The bezels on the display are mighty thick as well.

This monster has a wide variety of ports.

On the left, you'll find an RJ45 Ethernet port, two USB 3.1 ports, a microphone jack and a headphone jack, while the right features one Thunderbolt 3 port, one USB Type-C port and one USB 3.1 port.

The backside has the power jack, a DisplayPort and an HDMI 2.0 port. If you're interested in expanding the ports, you could always pick up a docking station or a USB Type-C hub.

The Predator Helios 700's 17.3-inch, 1920 x 1080 display is decently bright and features a smooth, 144-Hz refresh rate powered by Nvidia G-Sync technology. But the panel is comparatively dull for a gaming laptop. You may want to get a gaming monitor.

In Shadow of the Tomb Raider, I could see the details on the surrounding walls in a dark, underwater cavern. Each strand of hair on Lara Croft's head was sharp, but her blue shirt, brown hair and brown eyes weren't as vivid as they could have been. When I turned the settings down a notch, exploring and swimming underwater felt fluid (pun intended).

In the trailer for Jumanji: The Next Level, I could make out a lamp and the cracked window in the background of Danny DeVito's dimly lit basement. The Predator Helios 700's panel detailed DeVito's sharp beard and the strands of hair on his head. But while the lush greenery that surrounded Karen Gillan was decently colorful, it didn't pop.

With the Predator Helios 700, you have two ways to type: docked and undocked. In docked mode, you get a pleasantly clicky keyboard with RGB lighting, but when the machine is in undocked mode, you benefit from an ergonomic palm rest.

I hit only 64 words per minute on the 10fastfingers.com typing test while the system was docked, falling under my 70-wpm average. But when I undocked the keyboard, I managed a solid 72 wpm. The keys traveled at a deep 2.2 millimeters and required a solid 70 grams of force to actuate.

The Predator Helios 700 comes with five replacement keys, backed by springs instead of a membrane cap. They're specifically for WASD keys and are designed to make character movement feel fluid. I tested this with Shadow of the Tomb Raider, and the movement did feel more natural. But when I typed with the replacement keys, it felt somewhat jarring. Profiles in PredatorSense enable the keys for gaming or typing, and you can adjust the actuation within those settings from 1.0mm to 2.8mm.

Just above the keyboard are three macro keys, and you can change three sets of profiles with the P button, so that's a total of nine macro keys. Technically, one of them is permanently assigned to switching the key profiles mentioned above, so that leaves you with eight assignable macros.

For RGB lighting, there are three zones: the keyboard, touchpad and heat pipe. The keyboard features per-key lighting and lighting effects like wave, breathing and raindrop. Meanwhile, the touchpad features static, blue lighting and the heat pipe as a static customizable RGB. You can configure all these settings through PredatorSense.

The 4.1 x 2.3-inch touchpad is soft, has a decent size and offers a satisfying pair of discrete clickers. Windows 10 gestures, like three-finger tabbing and two-finger scrolling, worked as intended. Despite that, you'll still probably want to pick up a gaming mouse.

The Predator Helios 700's forward-firing speakers are decently loud, but the audio is a little too sharp and lacks proper bass. When I listened to NF's "Let You Down," the opening vocals produced a somewhat whiny sound. The percussion and piano failed to pop, instead coming across as hollow — not to mention that they were overshadowed by the vocals.

I played Shadow of the Tomb Raider, and when I tossed one of the baddies off of a cliff, the ensuing thud sounded shallow. When Jonah came to help me up, his voice didn't have enough bass. The surrounding environment, with birds chirping and frogs croaking, was more annoying than immersive, due to its high pitch. You'll need a pair of headphones or set of external speakers if you want to get immersed in games using this machine.

The Helios 700 has the Waves MaxxAudio software, which gives you presets like Gaming General, Gaming FPS, Movies and Music. This software also gives you access to a full EQ and some dials for bass, details and width. I had to throw the bass to Max and the other two settings to roughly halfway to balance the sound for Music, but I still couldn't get the audio just right. For gaming, I set all the levels to roughly 50%, but I ultimately failed to achieve a full sound.

Underneath this beast's glass panel, shrouded in heat pipes, is an Nvidia GeForce RTX 2080 GPU packed with 8GB of VRAM. The Predator Helios 700 tore through Shadow of the Tomb Raider (Highest, 1080p) at 91 frames per second as I hopped from tree to tree and jumped in front of a group of enemies.

MORE: What to Look for in a Gaming Laptop - Buying Guide for Gamers

This monster is more than VR-ready, scoring a perfect 11 on a SteamVR Performance Test, matching the Area-51m, GT75 Titan and Eon17-X.

Powered by an Intel Core i9-9980HK processor and 32GB of RAM, the Predator Helios 700 sliced through 40 Google Chrome tabs and five 1080p videos like a lightsaber through Luke Skywalker's forearm.

Don't even bother using this machine unplugged. When I continuously surfed the web over Wi-Fi with the screen set at 150 nits of brightness, the Predator Helios 700's battery lasted a mere 1 hour and 43 minutes, which is nearly half of the premium gaming laptop average (3:11). The Area-51m (2:36), GT75 Titan (2:20) and Eon17-X (1:50) all outlasted the Helios 700. A portable charger probably won't power this machine, so if longevity on a charge is your concern, consider looking at laptops with longer battery life.

While the Predator Helios 700's 1080p webcam produced decently colorful shots, the overall image was dark. The blue and white on my shirt looked relatively accurate, but because the image was so dim, dark spots appeared all over my shirt.

The ceiling lights completely washed out their surroundings. I could see the detail in my gelled-up curls, but the image was still grainy when I zoomed in. You'll want to pick up an external webcam.

We tested the Predator Helios 700 docked and undocked, but surprisingly, both methods kept the system relatively cool. However, in one downside to the good heat dispersal, the fans are incredibly loud.

After I played Shadow of the Tomb Raider for 15 minutes in docked mode, the underside hit 102 degrees Fahrenheit, which is slightly above our 95-degree comfort threshold. Meanwhile, the center of the keyboard and touchpad measured 89 and 81 degrees, respectively. The hottest the machine got was 110 degrees, on the left underside near the hinge.

MORE: Great Balls of Fire: The Effects and Causes of Laptop Heat

When the Helios 700 was undocked, the overclocking kicked on, and thus the fans blared. The underside reached 105 degrees, the keyboard got to 83 degrees and the touchpad hit 81 degrees. You may still want a lap desk, though, if only because this thing is huge.

The most important app to pay attention to on the Helios 700 is PredatorSense. It monitors the temperature for the CPU, GPU and overall system. You can manage CPU and GPU overclocking through the app as well. It also controls the lighting, hot keys and fans.

Acer additionally throws in the Acer Product Registration app and the Acer Collection S app (both apps curated by Acer). The company also includes PowerDirector, PhotoDirector and Norton Security Scan in its flurry of apps. There's some Windows 10 bloatware as well, such as Bubble Witch 3 Saga, Candy Crush Friends and Microsoft Solitaire Collection.

MORE: How to Set Up Your New Laptop Like a Pro: Out of the Box Tips

The Predator Helios 700 comes with a two-year limited warranty. See how Acer performed on our Tech Support Showdown and our Best and Worst Brands and Best and Worst Gaming Brands rankings.

The Acer Predator Helios 700 is a straight-up beast when it comes to performance. To top it off, this machine has a great cooling system and boasts a comfortable keyboard, all wrapped in an innovative design. Despite all that, the display and audio don't live up to gaming laptop standards.

As an alternative, you can pick up the MSI GT75 Titan for $4,199, and you'll get a supercolorful 4K display, a mechanical keyboard and excellent audio.

But overall, the Predator Helios 700 is a solid premium gaming laptop if you're craving performance.