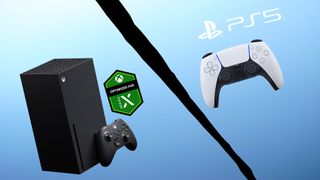 Microsoft already has the preorder page up for the Xbox Series X and while preorders aren't available yet, you can sign up to be notified the moment they go live.

Sony finally unveiled its PS5 console months after we first got a glimpse of the Xbox Series X. While it's not for everyone, it's not too much of a stretch to say that it is far more interesting looking than the Series X.

The box is predominately white and features sleek curves. There is a black middle section that slopes like a skateboard ramp. This is where the components are held and there appears to be some ventilation on the edges for cooling. Sony's signature blue lighting accents the edges of the box, giving the console a futuristic look. On the front of the console are USB-A and USB-C ports.

I really like how it looks but not everyone is so enthusiastic about the design. The divisive aesthetic has sparked some polarizing opinions, much like the new DualSense controller, which also features a mostly white color scheme with some black and blue accents.

Winner: Draw. Design is so objective that our preferences don't really matter here. The PS5 is objectively a more interesting looking console but it hasn't proven to be unanimously praised.

Both consoles will also feature custom SSDs that they are promising will deliver dramatically reduced load times versus the previous generation. Sony has been really pushing this message as it could be the winner on this front with dramatically faster (5.5 GB/s vs. 2.4 GB/s) throughput for its SSD.

Xbox Series X claims the title for backward compatibility champ with Microsoft promising the next-gen console will not only play all Xbox One games, but it will also include Game Pass games and over 600 Xbox 360 and original Xbox titles. In addition, Microsoft has stated that the older games will "play better than ever before" on the Xbox Series X with double the frame rate (30 to 60 or 60 to 120) on some games along with increased resolution and HDR support.

We finally got a glimpse at some of the games coming to PS5, and we weren't disappointed. Among them are Horizon: Forbidden West (the sequel to Horizon: Zero Dawn), Spider-Man: Mile Morales, Demon's Souls and Sackboy: A Big Adventure (seemingly a LittleBigPlanet spin-off) and Gran Turismo 7.

Those are joined by various indie games, including Stray, Kena: Bridge of Spirits, Little Devil Inside and Bugsnax (from the folks who made Octadad).

Also, some exclusive releases due out this year, such as Last of Us: Part II and Ghosts of Tsushima, will likely be ported to the new console.

Here is a full breakdown of all the games Sony has revealed so far for the PS5.

Winner: PS5: Spiderman, Horizon: Forbidden West, Demon's Soul -- just naming a few of the AAA titles coming to PS5, not to mention a host of interesting indie games. Until Xbox shows us more Halo, Sony wins this round.

While there is a lot yet to be decided, the Xbox Series X and PS5 are on level playing field as of now.

Sony continues to have the more popular lineup of exclusive titles and no major shakeups or announced exclusives have changed this yet. For nostalgic gamers, the Xbox Series X offers considerably more backward compatibility.

Get the best Sony PlayStation 5 deals before anyone else!

We'll send you pre-order details and the best Sony PlayStation 5 deals as soon as they're available.