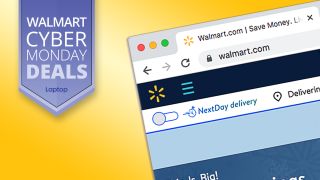 The best Walmart Cyber Monday deals have arrived. There's never been a better time to score huge discounts on laptops, tablets, and PC accessories. In some instances, Cyber Monday deals are as good as or better than Black Friday.

Below is a list of the steepest discounts on the best gadgets the retailer is selling.

So far, top deals include some of the lowest prices we've seen on the Apple MacBook Air, AirPods and the 10.5-inch iPad Pro. Along with those stellar Apple discounts, Walmart cut the price of some popular tablets and game consoles are selling at all-time-low prices.

Deals will continue to sprout up as we get deep into Cyber Monday, so bookmark this page for the steepest discounts on the best products Walmart sells.

Apple MacBook Air (128GB): was $1,099 now $969.99 @ Walmart
On sale is the latest version of Apple's popular MacBook Air. This ultraportable has a gorgeous display and a premium chassis. This deal is on the base model with a Core i5 CPU and 8GB of RAM.View Deal

Samsung Galaxy Tab S3: was $549.99 now $477.99 @ Walmart
With its beautiful, bright display, strong sound and fast performance, the Galaxy Tab S3 is one of the best tablets you can buy. It comes with an S Pen and can be paired with a Bluetooth keyboard. Get it now and save $67.View Deal

AirPods with Charging Case: was $159 now $144 @ Walmart
For a limited time, you can get the latest model AirPods with standard charging case for $20 off. It features Apple's latest H1 chip for faster wireless connectivity with Apple devices. View Deal

New MacBook Pro 13 (128GB): was $1,275 now $1,179.99
Get the latest MacBook Pro without breaking your budget. The 13-inch laptop offers a Core i5 CPU, a 12GB SSD and integrated graphics. Boasting 10 hours of battery life, this notebook is ideal for just about everything. View Deal

Acer Chromebook 14: was $299 now $149
You won't find a much cheaper laptop this holiday shopping season than the Acer Chromebook 14, which is selling for $159. It has excellent user ratings but should only be purchased for basic tasks.View Deal

Samsung Galaxy Tab A: was $219 now $149
This is a 10.1-inch tablet that runs Android P. While we haven't reviewed this model, user reviews are good across the board. The tablet has 32GB of storage.  View Deal

Samsung Galaxy Tab S3: was $549.99 now $477.99 @ Walmart
With its beautiful, bright display, strong sound and fast performance, the Galaxy Tab S3 is one of the best tablets you can buy. It comes with an S Pen and can be paired with a Bluetooth keyboard. Get it now and save $67.View Deal

Beats Solo3 Wireless Headphones: was $299.95 now $129 @Walmart
The Beats Solo3 wireless headphones deliver booming sound and 40 hours of battery life. Currently, you can score them for $100 off at Walmart View Deal

Sony PS4 Pro: was $399 now $299
If Walmart's main PS4 Pro bundle deal sells out, you can still get the PS4 Pro console for $299. Sure, there's no game included, but this is still the best price we've seen for Sony's 4K console and an amazing deal on its own. View Deal