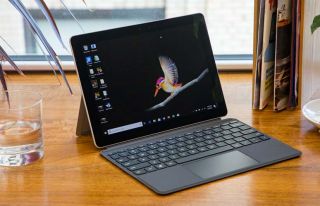 Microsoft's entry into the budget computing category was a successful one. The Surface Go, a $399 2-in-1 tablet, is an excellent secondary machine for students or frequent travelers, especially when you bundle in the optional keyboard and stylus. However, there is plenty of room for improvement if Microsoft wants to dethrone the Apple iPad.

We're nearing the one-year mark since the release of the Surface Go, which means it's time for the rumor mill to start grinding. Here is what you should expect from the Surface Go 2 and what we want to see in the upcoming model.

Microsoft hasn't officially announced a Surface Go 2, but we wouldn't be surprised if its sophomore debut were unveiled in mid-2020. For now, we can only speculate on when that might be. If you assume Microsoft adheres to an annual release pattern, then the Surface Go 2 will likely be unveiled before August.

A report from Petri's Brad Sams claims the device will launch in spring at a New York City hardware event.

The Surface Go is positioned as Microsoft's least expensive PC, and there is no evidence suggesting that will change. At $399, the Go is a good entry point into the lineup and into Windows 10 touch-screen devices in general.

Upgraded components could bring the price up slightly, but our money is on Microsoft setting a starting price at around $399. From there, Microsoft will almost certainly offer pricier configurations of the Surface Go 2 with additional RAM and storage. For reference, doubling the memory and storage of the current model raises its price by $150, while adding LTE connectivity costs an additional $130.

Of course, that price doesn't include the cost of a detachable keyboard and stylus, which brings the current base model up to a less budget-friendly $599.

As for the Surface Go 2's design, Microsoft will keep the familiar silver magnesium-alloy finish and rotating kickstand found on the Surface Go, according to Petri's Brad Sams.

If the company wants to keep its tablets up to date, it will adopt the slim bezels we've seen on other devices, including the new Apple iPad Pro. However, as the least expensive Surface, the Go might not receive that treatment ahead of the Surface Pro or Surface Laptop.

The introduction of a new black color variant was the one major change made to the Surface Pro 6's chassis. There's no word yet on whether the sleek paint job will find its way across all Surface devices, but we'd welcome it with open arms if it did.

Microsoft smartly included a USB Type-C port on the Surface Go (we're still waiting on the Surface Pro to get the same love), so there's not much it can do to improve port selection.

What is almost a given is that the Surface Go 2 will receive upgraded components. More specifically, the aging Intel Pentium Gold 4415Y CPU inside the Surface Go will be replaced with a newer Pentium Gold chip, according to Petri. The Pentium will be the lower-end option while a possible Core m-series chip would be an upgrade and offer faster performance.

We got confirmation from reliable leaker @_rogame who posted the full specs of the Surface Go 2; The tablet will pack an Intel Pentium 4425Y CPU on the low end and a Core m3-8100Y CPU on the high end.

Both configurations will come with 8GB of RAM and an Intel UHD 615 GPU. The cheaper model will ship with 128GB of storage while the Core m3 version will come standard with a 256GB SSD.

Further evidence in the form of a Geekbench benchmark listing (spotted by Windows Latest) also suggests Microsoft is working on a Surface Go 2 with a Core m3-8100Y CPU and 8GB of RAM. However, there's a good chance this is an upcoming higher-end SKU of the current Surface Go given that the model number is the same as the one used for the original tablet.

The Surface Go's 10-inch, 1800 x 1200-pixel display is outstanding, exhibiting vibrant colors and excellent detail. Given the universal praise given to the display, there is no reason for Microsoft to revise this formula.

What We Want from the Microsoft Surface Go 2

Long battery life: Improved battery life is, without question, what we want most from the Surface Go 2. The inaugural model fell flat in that department, lasting only 6 hours and 6 minutes on the Laptop Mag battery test (continuous web surfing over Wi-Fi at 150 nits). That is a poor result for a tablet and 4 hours short of the category average.

Better performance: The Surface Go offers strong performance, given its price, but it would be nice to have Intel Core CPU options, even if it's the low-powered Core m3-8100Y. A more efficient CPU could not only improve performance but also solve the aforementioned battery life issue.

Thinner bezels: As we previously mentioned, the Surface Go's display is excellent. Few laptops or tablets have better displays for the price. However, the 10-inch panel would offer a more captivating viewing experience if it were flanked by thinner bezels. This would help draw your attention to the gorgeous panel while potentially slimming the Surface Go's overall dimensions.

Keyboard and Pen included: We've been complaining about this for the better part of this decade, but Microsoft has held its ground on the issue. Sure, the Surface Go makes for a good tablet, but as Microsoft's marketing materials like to point out, Surface devices are meant to be detachables used with a keyboard and stylus. It's time to include them in the package.