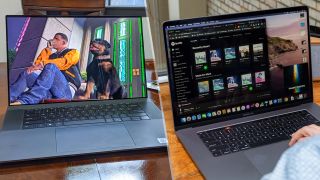 At long last, the Dell XPS 17 is available. So you know what that means? Face-off time! For this episode of laptop face-off, we have the long-awaited Dell XPS 17 and the 16-inch MacBook Pro. Both laptops are serious powerhouses and are workstations hiding in premium laptop chassis.

In one corner, you have the Dell XPS 17, which is a larger version of its smaller sisters, the Dell XPS 13 and XPS 15. But despite its supposed largeness, it’s actually smaller than a lot of 15-inch laptops currently on the market. Plus, you get a powerful 10th Gen Intel processor, an agile SSD, an Nvidia Max-Q GPU and an impressively bright and vibrant super high-resolution touch screen.

But not so fast. In the other corner, you have the 16-inch version of the laptop that launched a sea of clones –– the MacBook Pro. The laptop’s iconic design hides an overclockable 9th Gen Intel CPU with AMD graphics. The notebook has its own searingly fast SSD, the company’s always-great Retina display, and seriously long battery life. Each laptop is primed and ready for any productivity/creative/multimedia tasks you set before them, but which system reigns supreme?

Well, we’ve got two silver foxes on our hands. We’re all familiar with Apple’s anodized aluminum frame available in either Space Gray or Silver. The lid is marked with the glossy, iconic half-eaten fruit emblem in the center of the lid. Upon opening the lid, you get more of that gray or silver aluminum, which comprises the majority of the palm rest and deck.

The Force Touch trackpad is positively massive and sits below the black, island-style keyboard that resides in a slight recess. And directly above the keyboard is the Touch Bar, which gives you different menu options depending on the current application. The keyboard is located between a pair of top-firing speakers.

Just like the MacBook Pro, the XPS 17 has a platinum silver anodized aluminum along the exterior. A shiny Dell emblem sits in the center of the lid and the sides of the notebook are slightly chamfered for a bit of extra shine. The notebook’s palm rest and keyboard deck are made from black carbon fiber. A large portion of the palm rest is occupied by a gigantic touchpad. The keyboard, which is flanked by a pair of speakers, sits directly above the touchpad.

Both laptops lack legacy ports. Instead, the MacBook Pro and XPS 17 have a pair of Thunderbolt 3 ports on either side. Both systems have a headset jack on the right side, but the XPS 17 has a wedge lock slot on the left side. Recognizing that you might want to connect a mouse or some other peripheral, Dell ships a USB Type-C to USB Type-A dongle.

Both notebooks have positively beautiful displays. But side-by-side, the XPS 17’s 17-inch, 3840 x 2400 touchscreen has no competition. When I watched the Miss Juneteenth trailer on both notebooks, actress Nicole Beharie’s honey brown skin looked warm and lifelike. However, the rose-pink blouse looked somewhat fluorescent on the XPS 17. It definitely drew your eye, but the hue looked a bit more natural on the MacBook Pro’s 16-inch, 3072 x 1920 display.

If I was choosing a winner based on bezel size, or lack thereof, the Dell and its InfinityEdge design would get the prize. Now removed from all four sides, those thick unsightly bars and thick chin are a thing of the past. Apple has definitely shrunk the bezels on the MacBook Pro, but it’s nowhere near what you get with the Dell.

When it was time to measure for vividness, the XPS 17’s panel reproduced an impressive 172% of the sRGB color gamut compared to the MacBook Pro’s 114%. The XPS 17’s display was also noticeably brighter, averaging 505 nits while the MacBook Pro reached 429 nits.

Some other advantages the XPS 17 has over the MacBook Pro is Dell Premier Color software, which allows you to tweak the color temperature, gamut and brightness. You also have Dell CinemaColor, which has settings designed to reduce eye strain. Plus, the 10-point touch capacitive panel is made of tough Corning Gorilla Glass 6, so it can withstand a few bumps.

That’s not to say Apple didn’t give the MacBook Pro any goodies. The notebook has the company’s True Tone technology, which allows the laptop to automatically adjust its color temperature based on the environment. You can also adjust the screen’s refresh rate.

When it comes to audio, at least during this face-off, six speakers are better than four as the MacBook Pro plainly proved. The notebook’s top-firing speakers delivered loud audio that I could clearly hear, even when I went downstairs leaving the laptop on the top floor. Although the XPS 17 isn’t as loud as its competitor, it delivered a cleaner, more precise performance. Listening to Rosie Gaines’ “I Can’t Get You Outta My Mind, the MacBook was hands-down louder than the XPS 17. However, the keyboard instrument sounded a tad distorted at full volume. I heard a more restrained presentation on the XPS 17, which allowed me to better hear the drums and lows on the track.

However, when it came to bass-heavy tracks, like Meghan Thee Stallion’s “Captain Hook,” I preferred the more aggressive performance of the MacBook Pro. The bass sounded deeper on the Apple system than on the Dell and it gave Meghan’s salacious rhymes room to shine.

It’s magic! Magic keyboard that is. After many consumer complaints, Apple got rid of the uncomfortable Butterfly keyboard for the clickier island-style Magic Keyboard. The scissor-switch mechanism below the large keycaps makes for a firm feedback and a satisfying click when a key is pressed. The XPS 17, which has its own Chiclet-style keyboard is comfortable, with deep feedback and clickiness of its own. However, it’s a bit mushy for my tastes.

When I took the 10fastfingers typing test on both systems, I reached 75 words per minute on the MacBook Pro compared to 73 wpm on the XPS 17. Both results were higher than my usual 70-wpm average.

Each laptop is laden with a massive touchpad that delivers a quick, accurate response when performing gestures, such as pinch-zoom, two-finger scroll and three-finger flick. The XPS 17’s touchpad measures 3.5 x 6 inches, which seems huge. However, the MacBook Pro’s ForcePad is even larger, at 3.9 x 6.3 inches.

But on our synthetic benchmarks, there could only be one. When we ran Geekbench 5.0, our overall performance test, the XPS 17 achieved 7,740. The MacBook Pro was hot on its heels at 7,201. Both notebooks dusted the 4,278 premium laptop average.

The MacBook Pro had a bit of revenge on the Handbrake test, taking only 8 minutes to transcode a 4K video to 1080p. This time, the XPS 17 was the one playing catch up with a time of 8:41. Again, both laptops were much faster than the 18:43 category average.

During the File Transfer Test (duplicating 4.97GB of multimedia files), the XPS 17’s SSD clocked a transfer speed of 620.6 megabytes per second. Unfortunately, MacBook’s don’t play nice with this test, forcing us to use the BlackMagic read/write test where the Apple machine hit 1,1017.9 MBps.

Are you interested in photo editing, video editing and maybe a bit of gaming? The XPS 17, with its  Nvidia GeForce RTX 2060 Max-Q GPU with 6GB of VRAM, is the one for you. The notebook also has an integrated Intel UHD Graphics GPU for those moments you aren’t video editing or gaming. The MacBook Pro serves up an AMD Radeon Pro 5500M GPU with 8GB of VRAM.

In spite of their super-high-resolution displays, the MacBook Pro and XPS 17 delivered impressive times on our battery test (continuous web surfing via Wi-Fi over 150 nits of brightness). The MacBook Pro lasted 10 hours and 55 minutes, surpassing the 9 hour and 7-minute average. The XPS 17 was just 2 minutes behind the average at 9:05.

Whether you’re writing reports, creating content or gaming, there’s little the Dell XPS 17 can’t handle. The supersized premium system delivers powerful overall and graphics performance with a swift SSD and a captivating 4K panel, all in an attractive, fairly slim frame. And while our review unit is on the pricier side, it’s still cheaper than the MacBook Pro. Plus, Dell offers a more affordable base model.

But that’s not to write off the MacBook Pro. It’s a powerhouse in its own right and more often than not is the laptop du jour of creative professionals the world over. You get a lovely display, great performance and nearly 11 hours of battery life. It’s also lighter and smaller than the XPS 17, making it easier to slide in a bag for a commute. But no matter how you slice it, these laptops are at the pinnacle of the premium laptop royalty.