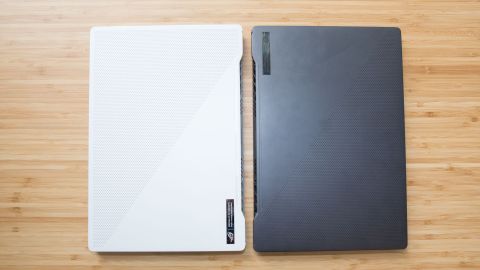 LAS VEGAS, NV –– Someone put a Lite-Brite in a gaming laptop and I love it! Pushing the idea of what we consider gaming laptops even further, Asus unveiled the ROG Zephyrus G14 and G15 notebooks at CES 2020. Set to launch either Q1 or Q2 of this year, Asus continues to push the boundaries of design adding its proprietary Anime Matrix display, a set of customizable LED lights embedded in the lid of the laptop.

Asus has yet to release pricing for either the Zephyrus G14 or G15. They did however, release a host of specs. Both laptops will feature up to an AMD Ryzen 7 4800HS processor, signaling a refreshing return of AMD to premium gaming laptops. Both notebooks will have up to 32GB of RAM and a max 1TB M.2 NVMe PCIE SSD. The G14 will only feature an Nvidia GeForce RTX 2060 GPU with 6GB of VRAM, but the G15 will also give gamers the option of a GTX 1660Ti with 6GB of VRAM.

But rest assured, Asus didn’t cut corners to make weight. Both laptops are made from a fingerprint-resistant magnesium-aluminum alloy that's cool to the touch. The top half of the lid is covered in a cool dot matrix pattern that hides a unique light show. Both notebooks are available in either Eclipse Gray or Moonlight White, the latter of which is my favorite.

The interior of the laptop has more magnesium-aluminum alloy with a full keyboard and a display surrounded by very slim bezels. Asus has finally brought on of its most functional, yet overlooked design innovations, the ErgoHinge to the Zephyrus line. That means as the laptop is opened the lid will raise the keyboard deck to a slight angle for a more comfortable typing experience.

Gaming, editing video or just bingeing The Witcher on Netflix, you'll want to do it on the G14's 14.1-inch, 1920 x 1080 120Hz display. It's got rich, sumptuous color, crisp detail and it looks pretty bright. That's in large part because the screen is Pantone validated. But more importantly, the panel has AMD FreeSync technology, which works to sync up the GPU with the display's refresh rate for smoother image renders.

When I told my boss about the Zephyrus, he said, "sounds like someone shoved a Lite-Brite into a gaming notebook." It's a fair assessment, but just a little off the mark. Asus' Anime Matrix is a grid made up of 1,215 mini-LED boasting 256 levels of brightness. Available on select Zephyrus G models, Anime Matrix is a fun way to show off your individuality.

Using a feature within Asus’ Armoury software, creative people can create custom design that will flash across the lid. You can also import animated gifs as evidenced by a gif of Mario jumping out of a pipe or Pikachu making a cute face. But the Anime Matrix has more functional uses such as giving email notifications or showing the time and date.

It’s a really cool feature that I can’t wait to play with. However, if I have one gripe, its that the mini-LEDs only flash white. And yes, I know this is the first time something like this has ever been done, but the gaudy gamer in me want RGB. Maybe next time.

Asus is claiming 10 hours of battery life from the Zephyrus G14. Since this is primarily a gaming laptop, I doubt that the laptop will come close to that number. And with the Anime Matrix, I’d be surprised if the notebook lasted 4 hours, but I guess I’ll just have to wait and see.

Just when I thought I had seen everything a gaming laptop had to offer, here comes Asus with something way from left field. The Asus ROG Zephyrus G14 and G15 are sporting sexy, slim designs that are already showstoppers –– they’ve even incorporated the company’s ErgoLift design for more comfortable typing. But Asus is raising the bar by launching AMD-powered laptops and incorporating the innovative Anime Matrix technology. Yes, it’s sort of kitchy, but it’s a great reminder that the sky’s the limit when it comes to laptop design.