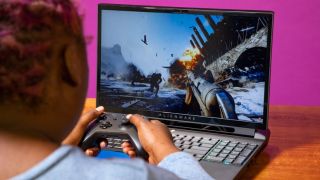 Only the best VR-ready laptops are capable of handling virtual reality headsets like the Oculus Rift S and the HTC Vive Cosmos. And since we tested a bunch, we know which ones will power the VR headsets that'll grant you all of your immersive experiences, including 360-degree games, apps and videos

The best laptops with the proper specifications such as Nvidia's 10-series GPUs or the company's Max-Q GPUs, which essentially make even the smallest laptops a virtual reality powerhouse, will do the trick.

But Nvidia's latest RTX chips, the 2060, 2070 and 2080 (along with Max-Q variants), will give you stronger gaming performance and the option to enable ray-tracing (a realistic lighting system). Of course, we’ve yet to see ray tracing implemented in any AAA VR games. The era of RTX isn't simply a refresh of our best gaming laptops, but a complete redesign of the best VR-ready systems. We're currently working on our review for the HTC Vive Cosmos Elite, so stay tuned for that.

What are the best VR-ready laptops?

The best VR-ready laptops can get pretty pricey, especially when you look at the top of our list at the Alienware Area-51m. Armed with a desktop Intel Core i9 processor and one of Nvidia's superpowered RTX GPUs, it absolutely demolished every test we put in front of it with graceful aplomb. It will also make a big dent in your wallet. But you consider that this is the first future-proof gaming laptop, it seems a small price to pay for a truly upgradable system and what Alienware is calling its first real desktop replacement.

The Razer Blade 15 lineup are consistently great VR-ready laptops, especially for those who want something portable to carry around. The company's latest offering is available in a stunning white chassis that's sure to draw every eye in the room. But as pretty as the exterior is, you'd be remiss to ignore the interior. Powered by an Intel Core i7 processor and one of Nvidia's new RTX GPUs, the Blade 15 is power personified.

If you’re looking for a VR-ready laptop for professional purposes, aka not gaming, then you should consider picking up a workstation. MS’s WS65 9TM will do the trick. For the luxurious price of $3,499, the WS65 packs a powerful 9th-Gen Core i7 processor and Nvidia Quadro RTX 5000 Max-Q GPU into a superslim, durable chassis. Top that off with solid battery life, and a gorgeous 15.6-inch, 4K display that you can enjoy when you’re out of the headset.

The best VR-ready laptops you can buy today

The best VR-ready laptop you can buy

If you want to put a hole in your bank account, this is the way to do it. For $5,099, the Alienware Area 51-m will offer you all the power you could ever need with its 9th Gen Core i9 desktop processor and RTX 2080 GPU. This baby maxed out the SteamVR Performance Test without breaking a sweat. We crept up to an enemy base in Battlefield V (1920 x 1080, Ultra settings). But it wasn't long before our cover was blown and we were tossing a grenade at a group of explosive barrels, which went up in a cloud of red, yellow and orange flame at 122 frames per second.

Along with the Area 51-m’s awesome power, you get a gorgeous sci-fi inspired chassis that packs lightning fast SSDs and a solid 17.3-inch, 1080p panel. To top it all off, its major components are completely upgradable. This is easily at the top of the best VR-ready laptops.

On top of its power, it features a sexy sports car design, a display that covers 153% of the sRGB color spectrum, a keyboard with 1.4 millimeters of travel and a battery that can last up to 4 hours and 28 minutes on a charge.

In an effort to cut down on its beefy gaming laptops, Alienware developed the Alienware m15, a 0.7-inch slim speed demon. The laptop is still a head-turner with its Epic Gray anodized aluminum lid, black magnesium underbelly and strategically placed customizable LED lights. The Alienware m15 also has a bangin' 4K OLED display that covers 265% of the sRGB color gamut and emits 376 nits of brightness.

You can cram an 8th Gen Core i7 CPU and RTX 2070 Max-Q GPU into this baby, and despite being Max-Q, it still blows away the SteamVR performance test with a perfect 11. In Far Cry: New Dawn, a well-placed circular saw blade from my saw cannon gruesomely found a home in a nearby enemy, chewing up his flesh at 59 fps in 1920 x 1080 on Ultra settings.

Asus is pushing innovation with this wacky new gaming laptop / 2-in-1 / detachable monster, otherwise known as the ROG Mothership. What sets this apart from most gaming laptops is its adjustable kickstand and detachable keyboard, so all of the components are actually behind its 17.3-inch,1080p panel.

And its badass name does it justice, as it's armed with an Intel Core i9-9850HK processor, up to 64GB of RAM, three NVMe M.2 PCI SSD in RAID 0 configuration and a Nvidia GeForce RTX 2080 GPU with 8GB of VRAM. It powered through Rise of the Tomb Raider (Very High, 1080p) at 86 fps. The keyboard's island-style keys are nice and big with good spacing. Meanwhile, its 1080 panel wasn't overly saturated and delivered warm, realistic color. The performance speaks for its ranking as one of the best VR-ready laptops.

The advanced model of the 15.6-inch Razer Blade once again takes the lightweight crown. The Razer Blade 15 ($2,649) retains its 0.7-inch thin chassis while pumping an 8th Gen i7 processor comboed with the GeForce RTX 2070 Max-Q GPU through its VR-ready veins. The Blade 15 nailed a perfect 11 out of 11 on the SteamVR Performance Test.

Within its svelte design lies a battery that lasts over 5 hours, which topples competing companies like Asus and MSI in terms of portability. And when you’re not in VR, you get a colorful 144-Hz display surrounded by paper-thin bezels that make it that much more charming. You can also check out our face off between the Razer Blade 15 and the Aero 15 Classic.

MSI’s GT76 Titan got a major redesign and looks as dazzling as it has ever been. Decked out in a slate-gray aluminum and a black plastic undercarriage, the notebook looks like an imposing set of armor ready to protect a gamer headed into battle. It's still boasting Nvidia’s latest RTX 2080 GPU, maxing out the SteamVR Performance Test with ease and being able to nail 79 frames per second on the Shadow of the Tomb Raider benchmark (Ultra, 1080p).

At 10 pounds and 1.3~1.7 inches thick, the GT76 Titan also packs an overclockable 9th Gen Core i9 processor accompanied by a vivid 4K panel. While it doesn't have a mechanical keyboard, the keys were large, generously spaced and offered bouncy feedback without a hint of bottoming out. MSI made this one of its best VR-ready laptops.

Nvidia has found a way to take the most powerful graphics card around, the RTX 2080, and work some Max-Q magic to fit it in the MSI GS75 Stealth’s 0.7-inch slim chassis.  As I sat at my desk contemplating how to describe the Stealth GS75, I found myself lost in its aluminum hood -- transfixed by the sparkling sandblasted finish that encompassed a seemingly endless black space.

Its svelte stature is paired with a 17.3-inch panel that is like witnessing a light prism blast you with the full force of a rainbow at 144Hz with a 3 millisecond response time -- I am feverishly in love. Not to mention that this baby has a great pair of Dynaudio’s top-firing speakers. And of course, the GS75 Stealth had no issue maxing out the SteamVR Performance Test.

The MSI WS65 9TM packs a beastly Nvidia Quadro RTX 5000 GPU with 16GB of VRAM, which is more than capable of handling VR despite being designed for 3D modeling, video editing and engineering. It even has a mini DisplayPort at the ready for all of your VR adventures.

Its 17.3-inch, 4K display is also ridiculously vivid, as it covered 251 percent of the sRGB color gamut and emitted 393 nits of brightness. Jack Black's green-and-brown bow tie in the Jumanji: Next Level trailer might've been glossed over on another panel because of the darker shades, but it popped on the MSI WS65's panel. On top of that, the MSI WS65 passed several MIL-SPEC durability tests and even has a decently long battery life for a souped up workstation.

How to choose the best VR-ready laptops for you

Before you get around to choosing the best VR-ready laptop for you. Consider the specs you’ll need in the gaming laptop you’re looking at.

Here are the VR minimum specs:

The main thing you have to worry about when picking out a VR-ready laptop is what kind of specs it has and if it has a mini DisplayPort. Anything apart from those features are negligible if you’re just focused on the VR portion, but you should be mindful of the display, keyboard and size of the laptop, as you’re likely to use it as a normal gaming laptop as well.

If you’re on a budget, consider looking at laptops with a lower-end Nvidia GeForce GTX GPU, such as the Lenovo Legion Y7000. It won’t be ideal, but it’ll get your VR setup up and running. Of course, you can spring for a laptop with an RTX GPU, like the Alienware Area-51m, which would absolutely kill it in VR, but that’s going to cost you. Overall, you have to figure out your budget and what’s important to you in a VR-ready laptop.

How we test the best VR-ready laptops

We put each laptop through extensive benchmark testing — both synthetic and real-world — before they end up in the hands of our reviewers. We evaluate each aspect of the laptop, including its performance, battery life, display, speakers and heat management.

In our benchmark testing, we use a Klein K10 colorimeter to detect the brightness and sRGB color gamut of the laptop's display. For performance testing, we run the laptop through a gauntlet of benchmarks, including Geekbench 4.3 and 5.0 and 3DMark professional graphics tests.

To determine real-world performance, we task the laptop to convert a 4K video to 1080p resolution and to duplicate a 4.97GB multimedia file. Our real-world graphics test is the Dirt 3 benchmark with medium settings at 1080p resolution.

We also run heat tests by playing a 15-minute full-screen video and measuring temperatures in different areas of the laptop. Last but not least, our battery test consists of continuous web surfing over Wi-Fi at 150 nits of brightness. For MacBooks and premium Windows 10 laptops, a runtime of over 9 hours is considered a good result whereas gaming laptops and workstations that can stay powered for longer than 5 hours deserve praise.

These tests are complemented with extensive hands-on testing from our reviewers who critique everything from the laptop's materials to the feel of its touchpad.