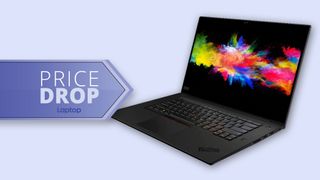 Black Friday deals won't stop coming, and right now you can pick up the Lenovo ThinkPad P1 Gen 2 for just $1,699, at $1,700 off, with the code SANTABABY. If you're a power user or video editor, you won't want to miss this deal.

In our Lenovo ThinkPad P1 review, we found that last year's model had great performance, a vivid display and a world-class keyboard. It's one of the best video editing laptops and best workstations you can buy, and we expect the Gen 2 model to be even better.

The model on sale comes with an Intel Core i7-9850H CPU, an Nvidia Quadro T2000 GPU, 16GB of RAM and a 512GB SSD. It also has a 15.6-inch, 4K OLED HDR display, which means it's going to look crazy beautiful when you're video editing or even photo editing.

If you're looking for something different, check out our best Black Friday deals and best Cyber Monday deals hubs to see more hot products on sale.