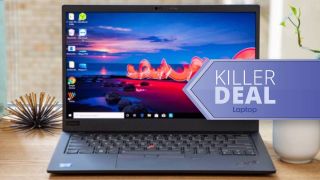 Memorial Day is approaching and Lenovo is wasting no time offering shoppers a sneak peek at early laptop deals. The PC manufacturer is holding a sitewide sale that takes up to 62% off select ThinkPad X1 Carbon business laptops.

It's one of the best laptop deals available this week.

Lenovo's ThinkPad X1 Carbon (8th Gen) packs specs that are on par with some of today's best laptops.

In our ThinkPad X1 Carbon review, we liked its lightweight and durable design, as well as its new PrivacyGuard display and keyboard layout.

The 8th Gen ThinkPad X1 Carbon is nearly identical to its predecessor. The laptop's lid has a carbon-fiber weave, which was introduced on select 7th Gen models. About the only difference is that Lenovo repositioned the X1 Carbon decal to just below the ThinkPad logo.

However, if you're looking for a laptop with 10th Gen Intel power, the Gen 8 ThinkPad X1 Carbon is a worthy successor.