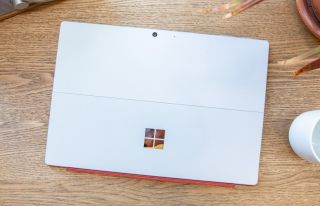 The Microsoft Surface Pro 8 is expected to arrive this year unless delays caused by the coronavirus push it beyond its annual release. As of now, there aren't many rumors circulating, but we expect the mill to start churning as we get closer to October when Microsoft typically releases new Surface products.

Last year brought us the Surface Pro 7, which delivered faster performance than its predecessors but at the cost of battery life. It's a good device -- and even one of the best tablets and 2-in-1 laptops -- but we expect to see improvements on all fronts, from the design to speeds and endurance.

Microsoft's Surface Pro tablets are popular among students and business users who travel frequently. They offer laptop-level performance in an ultraportable tablet form factor. When you need to get work done, just snap on the detachable (optional) keyboard and you're essentially working on a laptop.

Microsoft tinkered with its Surface Pro series last year by adding the Surface Pro X to the mix, but we weren't so thrilled about it. While it has the nicest design of any Surface tablet, performance and app compatibility issues weigh it down. The Surface Pro 8 feels like a critical product for Microsoft after the lackluster Surface Pro X and a Surface Pro 7 that proved to be a worse value than its predecessor.

We won't learn the official pricing and availability of the Surface Pro 8 for at least another few months, but historical data can get us in the ballpark.

Microsoft used to release new Surface Pro tablets every 1.5 years -- one in October, the successor in June of the next year, and so on. That cadence ended last year with the Surface Pro 7, which was released in October about a year after the Surface Pro 6.

We expect Microsoft to continue the trend, barring any further delays (possibly caused by the coronavirus). If we're right, the Surface Pro 8 will launch in early October of 2020. It's possible that supply chain delays lead to a June 2021 release.

We're also keeping an eye on the Surface Neo and Surface Duo, a pair of dual-screen devices originally set to launch Holiday 2020. The Surface Neo is reportedly delayed until 2021 but if it does arrive this year, Microsoft may choose to not overload us with new products.

We expect the Surface Pro 8 will land at around the same $749 starting price and go to or beyond $2,000 when maxed out. A lower starting price seems unlikely (unless Microsoft goes with AMD) and it'd take a serious overhaul and some futuristic features to get this tablet to cost much more than two grand.

We're still in the early days, but a pair of Microsoft patents are getting people excited about the Surface Pro 8. Before I go on, I should advise you that patents rarely turn into tangible products and the ones I'm about to describe are pretty far out there.

Still, it's fun to see what's going on in the minds of Microsoft's inventors on the off chance these bizarre ideas move ahead.

The first patent describes a Surface Pro tablet with solar panels embedded in the kickstand for extended battery life. One photo shows a Surface Pro with an attached keyboard being charged by four solar panels mounted to the back of its kickstand. Another method described in the patent would charge the Surface device directly.

You wouldn't even need direct sunlight, as the solar panels appear to work with artificial lights. Better yet, the kickstand can be rotated so the panels aim directly at the source of light.

Again, this is a pretty radical concept so the odds of it seeing the light (sorry, I had to) are slim. More likely is a concept described in another Microsoft patent wherein speakers are mounted to the back of the Type Cover.

Physical constraints limit the size of a tablet's speakers, but using the case is a clever way of adding more real estate to work with. As described in the patent, the case would work when open and closed and the speaker would face outward when the kickstand is engaged.

The Surface Pro 7 uses the latest Intel chips in the 10th Gen Ice Lake (10nm) processors. Next-gen "Tiger Lake" CPUs will supplant Ice Lake but Intel has yet to provide a release date for the 10nm chips.

Based on an Intel roadmap, Tiger Lake will arrive in late 2020 or early 2021, which means they may not arrive in time for the Surface Pro 8. Alternatively, Microsoft might choose to delay its launch for the next-gen CPUs, although it might not make sense to. Intel's own CFO George Davis said Tiger Lake (10nm+) will be "less productive" than 14nm chips, and that the 7nm processors in 2021 are the ones to look out for.

Regardless of whether the Surface Pro 8 will pack Ice Lake or Tiger Lake chips, we can expect to see Core i3, Core i5 and Core i7 variants of the CPUs.

We also need to talk about AMD. There aren't any rumors about AMD coming to Surface Pro, but Microsoft took a risk last year by relying on AMD processors for its Surface Laptop 3. We think Microsoft jumped the gun but that AMD's new 4000-series CPUs present a real opportunity for mobile devices like the Surface Pro 8.

Alongside the CPU, the Surface Pro 8 will likely start with 4GB of RAM and go up to 16GB. Storage on the Surface Pro 7 started at 128GB, but we'd like to see Microsoft take after Apple and ramp it up to a 256GB SSD. We'd be surprised if 1TB wasn't the maximum storage amount.

Surface Pro 8: What we want

Keyboard and Pen included: OK, so this isn't happening. I want to bring it up anyway because Microsoft markets the Surface Pro as a convertible but sells it as only a tablet. The Type Cover keyboard is what makes the Surface Pro such a compelling product.

Faster SSD: The Surface Pro 8's performance isn't entirely up to Microsoft. The company will use the latest Intel or AMD CPU and hope it goes the job. What is on Microsoft is using a fast SSD in the Surface Pro, something it has failed with in recent years. To add insult to injury, Microsoft charges an arm and a leg to expand the storage. For the Surface Pro 8, we want to see faster, cheaper storage options (they exist, trust us).