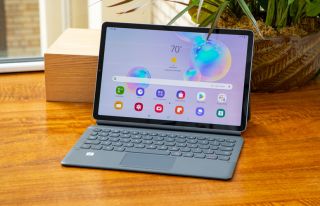 Samsung's Galaxy Tab S6 is the best Android tablet on the market by a country mile, but you might want to hold off on purchasing one.  Why not buy this excellent slate? Because Samsung is poised to unveil the Galaxy Tab S7 in the coming weeks, according to multiple rumors.

One of those rumors comes from the Romanian website Androidu.ro, which claims (with some help from Google Translate) that a 5G version of the Galaxy Tab S7 is already in the works.

Spotted as SM-T976B, this alleged Galaxy Tab S7+ 5G was supposedly confirmed by Samsung Germany in a support page, which was promptly removed. As is now standard with flagship smartphones, the Galaxy Tab S7 will supposedly have multiple models in different sizes, with the Tab S7+ being the largest version.

We don't know exactly when the Galaxy Tab S7 will be revealed but a genuine product page suggests it will be soon. If we had to venture a guess, August 5 seems like a pretty safe bet given the various rumors claiming there will be a big Samsung Galaxy Note event on that day. It's very possible that Samsung will unveil the Galaxy Tab S7 alongside its oversized smartphone.

The Galaxy Tab S7 and S7+ will supposedly arrive with 11-inch and 12.4-inch displays, respectively. That would make them direct competitors to the two iPad Pro models (11 inches and 12.9 inches).

You can expect the Galaxy Tab S7 to run DeX mode, Samsung's desktop operating system for mobile devices, and there should be a charging slot on the rear for the included S Pen. Unfortunately, the Galaxy Tab S7 will be throttled at a disappointing 15W charging speed, according to SamMobile, so let's hope for long battery life.

Looking for something cheaper? The Galaxy Tab S6 Lite is a great tablet for the price, although it has some limitations compared with the flagship Galaxy Tab S6.