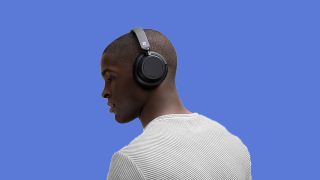 Microsoft has set the price of the Surface Headphones 2 and the Surface Earbuds at $249. It’s a smart move as it undercuts or matches two major opponents, the $399 Bose Noise Cancelling Headphones 700 and the $249 Sony WH-1000XM3 headphones.

It looks like Microsoft kept the design of the OG Surface Headphones intact for the sequel. The cans are still made from a soft-touch plastic material with aluminum extenders. There is one notable difference however, as the Surface Headphones 2 is now available in two colors: the light gray of the original cans and a new matte black hue.

Just like the first iteration of the headphones, both of the earcaps on the new pair have integrated touch panels and rotatable dials. All of which offer a series of intuitive controls for the wearer.

Similar to its predecessor, the Surface Headphones 2 has controls on both earcups. First, you have the embedded touch panels that allow you to swipe up or down to adjust the volume, and forward and back to skip tracks. You also have tap gestures. Tap once to play/pause, twice to answer calls/skip songs, three times to skip to a previous track and long press to activate digital assistant/decline call.

The earcaps also have rotatable dials that came in pretty handy on the original Surface Headphones. The right cup acts as your volume control while the left handles noise cancellation levels. The earcups have integrated sensors that pause music when you take the headphones off and resumes once you put them back on.

Microsoft has added a host of new brand-specific features. As a journalist,  I’m excited to take the dictation feature for a spin. It’s supposed to translate my speech to text in Microsoft Word or any other Microsoft 365 apps instead of typing them.

Fans of Powerpoint will probably enjoy the live captions and subtitles features; The Surface Headphones 2 can also translate over 60 languages with Windows 10. And if that wasn’t enough, the Play My Emails feature gives you the ability to listen to, delete and reply to emails on the go — as long as you have the Outlook mobile app.

The Surface Headphones 2’s other claim to fame is a feature carried over from the previous iteration –– adjustable active noise cancellation. Using the dial in the left earcup, you can adjust just how much of the outside world to let in. If you’re like me, the answer will be none. I’m hoping that Microsoft has found a way to improve the ANC as both Bose and Sony have stepped their games up. But only time and a thorough review will tell.

The Surface Headphones 2 will have 40-millimeter free-edge speaker drivers, just like the originals. That’s not a bad thing, as I like the audio quality of the original Surface Headphones. In practice, I found the originals gave a fairly balanced performance, although they were a little too forward on the bass on some songs. However, Microsoft claims its Omnisonic sound profile is tuned to deliver a warm, immersive sound that I’m eager to put to the test.

Microsoft estimates the Surface Headphones 2 will last 20 hours on a charge. That matches the Bose, but is far short of the Sony’s 30-hour mark. The headphones also have quick charge functionality that will give the cans nearly an hour of play time after just 5 minutes of charging.

Microsoft’s got something to prove with the Surface Headphones 2. The originals landed just short of greatness, but the new cans have plenty of promise to make up for the previous iteration’s shortcomings, especially with the Microsoft-centric features.

Given the competitive pricing, if Microsoft found a way to improve the ANC and tune the audio better, the company could have a bonafide monster on its hands. Either way, I can’t wait to get these onto my ears to find out.