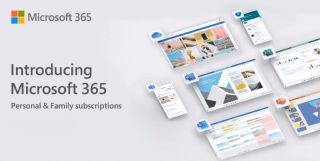 Update on April 21: The Microsoft 365 rebrand is now official.

Microsoft today flipped the switch on its rebranded and enhanced Office 365 service for consumers, known as Microsoft 365. Joining the enterprise version, the rebranded Microsoft 365 will cost the same, but a couple of new services have been added along with Office app features that are better suited for home and family use.

The rebrand is official today and existing Office 365 users are simply converted over to the newly renamed service, but some of the new features are still due to arrive later this year or are only partially available today. Here's a look at all of the updates and new services coming to the new Microsoft 365.

Cloud storage is another big piece of the subscription, which comes with 1TB of OneDrive storage for the personal plan and 6TB for families (although each user is limited to 1TB).

Microsoft Family Safety lets you share your location with family members and provides screen time monitoring and parental controls across Windows 10, Xbox, Android. A stripped-down version will be available on iOS.

If a family member shares their location, it can be tracked live and notifications can be set to trigger when they arrive at pre-determined locations. For young drivers, there is a driving report that will give parents feedback on how their child is doing on the road.

Microsoft Teams for consumers (officially it is also simply known as Microsoft Teams) brings the enterprise communication tool home as a hub for your family and friends. It has group chat features along with group video calling. You can also share files and photos, schedule events and more. Today, this version of Microsoft Teams is only available on Android and iOS, but wider support will come over the following months. Microsoft is targeting a wide variety of existing services with this update to Teams and we took a deeper look at what Microsoft Teams could mean for consumers.

Updates to the Office apps are also part of this rebrand, with new templates and other features being introduced to Word, Excel, PowerPoint, and Outlook.

Microsoft 365 will gain Word's popular Editor feature, which is basically a much more advanced proofing tool that gives you feedback on more than basic grammar and spelling. These are displayed in a Refinements section which includes categories like Clarity, Formality, Inclusiveness, and Punctuation, each of which helps to improve your writing.

Excel might be the biggest beneficiary of this update, adding a whole host of personal finance features that let you connect your bank and credit card accounts to make data tracking for your finances much easier. In addition, a variety of new data types are being added, like food, which allows you to review nutritional information in Excel.

PowerPoint picks up the Presenter coach, an A.I. that listens to you give a presentation and offers advice on how to improve your pacing along with feedback similar to what you will find in the Editor feature on Word.

Outlook picks up the option to link your work and personal calendars, which might not seem that significant, but, again, the central theme for the update is bringing Microsoft's tools home.

While the rebrand is official today, most of the features are going to be rolling out slowly over the coming months with full integration of all features not expected until this fall.