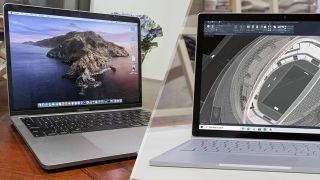 Microsoft has squarely targeted the Surface Book 3 at creative professionals, a group that traditionally opts for the MacBook Pro. Available in 13.5- and 15-inch models, Microsoft's 2-in-1 has the high-res display, long battery life, and high-end graphics performance that video editors, photographers, and animators crave.

Unlike the MacBook Pros, the Surface Book 3s also give you a detachable touch screen with support for the Microsoft Pen. And Microsoft has some higher-end components, including Intel 10th Gen Ice Lake processors and Nvidia GeForce 1650, 1660 Ti, or Quadro RTX 3000 GPUs.

To help you decide between a MacBook Pro and a Surface Book 3, we put the two devices through an eight-round face-off.

The Surface Book 3 looks nearly identical to its predecessor. We will weigh in on the new hinge in our full review soon, but the basic design remains the same with the visible gap when folded shut. While the larger MacBook Pro got the bump up to a 16-inch screen last year, that was the only real exterior change and the MacBook Pro 13 remains identical to its predecessor down to the dimensions and weight.

Surface Book 3 has a clear edge when it comes to versatility given its touchscreen as well as the ability to operate as a traditional laptop or a tablet. Notably, for the larger models the Surface Book 3 is now actually just slightly lighter than the MacBook Pro 16-inch (4.2 vs. 4.3 lbs), however, the MacBook Pro remains considerably slimmer at 0.6 vs. 0.9-inches.

The smaller models are another story with the MacBook Pro 13-inch weighing almost 0.3 pounds less than even the lighter i5 Surface Book 3 and over half a pound less than the i7 model.

Winner: MacBook Pro. Ingenuity and utility go to the Surface Book 3, but both in terms of the aesthetic design and for the superior portability of the 13-inch MacBook Pro the category as a whole goes to the MacBook Pro.

The port situation across both the Surface Book 3 and the MacBook Pro remains identical in this generation and unfortunately, for the Surface Book 3 that means we still don't have a Thunderbolt 3 port, the superior USB-C port that allows for higher-speed connections.

However, unless you have a specific need that Thunderbolt 3 addresses, the Surface Book 3 has the more useful assortment of ports for most people with two USB Type-A, the USB-C, an SD memory reader, and two Surface Connect ports. While the MacBook includes simply either two or four Thunderbolt 3 ports depending on your configuration. Both offer 3.5mm headphone jacks.

Winner: Surface Book 3. While the lack of Thunderbolt 3 remains a disappointment, the varied array of ports on the Surface Book 3 are simply more useful for most users.

The Surface Book 3 notebooks feature extremely high-res screens in both the 13.5-inch (3000 x 2000) and 15-inch (3240 x 2160) models. Naturally, the Surface Book 3 also offers 10 point multitouch and Microsoft Pen support. And it can operate as a standalone tablet when detached, which is pretty rad.

We need to run the Surface Book 3 and the new 13-inch MacBook Pro through our rigorous in-house display testing for the final results, so at present, this category is being determined by the above specs alone.

Winner: Surface Book 3. Higher resolution in both screen sizes along with the multitouch and stylus support make this category an easy win for Microsoft.

The keyboard is one area that was addressed by both the Surface Book 3 and the most recent MacBook Pros. It's a more notable change for the latter which was coming from the much-disliked and notoriously unreliable butterfly keyboard design of the last 5 years.

Now we are in the process of testing the Surface Book 3, so we can't give final judgment on the superior keyboard by touch just yet, but let's take a look at the specs for each.

The MacBook Pros both now feature the Magic Keyboard, which offers a much more forgiving 1mm of key travel and use the good old reliable scissor switches that shouldn't fail on you.

The Surface Book 3, on the other hand, has gone all the way to a 1.55mm key travel (up from 1.2mm on the Surface Book 2), which should make for an incredibly comfortable typing experience.

Winner: Surface Book 3. Despite the celebrated update to the MacBook Pro keyboard, it seems like Microsoft may have kept ahead of its competition on this one.

Microsoft continues to dominate the graphics performance side of things with the Surface Book 3, while the MacBook Pro is the unquestioned leader when it comes to CPU-intensive tasks.

We will take another look at this category once we have completed our full reviews and performance testing of the new Surface Book 3 models and the MacBook Pro 13-inch, but let's compare the specs to see who is likely to come out ahead.

On the graphics side, there is little question that the Surface Book 3 will again win this given its considerably more powerful GPU options. Particularly for the smaller models, the 13.5-inch Surface Book 3 has the option of an Nvidia GeForce 1650 Max-Q, which leaves the Intel Iris Plus of the 13-inch MacBook Pro in the dust. The 15-inch Surface Book 3 lacks the newest RTX Super options from Nvidia, but can include either the GeForce 1660 Ti Max-Q or Quadro RTX 3000 Max-Q.

With the larger models the MacBook Pro 16-inch really shines in the CPU department with 6- and 8-core 45w CPUs versus the quad-core 15w CPUs of the 15-inch Surface Book 3.

Winner: Draw. I'm calling this round a tossup until we have our official testing results. The 13.5-inch Surface Book 3 has a comparable CPU to the 13-inch MacBook Pro with the option to add a discrete GPU, but for the larger models, the MacBook Pro 16-inch has a significant CPU advantage over the Surface Book 3 15-inch that should make it the better performing option for most tasks.

While none of these laptops are slouches in the battery department, the Surface Book 3 has the definitive edge.

Winner: Surface Book 3. While we await confirmation from our own testing, based on Microsoft's claims and our experiences with both laptop lines in the past it is difficult to see the MacBook Pros coming out on top here.

Now considering either of these laptops as a value pick is difficult as both start in the premium tier and the higher-end configurations for both go well beyond $3,000.

MORE: Which MacBook Should You Buy? MacBook vs. Air vs. Pro

We will update the pricing for the 15-inch Surface Book 3 when available.

The Surface Book 3 might not be as pretty as the MacBook Pro, but it lasts longer, has an innovative detachable display with a much higher resolution, and offers more ports and stronger graphics options.

The MacBook Pro is a great PC, offers superior processor performance and it's still one of the best looking laptops around. For those considering the smaller models, it is also considerably more portable. The new keyboard is excellent and it is actually a more affordable option overall than the Surface Book 3.

MORE: The Best Laptops for Every Need

But the Surface Book 3 offers superior utility for a lot of users with its array of ports, detachable touchscreen, and impressive battery life. For fans of macOS the MacBook Pro is unquestionably still an excellent option though and worth a look for those that value portability or larger laptops fans that have tasks that will leverage the superior processors.