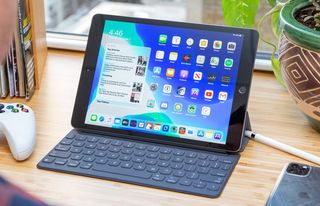 The iPad Pro is among the best tablets but its exorbitant price means most customers are better off finding an alternative.

The entry-level iPad, iPad mini and iPad Air are all reasonable choices, but only if you're willing to forgo the large displays offered on both iPad Pro models. Later this year, however, you might not need to make that compromise.

Reliable analyst Ming-Chi Kuo predicts that Apple will release a 10.8-inch tablet in the second half of 2020 followed by an 8.5-inch model at the start of 2021. The larger of these tablets could be the entry-level iPad, as MacRumors reports.

It would be a big jump from the current 10.2-inch display, especially since Apple just increased its size from 9.7 inches. Moving to 10.8 inches would make the display on the entry-level iPad almost as big as the one on the base iPad Pro (11 inches). It's also possible this 10.8-inch tablet is the next iPad Air (Gen 4), although previous rumors suggest its display will be at least 11 inches.

For those who prefer smaller tablets for their portability, the 8.5-inch model will supposedly be the iPad mini. The current model, which was released early last year, has a 7.9-inch display.

What this means for you

In general, I agree with the mindset that bigger means better, at least when it comes to screen size. I only hope Apple takes the time to redesign all three tablets in question -- the entry-level iPad, iPad Air and iPad mini -- before moving to a larger panel. It's time to kill the bezels and say one last goodbye to the physical Home button. If Apple can make those aesthetic changes, it should reduce the overall footprint of these slates.

I'm frequently asked by friends, family and readers which iPad they should buy, and the answer isn't always straightforward. The iPad Pro is the most capable but it's very expensive and few people would benefit from its powerful components.