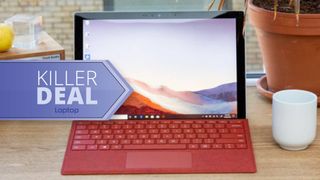 Microsoft's Surface Pro 7 is the best detachable tablet on the market and now it's cheaper than ever for this Cyber Monday laptop deal.

Best Buy is selling the Surface Pro 7 for just $599 with the black Type Cover keyboard after a $360 discount. That's the lowest price we've seen on the new tablet and matches Best Buy's Black Friday deal.

Microsoft Surface Pro 7: was $959 now $599 @ Best Buy
This Surface Pro 7 sports a 10th-gen Intel Core i3 CPU. It also comes bundled with Microsoft's Type Cover, so you can use it as a laptop or tablet. On sale for $599, it's at its lowest price ever.
View Deal

Surface Pro 7 (Core i5) w/ Type Cover: was $1,029 now $799
This could be the best PC deals on Cyber Monday, period. Not only is the new Surface Pro 7 heavily discounted but the deal (starting Nov. 22) even includes the super-comfortable Type Cover keyboard, a $129 value. View Deal

Surface Pro 7 (Core i5/8GB/256GB) w/ Type Cover: was $1,329 now $999
If you need more storage than what the previous deal offers, Microsoft is taking $330 off the 256GB model of the Surface Pro 7. Again, this epic deal includes the Type Cover keyboard, an accessory we strongly recommend. View Deal

In our Surface Pro 7 review, we liked its sleek metal design, stunning display and fast performance. And while battery life took a small hit with the new model, we still gave the Pro 7 our strong recommendation and a 4-star rating.

Microsoft's detachable tablets are very popular so we'd be surprised if Best Buy doesn't sell out. That's why you should jump on this deal soon.

If you're not sure which device to buy, check out our Which Surface is right for you? guide.