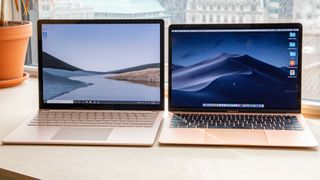 Apple vs. Microsoft. It's a feud as old as modern computing itself. Initially fought on the software front, the battle of these two giants is now a clash of metal against metal. Microsoft's newest weapon is the Surface Laptop 3, a traditional clamshell laptop with a superslim chassis. With a 13.5-inch screen, the Surface Laptop 3 makes for the perfect opponent against the MacBook Air, Apple's massively popular portable laptop.

On paper, the Surface Laptop 3 already has advantages over the MacBook Air. The Surface's U-series CPU should offer faster performance, and its USB Type-A port is still super useful. On the flip side, the MacBook Air weighs less and has a smaller chassis.

But which of these two flagship laptops — the Surface Laptop 3 or MacBook Air — is right for you? This is how they stack up.

These two laptops look very similar, but while the MacBook Air is slightly thinner, smaller and lighter, I prefer the aesthetics of the Surface Laptop 3.

The Surface Laptop 3 and MacBook Air have precision-cut metal chassis with a minimalist design. Iconic logos adorn their lids in reflective chrome, providing the only disruption from empty metal surfaces. Both laptops have gently rounded corners, while the Surface Laptop 3 has a sloped back side.

There are a few minor differences between the two designs. The MacBook Air sports front-firing speakers on each side of its keyboard, a fingerprint sensor built into the power button and slimmer display bezels than the Surface Laptop 3.

This round goes to the MacBook Air for its more practical and portable design, as much as I prefer the aesthetics of the Surface Laptop 3.

With only two Thunderbolt 3 ports and a headphone jack, the MacBook Air is begging you to connect a dongle.

If you're not about that life, go with the Surface Laptop 3, which offers a USB Type-C port, a USB 3.1 port, a headphone jack and the Surface Connect port.

The Surface Laptop 3 has a 13.5-inch, 2256 x 1540 touch screen with a 3:2 aspect ratio, which is slightly taller than the 13.3-inch, 1080p display on the MacBook Air. These laptops have bright and vivid screens, but the Surface's touch screen panel gives it a slight edge.

One screen didn't look more vivid than the other when I watched a trailer for No Time to Die. Daniel Craig's piercing blue eyes looked a saturated tone of aqua blue, and the lipstick worn by Ana de Armas was a deep scarlet. Details were also very sharp; I could see every scar webbing its way across the antagonist's masked face. When I looked closely, the MacBook Air's panel seemed to have better contrasts because black and gray hues were darker.

According to our colorimeter, the Surface Laptop 3 covers 121% of the sRGB color gamut, which makes it more colorful than the MacBook Air's screen (100%).

The screens on these two laptops are equally bright. In fact, the Surface Laptop 3's panel, at 348 nits, was just a few nits brighter than the MacBook Air's screen (343 nits).

This will be a closer contest once Apple does away with the Butterfly keyboard, but even then, the new scissor keyboard on the 16-inch MacBook Pro doesn't come close to the excellent one on the Surface Laptop 3.

I typed at 113 words per minute with an accuracy of 98% on the 10FastFingers.com typing test when using the Surface Laptop 3. That is a bit slower but much more accurate than the 116 wpm at an accuracy of 91% I scored on the MacBook Air.

Apple still makes the best trackpads, and the 4.6 x 3.1-inch surface on the MacBook Air is no exception. The oversized pad tracked my movements and gestures effortlessly. I'm just not a fan of Force Touch, the fake haptic feedback that only simulates an actual click.

The 4.5 x 3-inch touchpad on the Surface Laptop 3 is also excellent, and its soft-touch coating matches the snug feeling of the laptop's keys. I had no problems using it to execute Windows 10 gestures, like pinch-to-zoom and three-finger swipe to switch windows.

Apple really crippled the performance of the MacBook Air when it chose to use a Y-series CPU instead of a U-series chip like the one in the Surface Laptop 3.

That poor performance from the MacBook has real-world consequences. The Air needed 36 minutes and 6 seconds to convert a 4K video to 1080p resolution using the Handbrake app. The Surface Laptop 3 took about two-thirds of that time, finishing the task in 24 minutes and 55 seconds.

To Apple's credit, the company equips its laptops with some seriously fast hard drives. The MacBook Air's 256GB SSD raced to 1,011 megabytes per second using the Blackmagic disk app. Microsoft is only now catching on; the 256GB M.2 PCIe SSD in the Surface Laptop 3 copied 4.97GB of multimedia files in 9.4 seconds, for a rate of 541.4 MBps.

Expect good endurance from both of these laptops. The Surface Laptop 3 lasted for 9 hours and 17 minutes on our battery test, which involves continuous web surfing over Wi-Fi. It was a close call, but the MacBook Air powered down shortly before, after 8 hours and 51 minutes.

These are expensive laptops, and both Apple and Microsoft charge an annoying premium for upgrading components.

As the cheapest laptop running macOS, the MacBook Air is a popular choice among students and travelers. For those users, the laptop will do the trick. But if you're operating system agnostic, you'll prefer the Surface Laptop 3.