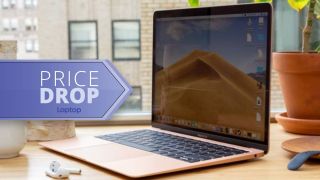 Great news if you're on the prowl for cheap MacBook deals. Apple's stylish laptop is back on sale at Amazon today.

The MacBook Air is an excellent all-around laptop for students and everyday use. It packs a 13.3-inch Retina display, Core i5 CPU, 8GB of RAM, and 128GB of storage.

In our Apple MacBook Air 2019 review, we liked its crisp, high-resolution Retina display and strong audio. While it only has two Thunderbolt 3 ports on board, we gave it an overall rating of 3.5 out of 5 stars.

In terms of the laptop's performance, the MacBook Air's CPU could use a bit more oomph. It has a Y-Series Intel Core i5-8210Y CPU which is suitable for light/everyday work, but power users might prefer more horsepower.

Connectivity-wise, the MacBook Air has two Thunderbolt 3 ports on its left side, one of which is for charging the notebook. It also has a built-in headphone jack so you can listen to music or podcasts using a wired pair of headphones.