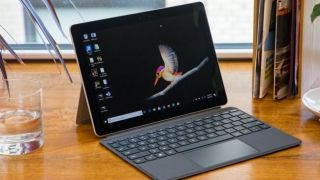 The Microsoft Surface Go 2, two years after the original Surface Go debut, is speculated to have a May launch date, SlashGear reported.

Rumored specs of the refreshed Surface Go 2 include minor changes to its internal components as well as unanticipated display improvements. As a plus, the Surface Go 2 will retain its budget-friendly price, which will make your wallet smile.

As we reported in February, the Surface Go 2 isn't going to blow anyone out of the water in terms of processor performance, which is no surprise due to its easy-on-the-wallet price tag.

There will be two CPU options from Intel's aging Amber Lake family: an Intel Pentium Gold 4425Y processor and a pricier Intel Core m3-8100Y processor. According to Neowin, there's a good chance that the latter will be restricted to the business version of the Surface Go 2.

Storage and RAM options for the second-generation are no different from its predecessor. You can opt for a 64GB eMMC or a 128GB SSD. For memory, you can snag either a 4GB or an 8GB option, SlashGear reported. Other rumored specs that are similar to the original Surface Go include microSD media storage expansion, a headphone jack, USB Type-C, Surface Connect and an IR camera for facial recognition.

The Surface Go 2's footprint will remain the same, but Microsoft might shrink the display's bezels. Slimmer bezels, which make for a sleek, unimposing frame around the display, is always a welcomed improvement. Thick bezels were one of our complaints when we tested our Surface Go review unit.

Despite some reports claiming the Surface Go 2 is "shockingly expensive" at $500, we are more inclined to believe the rumors that promise a low-cost starting price similar to the original Surface Go: $399.

The Surface Go 2 could live up to its name as Microsoft's most mobile tablet yet.

According to Windows Latest, the Redmond-based tech giant received an FCC certification for Wi-Fi 6. This could mean better battery life for the Surface Go 2 since Wi-Fi 6 is equipped with a mechanism called target wake time, which would enable the device to save power by sleeping in between Wi-Fi transmissions.

We're eager to get our hands on the Surface Go 2. In our review of the original Surface Go, we weren't too impressed with the device's battery longevity. May can't come fast enough as we impatiently wait to test this tablet in our own lab.