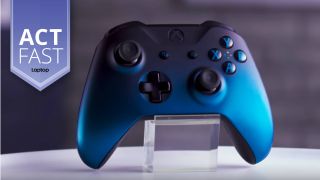 If you're looking for a new Xbox controller, gaming headset — or both, this next deal is for you. For a limited time, you can save up to $150 off Xbox and PC accessories at the Microsoft Store.

As part its Spring Savings sale, Microsoft offers the new Phantom Magenta Xbox wireless controller on sale for $59.99. Normally, this special edition Xbox controller retails for $69.99, so it's now $10 cheaper.

Of course, it's the lowest price we've ever seen for this newly released Xbox controller. It's one of the best laptop PC deals you can get right now.

HyperX Cloud Pro Gaming Headset: was $79 now $49 @ Microsoft
The HyperX Cloud Pro gaming headset packs 53mm drivers and enhanced bass, a closed-cup design and detachable noise-cancelling mic. It's now $30 off at Microsoft, which is the cheapest it's ever been. View Deal

The Microsoft Xbox One controller is one of the best PC controllers to buy. It has a comfortable, ergonomic design, textured grips, snappy buttons and four-way cross style D-pad.

Like the standard Xbox wireless controller, it connects to Windows PCs and laptops via Bluetooth. Just about the only difference is that its translucent design that fades to dark pink looks way cooler.

It's the best designed and most comfortable option for gaming across all genres. What's more, it helps improve gaming accuracy, control and comfort, even when your hands get sweaty.

Microsoft also has the badass LucidSound LS35X wireless gaming headset for $134.99 ($45 off) this week. Our sister site, Tom's Guide, reviewed this headset and praised its excellent surround sound, comfortable fit and smart controls.

Design-wise, the LS35X's big, cooling-gel infused-foam ear cups and a large, padded headband, make it easy to wear for hours at a time. It's also a great work from home essential for teleconferencing.

Microsoft's Spring Savings sale ends April 13 so we recommend you stock up PC gaming accessories while you still can.