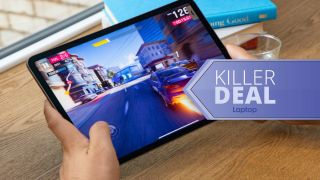 Apple's 11-inch iPad Pro is one of the best tablets you can buy. If you want a powerful slate that can moonlight as a laptop, this iPad deal at Amazon is just for you.

Amazon currently has the Apple 11-inch iPad Pro on sale for $949.99 . That's $199 off and the lowest price we've ever seen for this tablet. Best Buy offers the same price for this model iPad Pro.

In our iPad Pro 11-inch review, we liked its super bright display, 13-hour battery life and speedy A12X chip. It earned a 4 out of 5 star rating and the Editor's Choice award for its performance.

Add the optional Apple Smart Keyboard cover (sold separately) to the iPad Pro and it's capable of replacing your traditional laptop. The Smart Keyboard's biggest perk — and the feature that makes it one of the best iPad Pro keyboard cases — is how light and incredible easy it is to use.

The iPad Pro is a solid device for powerful productivity and entertainment on the run.