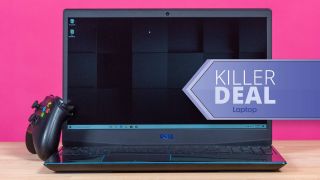 The Dell G3 15 is one of the best gaming laptops for the money. If you're looking for a cheap gaming laptop that doesn't skimp on performance, we've got an excellent deal for you.

This is one of the best laptop deals out there right now.

Dell's powerful Alienware laptops are popular among the gaming crowd. However, the G3 15 is no slouch.

In our Dell G3 15 review, we praised its strong overall performance and graphics. We were also impressed by its battery life, which lasts 6 hours and 41 minutes on our Laptop Mag Battery Test. Although we wish its screen were a tad brighter, we gave the G3 15 a 4 out of 5-star rating.

Performance-wise, the G3 15 did well in real-world testing. The laptop's Intel Core i5-9300H processor juggled 40 Google Chrome tabs and five 1080p YouTube videos without a hitch, even with Shadow of War running in the background.

The Dell G3 15 works with the Alienware Command Center app which is one of the best gaming utilities around. It lets you monitor the temperature and usage of the laptop's CPU, GPU, and RAM.

If you're looking for an affordable gaming laptop that delivers good performance, you can't go wrong with Dell G3 15.