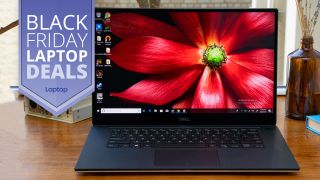 Black Friday is the best time to buy a laptop or any other tech for that matter. With Black Friday in full swing, laptop deals are live right now at various stores. And you don't have to step foot in a brick and mortar stores to snag the best deals of the season. Most of the best Black Friday deals in stores, you'll also find online.

Now that Thanksgiving is over, we're off to the races with Black Friday deals. Some of the best Black Friday laptop deals are coming from Amazon, Dell, Best Buy, Microsoft, and Walmart ahead of the actual retail holiday. But before you dive into the discounts, here's something to keep in mind. A new round of Trump tariffs will kick in potentially on December 15, affecting both laptop and tablet deals.

That's even more of a reason to take advantage of the best Black Friday laptop deals as prices could experience a steep 15% increase. And if you miss out on Black Friday, you should definitely take a look at our list of the best Cyber Monday deals.

Either way, it means we'll see some epic laptop deals in the coming days. That said, here's a look at the best Black Friday laptop deals available now.

Dell XPS 15 (Core i7, 1TB): was $2,099 now $1,599 at Dell
This is a huge discount on our favorite 15-inch laptop. The XPS 15 is a premium notebook with a gorgeous display, blistering quick performance and a portable chassis. View Deal

Lenovo Black Friday sale: Up to $1,000 off ThinkPad @ Lenovo
Lenovo is kicking off Black Friday in a big way. The PC manufacturer is slashing the price of its premium ThinkPad laptops. For instance, you can get the ThinkPad X1 Extreme w/ Core i7-8750H CPU, 16GB of RAM, 512GB SSD, and a GTX 1050 Ti for just $1,299 via coupon "THINKPEEK20".View Deal

Asus VivoBook 15: was $349 now $249 @ Walmart
The Asus VivoBook 15 is a solid multitasker armed with an AMD Ryzen 3 CPU with an AMD Vega GPU. To round things out, you get a FHD display with a 128GB SSD. And if you're worried about security, you even get a fingerprint scanner.View Deal

Asus TUF Gaming FX505GT: was $849 now $579 @ Best Buy
This laptop is TUF, but not expensive. The 15-inch Asus TUF Gaming laptop packs a Nvidia GTX 1650 GPU with a Core i5 processor, which makes it a solid mid-tier gaming laptop that's capable of more than it lets on. View Deal

MacBook Air 13" (2017): was $999 now $649 @ Amazon
Need an affordable MacBook? The 2017 MacBook Air is a solid machine with excellent battery life and a great keyboard. And you get both full-size USB ports and a memory card slot. View Deal

MacBook Air 13"(2019): was $999 now $799 @ Costco
The latest 13-inch MacBook Air is outfitted with a beautiful TrueTone display. Add to that an Intel Core i5 CPU, 8GB of RAM and a 256GB SSD. It's a great lightweight machine for students and professionals alike. View Deal

MacBook Pro (16-inch, 2019): was $2,399 now $2,189
With a larger display and a comfortable, more reliable keyboard, the 16-inch MacBook Pro is the Apple laptop we've been wanting for years. Incredibly fast performance, long battery life and power speakers are just the icings on the cake. View Deal

Samsung Chromebook 3 11.6": was $189 now $89
It doesn't get much cheaper than this. Best Buy is taking $100 off what is already one of the least expensive laptops on the market. This Chromebook is a great option for kids. View Deal

Acer Chromebook Spin 11: was $299 now $229 @ Walmart
As the name suggests, the Acer Spin is a convertible, which means it can transform from a traditional laptop to a tablet. In addition to its 11.6-inch screen, this Chromebook packs a Celeron N3350 CPU, 4GB of RAM, and 32GB of storage.View Deal

Acer Chromebook R11: was $299 now $258 @ Amazon
The Acer Chromebook R11 offers versatility and an estimated 10 hour battery life, making it ideal for school, work or play. This Celeron-powered convertible has 4GB of RAM and 32GB of storage.View Deal

Dell Chromebook 11 3000: was $355 now $219 @ Dell
This durable Chromebook can take whatever your kids can dish out, including drops and spills. And the specs are solid for the price, including a Celeron CPU, 4GB of RAM and 11.6-inch HD display.View Deal

Amazon Fire HD 10 Tablet: was $149 now $99 at Amazon
The best tablet Amazon has ever made is now on sale, just weeks after it was released. This latest device has a USB-C port, a fast quad-core CPU and extra-long battery life. View Deal

Amazon Fire HD 8 Tablet: was $79, now $49 at Amazon
Amazon's Fire HD 8 Tablet is one of the cheapest tablets you'll find around, which means it's perfect for your kids as a Christmas gift. It comes in red, blue, yellow and black. It also offers 16GB of storage. View Deal

What to avoid buying on Black Friday

Just about everything is on sale during Black Friday. However, you should approach every sale with a bit of caution.

For instance, we'd recommend bypassing any vague "doorbuster" or "early bird" specials you see on Black Friday. Sales that require you to get in line at 6pm on Thanksgiving Day are most likely available in very limited quantities.

Historically, we've found that "in-store-only" deals are typically available online. In some instances, they might even debut online before in-store. Our advice? Stay home, let that turkey digest, and shop from the comfort of your living room instead of a crowded store.