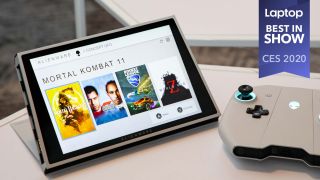 Super-slim frames, 5G connectivity and foldables, CES 2020 was packed full of goodies. We explored the massive convention center, visited every private suite and attended every press event to find the best the biggest tech event of the year has to offer. And the future looks very bright for portable computing, as Chromebooks get a lot more advanced, laptop screens fold in half and designs get more durable. Some of these machines have a very good chance of landing on our best laptop list once they are released.

We were particularly excited by one particular concept that should very much not remain a concept. So without further adieu, here is our list of the best laptops of CES.

While Dell came straight out of the gate stating the Concept UFO is in fact a concept, it is one of the more fully-realized products that we've seen at CES 2020. In its simplest form, the Concept UFO is a Windows 10 gaming tablet with detachable controllers. But big picture, the Concept UFO fills the current gap in PC gaming, which is being able to continue to game seamlessly on the go after you leave your gaming laptop or desktop. So in purpose alone, the Concept UFO is important, but its execution is what pushes it over the edge. It’s super comfortable to hold thanks to its ergonomic grips; the joysticks are reminiscent of an Xbox One Controller; and games ran pretty smooth on its vibrant 8-inch, 1920 x 1200 display. It basically makes the Nintendo Switch look like a toy. — Rami Tabari

Long live the king. It’s  not one sweeping change, but a host of incremental improvements that catapulted Dell to take the best laptop of CES 2020. First off, the XPS 13 is now virtually bezel-less, thanks to Dell’s InfinityEdge design. That means the company squeezed a 13.4-inch display into an 11-inch form factor. Plus, through some feat of engineering, the company managed to shrink the laptop’s dimensions, making it 2% smaller than its predecessor. Overall, the new Dell XPS 13 is an exercise in attention to detail, improving the notebook in a bunch of small ways that add up to a big leap for the system. — Sherri L. Smith

The ThinkPad X1 Fold is the world's first PC with a foldable display. Developed over four years, the ThinkPad X1 Fold has a polish you don't find in first-gen devices. Its refined design is made of a combination of leather, magnesium and silicon. Those materials come together in a package that is both beautiful and durable. Of course, the spotlight falls on the ThinkPad X1 Fold's flexible 13.3-inch, 2K OLED display that folds so that you can use it as two screens or expands to its full size for viewing content. When closed, the ThinkPad X1 Fold is about the size of a notebook, making it easier to carry around than a regular clamshell laptop. Lenovo is taking a risk by releasing the ThinkPad X1 Fold with Windows 10 Pro instead of the upcoming Windows 10 X that’s designed for foldables. But if there is any device capable of jumpstarting the foldable PC market, this is it. — Phillip Tracy

Samsung’s Galaxy Chromebook is in a class of its own. The premium laptop is the first Chromebook with an AMOLED display. It’s the world’s thinnest Chromebook, at 0.4 inches. And it’s the first Chromebook with Intel’s new 10th Gen processors. The Galaxy Chromebook's 13.3-inch, 4K AMOLED panel is mesmerizing. We stood mouths agape staring at its vivid colors and exceptionally detailed picture. Only the Galaxy Chromebook's razor-thin chassis with its fiery Fiesta Red finish could take our eyes off the panel. It gets even better because Samsung somehow fit a 10th Gen Intel U-series processor in the laptop's fanless design. The $999 Galaxy Chromebook is an important step forward for Samsung and Google. Not only does it prove that Samsung can be a force in a space where it has historically struggled, but also that Chrome OS can be a vehicle for hardware innovation. — Phillip Tracy

One of my favorite laptops, the HP Spectre x360, is back with a much needed upgrade. I’m not talking about its 10th Gen CPU or its latest Nvidia graphics, but I’m talking about its swanky haircut (aka its super slim bezels). Of course, the narrow bezels aren’t just important to make the screen look better, but it also makes the footprint smaller -- 13% smaller in fact. To top that off, HP has invested its time in developing a low wattage OLED panel to net some additional battery life out of this beast. For context, the previous HP Spectre x360 (15-inch, OLED) lasted 7 hours and 46 minutes on a charge, so if it’s able to get even an additional 30 minutes, that would be a welcome boost. By addressing the  only  two complaintsI had with the original, the Spectre x360 could be on its way to becoming one of the best laptops of 2020. — Rami Tabari

It’s barely been three months and HP has already improved on one of the best ultraportables on the market. The HP Elite Dragonfly for 2020 is still stunningly beautiful, but now its made with even more recyclable materials to the tune of 90% of the chassis. And the Dragonfly is the first notebook with Tile integration, so if your laptop goes missing, you can easily track it down, The best part? The Dragonfly is now 5G capable, so you’ll enjoy the fastest network speeds on the go. Add in 10th gen Core power and you have what looks like the ultimate business laptop. — Sherri L. Smith

MSI means business. After years of complaints about its gaming laptop’s battery life, the company has taken over-the-top measures and I love it. The company added a 99.9 watt-hour battery to the new MSI GS66 Stealth’s 0.8-inch all-aluminum chassis. In case you didn’t know, it’s the largest battery the TSA will allow. In addition, the company retooled the design slightly, with a black-on-black chassis and top-mounted speakers. Paired with Dynaudio’s software, it has the potential to be the best-sounding MSI ever. The anticipation is high for this sexy stunner. — Sherri L. Smith

Acer makes some of the best laptops under $500, but it has made strides in the premium laptop space, and now with the Acer Concept7 D Ezel, it has caught the eye of business users, gamers and content creators all in one swoop. If you’re a gamer, you can pack this baby with a Nvidia GeForce RTX 2080 GPU, 32GB of RAM and 2TB NVMe PCIe SSDs. If you double as a content creator, you’ll be graced by the Acer Concept7 D Ezel’s elegant design, which you can easily transform into a 2-in-1 by laying the display flat against the keyboard. Thanks to its included stylus that docks underneath the display, you’ll be ready to draw and create anywhere you go. Now, if you’re not into gaming but want to go hardcore on video editing or any other taxing task, you can get the Pro version, which gives you the  Quadro RTX 5000 GPU option for maximum productivity. Acer may have crafted one of the best workstations of 2020. — Rami Tabari

A team up between Lenovo and NEC, the Lavie Vega is a workstation that’s as beautiful as it is powerful. Outfitted with a 9th Gen Intel Core i7-9750H processor with 8GB of RAM, a 512GB Intel QLC 3D NAND SSD with a 32GB Intel Optane Memory and an integrated Intel UHD 630 GPU, there’s no doubt the Vega can get the job done. But really seals the deal with this laptop is its gorgeous blue alumite frame, topped with a pane of Gorilla Glass 6 on the lid. Not only does it look classy, it’s durable as hell. How do I know? I dropped a steel ball on it multiple times and couldn’t even make a dent. It’s a stunning combination of beauty and durability. — Sherri L. Smith

HP's Envy 32 All-in-One proves that form and function aren't mutually exclusive. The all-in-one desktop PC marries an elegant design with brawny components, in addition to all of the features it packs. There's plenty worth highlighting but we'll start with the Envy 32's 31.5-inch, 4K display, which is spacious, colorful and bright. Even when that gorgeous screen is turned off, the Envy 32's regal design will grab your attention. From the fabric-coated speaker grille to the wooden base, the Envy 32 is among the most stylish All-in-One PCs around. But don't let its looks fool you because there is some serious muscle hiding beneath the Envy 32's elegant skin; The All-in-One houses 10th Gen Intel H-series processors and up to an Nvidia GeForce RTX 2080 Max-Q GPU. And yet, despite everything it has going for it, the Envy 32's powerful and detailed six-speaker system is perhaps our favorite thing about the capable AiO. — Phillip Tracy