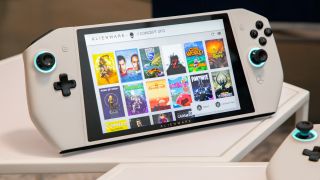 From the Razer Edge Pro and Nvidia Shield to the Nintendo Switch, there have been a number of mobile gaming devices over the years. But what if I told you that there was something new and better in every way, something you can play all of your PC games on the go? It’s not some knock-off, and it’s not some CES gimmick. The future is here -- it’s bright, colorful and thicc. At CES 2020, the gaming industry’s number one innovator, Alienware, is showing off its Concept UFO -- a Windows PC gaming tablet that you can take with you anywhere on the go.

We spoke with the folks at Dell and Alienware about Concept UFO and how it could change the future of PC gaming.

What is Concept UFO?

The Concept UFO is a Windows 10 gaming tablet two years in the making that seamlessly pair with two detachable controllers. The UFO sports an 8-inch, 1900 x 1200 display on a relatively slim tablet slathered in an iconic Alienware design.

It may look a little familiar to you, as it sports the same Legend design ID seen on the Alienware Area-51m, which uses the same elegant Lunar Light color scheme as the Concept UFO. It even has the same honeycomb design on the vents behind the kickstand.

The Concept UFO features a USB Type-C port and a headphone jack from what we could see, but the specs on the ports hasn’t been fully revealed.

But who is this device for?

“We see [the target audience] in two ways,” Dell Director of Advanced ID Drew Tosh said. “It's either an entry [product] because it's maybe baseline, [or] really it's more for the ultimate gamer who has probably a desktop set up at home, has a mobile unit as well, and is ready to have what I would call full mobile commute-type environment to game 100% of the time.”

The Concept UFO’s purpose is to fill in the gap that we currently have in PC gaming.

A (brief) history of mobile gaming

While the Concept UFO may seem like the first of its kind, there have been a few attempts at creating a mobile PC beyond a gaming laptop.

Way before my time as a tech journalist, Razer revealed one of its own concepts at CES 2012: Project Fiona, which later became Razer Edge at CES 2013. It was essentially a Windows 8 gaming tablet with controllers attached to it. We reviewed the Razer Edge Pro shortly after it came to market, and while it was impressive, it wasn’t the best.

Nvidia launched something similar, but not quite the same, called the Nvidia Shield, which was a straight-up controller with a 5-inch display attached to it. It would allow you to stream games from your PC to the controller, but only over local networks. Since it ran on Android, you could also play games on the Google Play Store.

The Acer Predator 8 attempted to do something similar with a full gaming tablet, but it wasn’t very successful because it was tied down by its Android library, which is similar to the Shield minus the PC streaming and an actual controller.

While Alienware isn’t the first to design a Windows-based gaming tablet, it is the first to not only attach a controller to it but also make it look like fully-realized product that can be relevant to consumers today, especially with the rise of handheld gaming hardware like the Nintendo Switch.

How the Concept UFO is different

There are comparisons to be made to the Razer Edge Pro, as the Concept UFO is running Windows 10 and is accompanied by a pair of controllers, but the advantage that the Concept UFO has, and what makes it different from the rest, is its ergonomics.

“We actually view [the UFO] as the first of its kind,” Dell Director of Engineering Kevin Turchin said. “When we look at the balance that we've achieved between performance and portability it does allow [us] to have a product that we view can be potentially viable in the market looking forward.”

“We worked on probably five or six different concepts [for the controllers] -- as you can imagine this electromechanical reality is very tough to solve,” Tosh said.

Kevin Turchin’s engineering team partnered with Tosh's design team on the Concept UFO, and a lot of effort went into how the controllers function, especially how they magnetically latch at an angle and "how the electromechanical aspect of that works to remain consistent jumping between [the UFO and the controllers].”

I loved the way the UFO felt in my hands. It wasn’t too heavy, and the controllers felt so natural to detach and reattach onto the system. I felt like I was on my Xbox playing how I normally do when I boosted and scored a goal in Rocket League. If I do have a complaint, it would be that I’d like the face buttons, the bumpers especially, to have more travel. However, it was surprisingly comfortable to hold and play with.

“We did a lot of work around what we feel is both ergonomically the right size for use as well as balancing that with the kind of engineering aspects of weight, and you know housing everything we need to house,” Tosh said. “I think we're very confident that the size we're at is where the concept should be in order to really be evaluated -- anything smaller we felt we would have to compromise on battery life or other things, and anything bigger simply becomes too heavy to hold for the aim that we have for the concept.”

Apart from my button issues, I think it’s the Concept UFO is way more ergonomically sound than the Nintendo Switch, which brings us to:

It’s hard not to talk about the UFO and immediately think of the Nintendo Switch, but it feels less like a carbon copy, and more of a necessary device -- something that needed to happen. The Nintendo Switch paved the way and exhibited that a device like this was possible and could be successful. Making a PC version similar to that was a logical next step, and Dell not only did that, but it improved upon it.

“I think the biggest difference is ergonomically we spent a lot of energy to really make sure we were hitting that Alienware-level class of ergonomics on the controls. The Switch controls are very generic and don't even have a decent rumble,” Tosh said.

Alienware wants to "set the bar of being the apex for handheld gaming," and they've done that by focusing on putting rumble motors in the controllers and ensuring that the Concept UFO is ergonomic enough to give you "confidence in [its] performance like an Xbox controller" and have the ability to hold the device for a comfortable period of time.

Ergonomics isn’t the only thing differentiates the Concept UFO from the Nintendo Switch. Of course, I am talking about gaming libraries. Sure, you can get exclusive games on the Nintendo Switch, like Super Mario Odyssey and The Legend of Zelda: Breath of the Wild, but you’re stuck with the Switch’s sloppy interface and limited to what’s in the Nintendo eShop. The Concept UFO, however, is a full-on Windows PC, so you have access to everything that you’d normally have on your home PC. From Steam and GoG to Epic Games Store and Origin, it’s all there at your fingertips.

If (hopefully when) the Concept UFO ever launches, you may be stuck between getting a UFO over a Nintendo Switch. So what’s the difference apart from games and ergonomics? It’s simple. Don’t think of the Concept UFO as just a PC version of the Switch -- It’s a full-on touchscreen Windows tablet, and thanks to its kickstand, you can set it up on a desk and draw on it, or connect a Bluetooth keyboard and mouse to use it like a regular PC.

And like the Switch, you can connect the Concept UFO to a monitor, slide the controllers off and connect them to an included controller dock to play in a comfortable position at home. You can also connect up to four controllers at one time to the UFO, so you don’t have to adventure alone when you have your friends and family over.

“Concept UFO is actually an extension of the gaming ecosystem,” Turchin said. “The inspiration behind Concept UFO was to take a similar gaming experience that we give our customers today on their desktop and notebook machines, but be able to give that experience potentially anywhere that they go. [...] All of the blood, sweat and tears and learning that you poured into [existing gaming libraries] -- you can now carry that experience anywhere.”

Unfortunately, we can’t get into specs as of yet, but it should be clear that the Concept UFO won’t be nearly as powerful as the best gaming laptops. However, it did run Rocket League, World War Z and Mortal Kombat 11 smoothly from what we could tell while testing it.

And an advantage that the Concept UFO has is that it’ll be easily set up with a software that will aggregate all of your games in one place. No, it’s not Alienware Command Center, but rather its own proprietary software. However, Dell is taking Alienware Command Center “under consideration,” so it’s possible we might see it in the future, if Concept UFO ever comes to market.

How much is the Concept UFO going to cost?

When you think of something like the Nintendo Switch, which costs around $300 right now, and then you look at the Concept UFO, you know that this is going to be more expensive in every way. If I had to make an educated guess, I’d say at least $600, but it really all comes down to the specs and if it’s going to be configurable. Obviously, we’re hoping it’ll be at a more approachable price point, like $400, but only time will tell.

When is the Concept UFO coming out?

“As far as productizing it goes, we're going in strictly as a concept and that's what we've got everybody committed to,” Watkins said. “We want to take it further, and how it's received at CES I think will help shape that conversation. [...] If we got a thumbs up today, I don't think it'd be eighteen months for us to get it on the shelves.”

Well, how do you feel about Concept UFO? Is this what you've been waiting for all your life? Then, slam Alienware and Dell’s Twitter, Facebook, Instagram -- all of the social media. Write them damn letters if you want to. Tell them you want this product, and it’ll come into existence. But, if you have a problem with it, tell them that too. Dell needs feedback. That's the whole point of showing the UFO as a concept at CES.

“You know, here at Dell, we can move mountains if we want to,” Turchin said. “We can go quite quick if that's something we decide to go do.”

The Concept UFO is the next step in the evolution of mobile gaming. Gaming laptops gave us the ability to take our games with us anywhere we wanted, but the Concept UFO allows you to actually play those games on the go, whether you’re sitting or standing.

The Nintendo Switch allowed us to play AAA titles on the go like never before, but the Concept UFO also gives us something different: the ability to continue on a more powerful desktop or laptop.