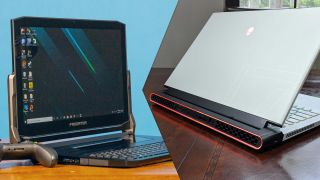 The latest version of the Alienware m17 is out, which means it's time for another face-off. This time, we’re pitting the Alienware m17 R3 against the Acer Predator Triton 900, two desktop replacement that specialize in serving up powerful performance. In one corner, you have the Alienware m17 R3, a surprisingly lightweight 17-inch laptop. But don’t let the scant weight fool you, this gaming laptop packs Intel’s new 10th Gen H-Series processor paired with Nvidia Super GPUs. Plus, you get a show-stopping 4K display and a comfortable customizable backlit keyboard.

Not to be outdone, the Acer Predator Triton 900 also brings the heat. It has one of Nvidia’s most powerful 20-series GPUs under the hood along with an Intel 9th Gen processor. Plus, Acer gave the notebook a seriously innovative design with a flippable 4K display. It’s both a showpiece and a powerhouse.

But in the battle of powerful gaming behemoths, there can only be one victor. So which will it be, Alienware or Acer? Let’s find out.

The Alienware m17 R3 is sporting the company’s Legend design. It’s an elegant take on the spaceship aesthetic that’s been the bedrock of the system’s design. Instead of a multitude of lights, you get a smooth magnesium alloy chassis colored in Lunar Light or Dark Side of the Moon. On the lid, there is a large glowing alien head with a geometric “17” decal printed on the lower-left corner. At the laptop’s rear, you’ll find a black vent that also holds several key ports.

The interior of the laptop reveals a rather large palm rest and keyboard deck. The touchpad is located directly beneath the keyboard. Just above that is a row of air intake vents shaped like small hexagons with a backlit alien head playing the part of the power button. A black bezel surrounds the display with the thicker bottom chin stamped “Alienware” in silver lettering. You’ll find the Tobii eye tracker directly below.

The Predator has always resembled a Decepticon to me and the Triton 900 continues the trend. What I really like about the aluminum chassis is that, unlike most gaming laptops on the market that sport a red and black motif, Predator’s have a dark gray and turquoise color scheme that’s really attractive.

But what makes the Triton 900 so different from everything else out there is the lid. It’s like Acer attached an exoskeleton of sorts to the lid, which allows the display to flip forward and lie against the top-end of the keyboard in a presentation mode. In my opinion, this is the optimal way to play games. You can also fold it flat against the keyboard and enter tablet mode.

Similar to other higher-end Predators, you’ll find a glass panel that shows off the fans. It’s cool (no pun intended), but it means that the keyboard is pushed into where the palm rest would usually be. As a result, the touchpad is shifted to the bottom-right corner.

The great thing about desktop replacements is that they typically have loads of ports to support just about any peripheral you can plug in. On the Predator, you’ll find a USB 3.1 Type-A port and a USB Type-C port, Thunderbolt 3, an Ethernet jack and a security lock slot. Along the left, you get another USB 3.1 Type-A port and separate jacks for a pair of headphones and a microphone. There’s also a USB 2.0 port that folds inward when it’s not in use. But wait, there’s more. Along the back, you get an HDMI 2.0 port, a DisplayPort and a power jack.

The m17 R3 is also chock full of ports. There are two USB 3.2 Gen 2 Type-A ports on the right with a microSD card slot and a wedge lock slot. There’s another USB 3.2 Type-A port on the left with an Ethernet port and a headset jack. The majority of the ports sit in the back where you’ll find a Thunderbolt 3 port, HDMI 2.0, a mini DisplayPort, the DC jack and a proprietary port for the Alienware Graphics Amplifier in case you want a power boost.

Welcome to the battle of the 4K panels. Both panels deliver sharp details thanks to their super-high resolution. And while the Predator’s flippable, adjustable panel is definitely cool, it’s surrounded by some rather chunky bezels where the Alienware has instituted seriously slim bezels with the exception of the bottom chin. It’s there where you’ll find a rather large Alienware logo below which a Tobii eye tracker unlocks a host of cool features, including controlling compatible games with just your eyes. But back to the panels.

The m17 R3’s panel has a 60Hz refresh rate, the Triton 900 has Nvidia G-Sync technology, which synchronizes the panel with the GPU for smoother rendering. That means playing games on both laptops should be incredibly smooth with little to no stuttering.

In terms of color reproduction capabilities, the Triton's touch panel is just a smidge brighter than the m17 R3, reaching 167% of the sRGB color gamut compared to 166%. However, the Alienware is the brighter of the two, averaging 591 nits compared  with the Triton’s 324 nits.

The Alienware m17 R3 is armed with an Nvidia GeForce RTX 2080 Super GPU with 8GB of VRAM. It’s essentially a step up from the Acer Predator Triton 900’s RTX 2080. Both laptops are capable of delivering seriously high frame rates as evident by our benchmarks.

For instance, we saw the m17 R3 notch 74 frames per second on the Shadow of the Tomb Raider test at 1080p on High while the Acer hit 79 fps. The laptops were tied at 28 fps when I changed the resolution to 4K.

Both laptops maxed-out the SteamVR Performance test with a score of 11, which means you have the all-clear to hook up a VR headset.

The Alienware took the lead right out of the gate, reaching 29,955 on the Geekbench 4.3 overall performance test. It easily beat the Acer’s 24,950. During the Handbrake video transcoding test, the m17 R3 transcoded a 4K video to 1080p in 7 minutes and 16 seconds, which is faster than the Predator’s 9:55.

The m17 R3’s dual SSDs duplicated 4.97GB of multimedia files in 5 seconds for a transfer rate of 1,082.8 megabytes per second. It’s much better than the Predator, which netted 848 MBps.

All those high-powered specs mean you're going to pay the piper somewhere. When it comes to gaming laptops, that payment is usually battery life. When we ran the Laptop Mag battery test, which consists of continuous web surfing over Wi-Fi at 150 nits of brightness, the Alienware only lasted 2 hours and 30 minutes. Still, that’s longer than the Predator’s time of 1:48.

Looks aside, the m17 R3 is seriously powerful thanks to its octa-core processor and Nvidia Super graphics card. From there, you throw in a 4K touchscreen and Tobii eye tracker that can be used for work (and more importantly) play. Is it expensive? Yes, but Alienware also offers cheaper entry-level options that don’t sacrifice too much power.

As for the Acer Predator Triton 900, it’s one of the most unique gaming laptops on the market. A gaming notebook with a convertible screen? You’re not going to see that everywhere. It opens up use cases you’d never consider with a gaming laptop, let alone a desktop replacement. It’s actually a solid choice for creative professionals who want the power of a gaming laptop but the large canvas of a tablet.

And while it doesn’t have the most up-to-date components, it still packs an impressive punch that shouldn’t be overlooked, particularly on the graphics front. But the price and the less than two hour battery life might be deal breakers for some.

Overall, the Alienware m17 R3 is the way to go for gamers looking for a powerful system with a host of unique features.