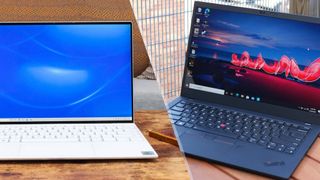 The Mayweather vs Pacquiao fight for the laptop world is set, and I promise this won't be a letdown. We recently published our reviews for the ThinkPad X1 Carbon (8th Gen) and XPS 13 (2020), two of the best laptops on the market. The two notebooks trade blow for blow in most areas with both having sleek designs, fast performance, great display options and long battery life. But there are some important differences between the ThinkPad X1 Carbon and the XPS 13 that should factor into your buying decision.

You can't go wrong with either laptop but if you need to choose between these two title champions, then read to find out which one to get.

Choosing a winner in this round is futile. Not only because aesthetics are subjective but because the XPS 13 and ThinkPad X1 Carbon are modern notebooks with common design elements. And they're both portable, but for different reasons.

The XPS 13, with its now completely bezel-free design, is incredibly compact with a footprint of 11.6 x 7.8 x 0.6 inches. The X1 Carbon also has relatively slim bezels but only on three sides. As such, it measures 12.7 x 8.5 x 0.6 inches. What makes the X1 Carbon arguably more comfortable to carry around is its lightweight materials. Weighing in at 2.4 pounds, the 14-inch X1 Carbon weighs less than the 13-inch XPS 13 (2.8 pounds).

These are two attractive laptops whose signature designs contrast in many ways. The ThinkPad X1 Carbon has an understated design with stealthy matte-black finishes and an optional carbon fiber weave pattern on the lid. Red accents on the pointing stick and left-and-right click buttons add a touch of color to the ink surfaces.

The XPS 13 is the most glamorous of the two notebooks, particularly the white version, which flaunts a Frost White lid and carbon-fiber weaved Alpine White deck. The aluminum lid gives the XPS a certain premium look and feel while the polished edges provide some visual bling.

While both of these laptops have excellent build quality, the ThinkPad X1 Carbon gets points for being tested to 12 military-grade durability tests, meaning it can survive harsh environments. The XPS 13 and ThinkPad X1 Carbon both have a fingerprint sensor and an IR camera for Windows Hello login.

We're going from nail-biter to blowout; the X1 Carbon has a better port selection of these laptops, and it's not even close.

While the XPS 13 has only two Thunderbolt 3 ports, a microSD card slot and a headphone jack, the X1 Carbon offers a buffet of inputs.

On the right side of the ThinkPad X1 Carbon are a USB 3.1 Type-A port and a lock slot. On the left side, you'll find two Thunderbolt 3 inputs, an Ethernet extension port, an HDMI 1.4, a headphone jack and a second USB 3.1 port.

This would have been a clean sweep if Lenovo hadn't removed the SD Card slot from the X1 Carbon last year. Now photographers and videographers need to use a USB-to-SD card dongle to upload images.

You can't go wrong choosing among the various display options on the XPS 13 or ThinkPad X1 Carbon. We reviewed the 1080p XPS 13 and both 1080p and 4K versions of the ThinkPad X1 Carbon. Across these screens, we saw sharp details, vivid colors and impressive brightness.

We saw similar results in our brightness test. The 1080p X1 Carbon hit 364 nits of brightness whereas the XPS 13 reached 417 nits. The 4K panel on the X1 Carbon outshone both laptops, at 498 nits. Since we can't compare 4K-to-4K we're going to give Dell the win in this round for having the better 1080p option.

The XPS 13 has a decent keyboard, but it doesn't compare with the class-leading one on the ThinkPad X1 Carbon.

The Carbon's backlit keys offer deeper travel than those on the XPS 13 and they deliver a really satisfying tactile click. There is a meatiness to them that is missing on the XPS 13's keys. On a positive note for Dell fans, the XPS 13 has 9% larger keycaps that are well-spaced and comfortable to type on.

At 4.4 x 2.6 inches, the touchpad on the XPS 13 is actually a tad larger than the one on the ThinkPad X1 Carbon (3.9 x 2.2 inches). Both glass surfaces are responsive and didn't have any problems executing Windows 10 gestures.

A bonus for some people is the TrackPoint pointing stick centered on the ThinkPad X1 Carbon. An alternative to the touchpad, the little rubber nub lets you control your cursor without taking your hands on the keyboard.

If we're considering pricing, the XPS 13 with an Intel Core i7-1065G7 CPU and 16GB of RAM is a direct competitor to the X1 Carbon with an Intel Core i5-10310U vPro with 8GB of RAM, not the even pricier Core i7 vPro, 16GB of RAM model we also tested. I'll include scores from all three laptops, but keep that in mind as you go through this section.

The X1 Carbon gained some ground on our hard drive test. The 256GB PCIe SSD in our cheaper model duplicated 5GB of multimedia files in 6 seconds for a transfer rate of 783 megabytes per second, and the 512GB SSD config did it in 5 seconds for a rate of 997.9 MBps. It took the XPS 13 8.3 seconds to complete the task, which comes out to a rate of 613.1 MBps.

But the pendulum swings back in Dell's favor when you look at graphics performance. The X1 Carbon has Comet Lake chips so it relies on integrated Intel UHD graphics, which are weaker than the Iris Plus graphics in the XPS 13's Ice Lake CPUs.

This became apparent when we tried playing Dirt 3 on these ultraslim laptops. We had no problems drifting around tight turns at 59 fps on the XPS 13. In comparison, the Core i5 and Core i7 ThinkPad X1 Carbon ran the racing game at only 30 fps and 33 fps, respectively.

The XPS 13 lasts longer on a charge than the ThinkPad X1 Carbon and the difference is pretty significant. The Dell lasted for 12 hours and 39 minutes on our battery test, which involves continuous web surfing over Wi-Fi at 150 nits.

With a respectable runtime of 10 hours and 45 minutes, the 1080p X1 Carbon will power down a few hours before the XPS 13. The 4K version lasts for 7 hours and 23 minutes, which is OK given the UHD panel.

Dell wins this championship matchup in a photo finish. In the end, the difference came down to pricing; as a business notebook, the X1 Carbon demands a hefty premium and costs a few hundred dollars more than the XPS 13 across the board. If money isn't an issue, then deciding between these two gets tricky.

The XPS 13 has better performance and longer battery life, but buying the Dell means you'll forgo the world-class ThinkPad keyboard and generous port selection on the ThinkPad X1 Carbon. I want to reiterate: you can't go wrong with either notebook. They both have striking, ultraportable design and excellent display options, among a wide range of features they both deliver.

If I had to choose between them, I'd buy the ThinkPad X1 Carbon, despite what the above numbers say. I could use the extra screen real estate and the laptop feels considerably lighter than the XPS 13, even though the weight difference between these isn't massive. I also value USB Type-A ports more than most people. Having said that, the XPS 13 might be a better choice if you need a compact machine with extended endurance, or if the lofty price of the ThinkPad turns you off.