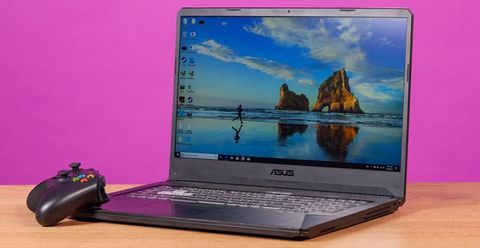 The Asus TUF Gaming FX705 (starting at $999, reviewed at $1,299) is a midlevel gaming laptop that offers excellent overall performance at a reasonable price. While it doesn't pack one of Nvidia's newer, more powerful RTX graphics cards, the 17.3-inch TUF Gaming FX705's GeForce GTX 1060 GPU with 6GB of VRAM can run modern games at medium-to-high settings. The laptop also has a comfortable keyboard and a vivid, 144-Hz IPS display. A large, hefty chassis and weak speakers are unfortunate shortcomings, but the FX705 is still a great value –– so much so that it's landed on our top cheap gaming laptops under $1,000 page.

You can purchase the TUF Gaming FX705 from online retailers like Amazon and Best Buy or directly from Asus.

You can breathe a sigh of relief. Asus did away with the ugly red lighting bolts that sparked from the corners of last year's TUF Gaming FX504. In their absence, indents that streak from each corner to the center of the lid are the only bit of flair on the lid. The stylized X design makes the FX705 look as if it could be used as a stand-in shield for Captain America.

A chrome Asus logo adorns the lid's smooth, gray metal surface. Adding a bit of flair to the understated exterior is a cutout through which you can see LED indicators.

Opening the laptop reveals a black plastic deck with a TUF Gaming logo on the bottom-right corner. A horizontal brushed texture coats the center of the deck, while a vertical pattern clashes on the outer edges. Sharp contours around the keyboard and near the fan vents try hard to give the FX705 an aggressive "gamer" look.

Also on the deck are a TUF Gaming logo and a parallelogram-shaped power button. I'm not fond of how many textures there are on this laptop, from the excessively brushed plastics on the deck to the honeycomb pattern on the rear of the laptop and the stippled finish on the FRX705's thin bezels.

While they'll bemoan the absence of a USB Type-C port, gamers will benefit from the FX705's Ethernet port and HDMI input.

The screen was so sharp that I could make out the stitching in Dakota Fanning's shirt when I watched a trailer for the upcoming film Teen Spirit. A cascade of bright colors shone on the display when the pop singer took the stage. The FX705's display produced a range of colors, from Fanning's mustard-yellow waitress uniform to the rich, neon-pink tones illuminating the wall behind her.

I felt a strong urge to take a dip in the gorgeous turquoise-blue water that the display brilliantly rendered as my character navigated across a detailed jungle in Shadow of the Tomb Raider. With graphics set to Ultra, the flora and fauna in the treacherous Peruvian jungle looked almost lifelike. Plants were a deep, bold green and I could make out individual tree leaves hanging high above me.

MORE: The Laptops with the Brightest Displays: Guide

Typing on the FX705's bouncy keyboard was a real pleasure. I never bottomed out when I tapped away at the FX705's RGB backlit keys, thanks to their 1.7 millimeters of travel (above our recommended minimum of 1.5 mm). I also appreciated the solid, weighty feedback they provided each time I applied the 62 grams of force required to actuate a key. Also, the keys are large and well-spaced, even with a full number pad taking up the right side of the deck.

Asus used clear keycaps for the WASD keys, so they're more distinguishable when you're tracking down enemies in first-person shooters. The keyboard is RGB-backlit and you can use the Aura Core software to adjust the colors and switch between basic effects, like breathing and strobing.

I typed at a rapid 122 words per minute with an accuracy rate of 94 percent on the 10FastFingers.com typing test. That is quicker but less accurate than my typical 119 wpm with a 5-percent error rate.

The 4.1 x 2.8-inch touchpad under the keyboard is fast and responsive. I executed Windows 10 gestures -- like three-finger swipes to change windows and pinch-to-zoom -- with little effort. Small, gray arrow ticks in each corner of the touchpad add to the FX705's aesthetic. My only complaint with the touchpad is that it produced a loud knocking sound when I tapped down on it, as if it were loose.

The FX705's dual, side-firing speakers are disappointing. The FX705 was barely able to fill a small lab space after I maxed out the volume. When I listened to Glass Animals' "Youth," the low end was notably lacking. The deep rumble I was anticipating during the chorus of this experimental track sounded thin and splashy. To the speakers' credit, complex electric sounds produced by a synthesizer were nicely separated from the guitar and strum sounds generated by traditional instruments. However, when I switched to Flora Cash's "You're Somebody Else," Cole Randall's delicate vocals sounded clear but distant, and I strained to hear details in the song when I listened at 50-percent volume.

Shadow of the Tomb Raider's immaculate sound design was let down by these quiet speakers. While I could hear the rustling of plants as Lara Croft's cargo pants brushed by them, I could only do so with the volume at 80 percent or higher. On a positive note, high-frequency sounds were clear and airy, allowing me to hear birds chirping overhead and the whooshing of an arrow as it whizzed through the air.

A DTS audio app installed on the FX705 lets you adjust the sound profile of its speakers. There is a full equalizer along with several preset modes, some of which worked better than others. Bass Boost, for example, didn't do anything to improve the low end, while the 3D mode separated sounds and made music louder, although at the expense of clarity. I suggest keeping Volume Leveling on, since it seemed to increase output without sacrificing quality.

RTX cards are all the rage these days, but the good old-fashioned GTX 1060 inside the TUF Gaming FX705 still packs a punch. I swung from one tree branch to the next in Rise of the Tomb Raider (1920 x 1080, High settings) while averaging a smooth 58 frames per second. The RX705 didn't drop a frame as I scavenged the dense jungle floor searching for ammo and supplies.

On our Rise of the Tomb Raider test, the FX705 maintained 36 fps, surpassing our 30-fps playability threshold. Equipped with the same GeForce GTX 1060 GPU, the Gaming Laptop 17+ (37 fps) and Legion Y7000 (37 fps) offered similar performance, while the GTX 1070 Max-Q-equipped Omen 15 (50 fps) topped its rivals. Each of the laptops did better than the mainstream gaming average (35 fps).

When you aren't playing demanding games or running other graphics-intensive programs, the FX705 switches to an integrated Intel UHD Graphics 630 GPU to conserve power.

Packing a Core i7-8750H CPU and a whopping 32GB of RAM, our TUG Gaming RX705 review unit handled everything I threw at it. The laptop didn't stutter once during everyday use, even after I loaded 20 Google Chrome tabs, four of which played 1080p videos -- two on YouTube and another pair streaming Apex Legends on Twitch. But I was blown away when I remembered that Shadow of the Tomb Raider was downloading on Steam the entire time I had been browsing the web.

MORE: How to Stream to Twitch

The FX705 stayed cool under a heavy workload. After we streamed a 15-minute HD video in full screen, the touchpad warmed to 82 degrees Fahrenheit. The center of the keyboard hit 92 degrees and the underside topped out at 89 degrees, both of which are below our 95-degree comfort threshold. The bottom, near the left corner, was the hottest location at 95 degrees.

The dual fans on the underside of the Gaming FX705 did a reasonable job keeping the laptop's large chassis from overheating after I played Shadow of the Tomb Raider on Ultra for 15 minutes. The touchpad warmed to only 80 degrees, while the bottom panel topped out at 94 degrees. The bottom-right corner of the chassis and the keyboard rose to 118 degrees and 104 degrees, respectively. While that's toastier than I would have liked, we've seen much higher readings from comparable gaming laptops.

You'll need to buy an external webcam if you intend to stream gaming sessions. The 720p webcam above the FX705's display produced a dark, blotchy image when I snapped a selfie in our dimly lit office. My face was so blurry that it looked as if the webcam had been smudged. Sadly, wiping it with my fleece cuffs didn't make the picture any better.

The camera was able to capture the light and dark shades of blue in my jacket, although the overall image was dark, and it appeared as if there were an orange filter over the lens.

You probably won't ever use the apps Asus preinstalled on the GX705. Those extraneous programs include Asus Giftbox, which is simply a portal that recommends apps and gives you special offers in the Windows Store. Asus Keyboard Hotkeys appears in the FX705's list of apps, but its single purpose is to enable shortcut hot keys in the background.

The Asus Power Scheme app is also pretty bare-bones, and the Installation Wizard is only meant to help you install even more Asus apps. The one genuinely useful program already loaded on the Gaming FX705 is MyAsus, which gives you access to support, system diagnostics and software updates.

The TUF Gaming FX705 ships with a one-year warranty. See how Asus did in our Tech Support Showdown, Best and Worst Brands and Best and Worst Gaming Brands reports.

The TUF Gaming FX705 is a good choice for anyone who wants a large, midrange gaming laptop. The FX705's 17.3-inch, 144-Hz display is vivid and detailed, and its Core i7 CPU and GTX 1060 GPU provide excellent all-around performance.

While the FX705 lacks any standout features, it also has few shortcomings. The FX705's weak speakers are a bummer, though, and you'll probably need to spend more for a better webcam. However, neither of those are deal breakers, especially when you factor in the FX705's competitive price.

If you don't mind scaling down to a 15.6-inch display, then we recommend the Dell G7 15, a sub-$1,000 gaming laptop that offers strong overall performance and good battery life. That said, its dim display and poor keyboard are hard to overlook. Alternatively, the HP Omen 17 is another excellent 17-inch laptop with great performance and a beautiful display, but this GTX 1070-equipped laptop costs a bit more than the FX705.

Overall, the TUF Gaming FX705 is a very good midtier gaming laptop that offers strong performance and a vivid display at a relatively low price.

Less
Be In the Know