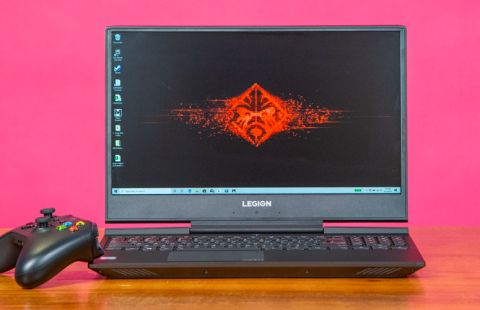 The Lenovo Legion Y545 offers strong gaming and overall performance with understated, business-ready looks — all for an affordable price.

The Lenovo Legion Y545 ($799 starting, $999 as reviewed) is like getting a luxury vehicle for the econobox price. Its muted styling made me feel like an undercover gamer. One minute I'm producing spreadsheets, PowerPoint documents and reports, and the next I'm on a mission in Hitman 2 while sitting on a park bench during my lunch break. It's the covert gamer's laptop du jour. You may even hear spy music in the background as you tote it around, knowing that at any moment it's game on!

The base model costs $799 but drops you down to 8GB of RAM, and an entry-level GeForce GTX 1650 GPU with 4GB of video memory. However, you do get more storage with a 256GB PCIe SSD. Both models are solid but our review unit gives the user more bang for the buck.

With its industrial design accentuated by clean, attractive lines, the Lenovo Legion Y545 presents a nice contrast to many of its flashier counterparts. Its understated styling coupled with tastefully aggressive venting on the rear and bottom make it unique. Its dark iron-gray aluminum lid has a similar appeal to an entry-level Mercedes-Benz or BMW. The white backlit Y emblem is distinctive and gives it a respectable amount of flair.

Opening the lid reveals more of that understated dark-gray aluminum. The island-style keyboard sits toward the top of the deck, its triangular power button above the F8 key daring you to engage. The large touchpad beneath the keyboard sitting dead center in the palm rest finishes the presentation.

The Legion Y545 has enough ports to transform into a passable workstation. On the right side there’s a USB 3.1 Type-A port and a combination headphone/microphone jack. On the left side, is another USB 3.1 Type A port.

Need more ports? Check around back and you’ll find a virtual smorgasbord. From left to right you will find a USB 3.1 Type-C port, a mini-DisplayPort, another USB Type- A 3.1 port, an HDMI, and an Ethernet jack, followed by the DC-in port and a Kensington lock.

When I first saw the Legion Y545’s 15.6-inch, 1920 x 1080 anti-glare panel, I wanted to go somewhere quiet, ignore my family and play games like my life depended on it. When I watched the trailer for the Fast and Furious, I found the colors so vivid, the explosions and high-speed chases so clear and beautiful, that by the end I wished I had Vin’s muscles, because they looked fantastic on this panel.

A few hours later and I’m still loving this display. When I watched [TK] And while 60hz isn’t as fast as pricier gaming rigs, the Y545’s refresh rate ensured buttery-smooth rendering when I played Grand Theft Auto 5. Everything looked sharp; the colors were perfectly saturated, bright and scintillating. As I drove around I kept making U-turns, just to enjoy all the excellent detail and run over a few folks. Even details in the distance appeared accurate, and as I got closer the sharpness came together nicely.

Whoa, is this laptop bright! The Y545’s panel averaged 300 nits of brightness, beating the 284-nit average. Although none of the competitors could hold the proverbial candle to the Lenovo, the Dell came closest at 272 nits. The Asus reached 240 nits, while the HP delivered a dismal 176 nits.

Laptop speakers often disappoint, but this was definitely not one of those times. The Dolby Atmos software combined with a pair of Harman/Kardon-tuned speakers give the Legion Y545 its excellent sound quality. The notebook’s volume is loud enough to fill my 200-square- foot living room, and there is a good amount of bass to provide depth to the sound.

As a longtime audiophile, I had to hear the funky horns of Earth, Wind and Fire, and hear them clearly. As they performed "September"the horns came in warm and rich. Maurice White’s velvety-smooth vocals were nice and full, and Phillip Bailey’s falsetto was clean and clear.

I felt completely immersed while playing Grand Theft Auto 5. With the realistic tire- screeching and stuccatto gunfire, my gaming experience was taken to another level. I was very impressed with the fullness of the audio each and every time I crashed into something. Often, it felt wonderfully surreal.

The sound quality is so clear and impressive while using this laptop that I didn’t feel the need to use headphones or connect to a Bluetooth speaker. I did make time to play with the Dolby Atmos software, turning on the Sound Radar, which enables the Dolby engine to simulate spatial sounds within the gameplay environment, and it just added buttery goodness. It truly took the audio experience to another level with sounds coming from all directions. I could clearly hear another vehicle pull up on my right or left. This added dimension makes game play truly palpable.

As a person with fairly large hands, I really enjoyed the full-size, island-style keyboard. With a full numeric keypad and white backlighting, as well as a dedicated recording key for gamers who want to capture their best gaming moments, this keyboard is truly made for gamers. I fared better than expected on the 10fastfingers typing test, scoring 90 words per minute with 96% accuracy.  Honestly, I think the keyboard is responsible for that. It almost felt like cheating, with such firm feedback and deep travel. So thanks, Lenovo, and take that Sister Mary Ellen! She said I would never get past 20 wpm!

Made of matte black Mylar, the 4.1 x 2.7-inch touchpad is smooth to the touch. Windows 10 gestures were very precise, even while using three-or four-fingered gestures and simple finger taps. The bottom corners of the touchpad are  highly responsive and give an excellent click when pressed.

I then moved on to one of my all-time favorites, Hitman 2, because there’s nothing like a good old-fashioned assassination to help one relax. Testing Hitman at 1920 x 1080 on Ultra with DirectX 12, the Legion Y545 produced 95 fps, blowing past the 85-fps category average as well as the Zephyrus, which scored 73 fps. The G3 15 and the Pavillion obtained 62 and 57 fps, respectively.

The Lenovo further flexed its gaming muscle during Far Cry New Dawn, coming in at 79 fps. It’s enough to surpass the 65-fps average as well as the Pavillion, the Dell and the Asus, which were within a frame of each other at 54, 53 and 52 fps, respectively.

Get ready to play some Star Wars: Vadar Immortal because the Lenovo Legion Y545 does virtual reality surprisingly well for a mid-tier system. During the SteamVR Performance Test, the Lenovo hit 8.6, which is short of the 9.1 average. That’s still better than both the HP and the Dell, which reached 5.9 and 5.8, respectively. The Asus knocked it out the park with 9.2, while the HP hit 5.8, once again beating its competitors.

The Lenovo Y545 reminds me of my first car. Stylish enough to turn heads, but powerful enough to make me feel like a badass.

With a 2.6-GHz Intel 9th Gen Core i7-9750H processor and 16GB of RAM, the laptop never struggled for a  minute. It even handled resource-draining Google Chrome while running 25 tabs, including one playing Avengers End Game on Disney Plus, with no hiccups.

I downloaded DaVinci Resolve 16 to test how the Y545 would edit and render video. The Legion Y545 held its own but didn’t render HD video as quickly as my desktop, which has a desktop processor and 32GB of RAM. However, if I were shooting video and needed to do some quick edits, it would more than suffice. I would definitely take it on location with me when I’m shooting photos or videos.

Gaming laptops are typically anathema to battery life.The Legion Y545 which consists of continuous web surfing over Wi-Fi at 150 nits of brightness, lasted only 3:38. That time is still a bit short of the 4:06 mainstream gaming average. Both the Zephyrus and the Pavilion lasted longer with times of 4:48 and 5:06, respectively. But the G3 15 proved it has staying power, clocking in at 6:41.

The Legion Y545 uses Cold Front cooling technology, a dual-channel cooling system that cools the CPU and GPU simultaneously with dedicated fans and heat sinks. Although the rear and bottom vents are well-placed and flow well with the laptops aesthetic, I found the system ran hot after 20 minutes or so while multitasking, running video or gaming. There were times when the fans were loud, but its fan noise is comparable to other laptops in the same price range with similar specs. Sometimes the fans got louder in short bursts, while other times they quietly kept the system cool.

I spent 15 minutes exploring ancient Greece in Assassin’s Creed: Odyssey and then measured strategic points along the laptop. The touchpad measured 94 degrees Fahrenheit, which is just above our 95-degree comfort threshold. The center of the keyboard and the laptop’s undercarriage hit a rather warm 109 degrees.

After 15 minutes of streaming a full-screen 1080p video, the Legion Y545 measured 101 degrees Fahrenheit at the bottom, which is slightly above our 95-degree comfort threshold. The touchpad and middle of the keyboard registered 81 and 90 degrees, respectively.

The 720p, 1.0 megapixel webcam is not the best. It’s oddly positioned at the bottom of the bezel, which makes for unfortunate shots. Yes, I did take an accidental photo of my belly button (nobody wants to see that). The quality of the video and photo is poor, and if you’re going to be streaming, it’s best to purchase a Full-HD external webcam. Also, in 2020 having less than a Full-HD cam on a laptop just makes it feel antiquated.

Lenovo’s Vantage software comes standard on the Legion Y545, and I suggest playing with it to tweak settings and performance to your liking. The UI is very user-friendly and provides access to system components and system-optimization tools such as Legion Edge, which gives you access to Network Boost, Auto Close, Hybrid Mode, touchpad lock, quick settings and system updates.

As is normal with Windows 10 systems, there's a normal amount of bloatware, including Skype, Netflix, Microsoft Solitaire collection and Farm Heroes Saga.

At the end of the day, the Lenovo Legion Y545 is an entry-level gaming laptop that under promises and over-delivers. Priced at $999, the laptop’s discrete Nvidia graphics chip serves up a surprising amount of power, with above-average results. And when you’re not gaming, the laptop’s Core i7 processor is more than capable of allowing you to create spreadsheets, do some light video-editing and, of course, watch some movies on that beautiful 1080p display.

However, if you want something with longer battery life and comparable performance, you should check out the $1,049 Asus ROG Zephyrus G GA502. But if you’re looking to game on a budget without sacrificing too much performance, the Lenovo Legion Y545 is a great choice.