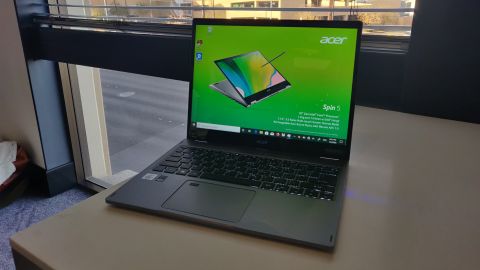 Acer's Spin 5 seems like a marked improvement over its predecessor thanks to its 2K display, slim design and 10th Gen CPUs

LAS VEGAS -- Acer's Spin series laptops are getting a serious facelift. Announced at CES 2020, the Spin 3 and Spin 5 laptops were redesigned from the ground up with a slimmer, more compact chassis. The 2-in-1 laptops also pack the latest Intel 10th Gen processors and can be configured with a 2K resolution display.

These are specs we don't expect from the Spin 3 and Spin 5, so we're excited to receive a review unit. At CES 2020, I got to see in person how Acer has transformed its popular 2-in-1 notebooks and walked away impressed.

Serious changes were made to the design of the Spin 5. Gone is the bland slab of chunky metal and in its place is a slim magnesium-aluminum machine that looks more premium than its sub-$1,000 price suggests.

The Spin 5 has a flexible chassis that can transform into a tablet by pushing the lid back 360 degrees. The lid feels rigid without being difficult to move.

There is still not a lot to say about the Spin 5's grey design. It's simple, perhaps to the point of still being boring. One element that adds a bit of flair is the lift-up hinge that elevates the keyboard for a more comfortable typing experience. There's also a fingerprint sensor so you can quickly and securely login via Windows Hello.

If only every laptop offered the same ports as the Spin 5. The 2-in-1 laptop has two Thunderbolt 3 inputs, two USB 3.1 Type-A ports, an HDMI 2.0 pot, a microSD card reader and a 3.5mm headphone and mic jack.

We don't know exactly how bright the panel is supposed to get but Acer promises viewing angles of 170 degrees. I was impressed by the panel's vivid colors and sharp details in the brief time I had with the device.

Surrounding that display are thin bezels that give the laptop an 80% screen-to-body ratio. That doesn't come close to other premium laptops we've tested, but at least the nasty thick frames of old have been whittled down.

The Spin 5's backlit keyboard is decent but didn't stand out in any way when I typed on it at CES. The keys were a bit shallow but clicky enough.

I really appreciate that Acer is throwing in a stylus with the Spin 5. The Active Stylus uses Wacom AES (active electrostatic) technology to replicate the feel of using ink and paper. It has 4,096 pressure levels, so expect a precise drawing. The Spin 5 supports an optional stylus with Wacom AES 2.0, which Acer claims is even more accurate.

The stylus is about the size of a pen (4.93 inches) and has a textured exterior. When you're done writing or drawing, you can place the stylus in a storage dock that protects and charges it.

The Acer Spin 5 will be powered by the latest Intel 10th Gen processors. Specifically, you can choose between the Core i7-1065G7 or the Core i5-1035G4.

Those are Ice Lake processors, which means you also get beefed up Iris Plus graphics. While nowhere near as capable as a decent discrete GPU, Iris Plus has proven to be a significant step up for integrated graphics. With those 10th Gen chips you also get a goodie bag of features that includes Wi-Fi 6.

Like most thin laptops, the Spin 5 tops out at 16GB of RAM and can be configured with up to a 1TB SSD.

The 54Wh 4-cell battery inside the Spin 5 promises up to 15 hours of battery life. That's one hopeful statistic. In fact, we'd be happy with two-thirds of that runtime when we test the device's real-world endurance.

Acer is also releasing the lower-end Spin 3 alongside the Spin 5. The two devices are similar in many ways but the Spin 3 has a lower-res 1080p display with a standard 16:9 aspect ratio and only goes up to a Core i5 CPU. The Spin 3 is also a bit heavier than the Spin 5, at 3.3 pounds, and battery life is rated at 12 hours.

Acer seems to have taken the lukewarm reception of its Spin laptops to heart; The Spin 5 appears to be an improvement over its predecessor in every way. We're excited to see its 13.5-inch, 2K display and to test the included Wacom-powered stylus. From what we know so far, the Spin 5 could be the surprise laptop of 2020.