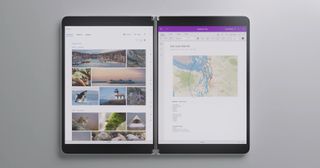 Microsoft appears to be running on schedule for the launch of the Xbox Series X and Surface Duo, but not everything will arrive on time this year. The dual-screen Surface Neo and Windows 10X won't be released in 2020, according to a ZDNet report citing unnamed sources.

The Surface Neo and Windows 10X were originally scheduled for Holiday 2020, when the Xbox Series X and Surface Duo are slated to arrive. But ZDNet's contacts said chief product officer Panos Panay informed his team that the dual-screen laptop and its accompanying OS won't make it this year.

This also means it won't be possible for third-party vendors, like Dell, Lenovo and Asus, to ship products running on Windows 10X until next year at the earliest. Windows 10X is designed for dual-screen and foldable devices, a new era of products already in development by various manufacturers.

Lenovo was the first to unveil a dual-screen device in the ThinkPad X1 Fold. The company says it will release a version for business users running Windows 10 Pro before selling a Windows 10X edition for consumers. Dell gave us a look at its plans for the future, which consist of Concept Ori and Concept Duet -- a duo comprised of a foldable laptop and a dual-screen device. It's not clear if delays to Windows 10X will cause these third-party vendors to push back their plans.

There are also rumors that Windows 10X will arrive on all laptops, not just those with new form factors. If true, regular clamshell laptops and 2-in-1 hybrids will adopt the operating system. It'll be interesting to see what types of devices get Windows 10X versus Windows 10 Home.

COVID-19 could be at fault

ZDNet believes delays to the Surface Neo and Windows 10X are caused by the coronavirus outbreak. Microsoft even warned that Surface products would take a sales hit due to supply chain slowdowns. The supply chain is supposedly getting back online but not in time to save the Surface Neo.

It's not all bad news. ZDNet reports that certain Windows 10X features could arrive in Windows 10 this year. Specifically, Microsoft might fast-track a feature that lets you make Windows apps available virtually using containers.

Microsoft has major launches in the Xbox Series X, Surface Neo and possible Surface Book 3 and Surface Go 2, slated for later this year. So as much as we're anticipating the new version of Windows, there's still a lot to look forward to. More importantly, delaying Windows 10X should give Microsoft the extra time it needs to iron out notorious Windows 10 update bugs.