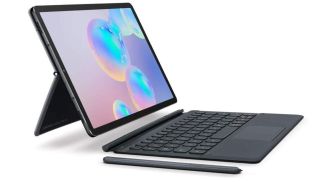 Samsung is the last major player in the high-end Android tablet space and rumor has it the company is ready to go even bigger with its forthcoming entries in the Galaxy Tab S line.

While we already reported there would be two variants of the next Galaxy Tab S, the latest news from SamMobile indicates that the differentiator will be the size of the tablets: 11 inches and 12.4 inches.

Bigger screen and a bigger number

Both options (identified only by their model numbers, SM-T97x and SMT87x) will be a step up from the 10.5-inch screen in the previous Samsung Galaxy Tab S6, and bring it more in line with the iPad Pro in terms of screen real estate.

The actual retail name for the tablets remains in question as sequentially it should be the Galaxy Tab S7, but previous rumors have suggested that Samsung may take this opportunity to unify its top-end Android smartphone and tablet numbering and call it the Galaxy Tab S20.

Can it compete with the iPad Pro?

Regardless of the final name or screen size, the hardware has never really been the issue for Samsung tablets in the competition against the iPad or iPad Pro. There's no question Apple has an edge where sheer performance is concerned, but the Galaxy Tab S line has offered plenty of speed for the majority of tasks.

The Qualcomm Snapdragon 865 we expect to see in the next iteration of the Galaxy Tab S will continue that tradition and give the next Galaxy Tab S an advantage over the iPad Pro in the form of 5G support. Although rumors suggest yet another new iPad Pro will add 5G before year's end.

Apps are the biggest problem for Samsung to overcome. The motivation for developers to make robust apps for a fading platform just isn't there. Now Android support in Chromebooks offers some hope that more will take an interest, but again, there are few high-end Chromebooks with Samsung and Google being the main torchbearers.

With larger screen sizes we may be seeing Samsung repositioning the Tab S as a productivity tool. Samsung's own DeX software tries to make the Tab S a real laptop alternative and Microsoft has thrown a lot of effort into its Office apps on Android. The combination may be enough to win over buyers who see these compelling and more affordable options from Samsung.