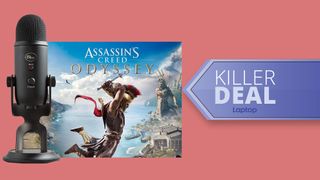 Cyber Monday deals are picking up steam, and right now you can pick up a bundle for the Blue Yeti USB microphone with Assassin's Creed Odyssey for only $89, which is one of the best USB microphones paired with a great game at $50 off.

The Blue Yeti is typically on sale for around $120 on its own, so getting it down to $89 with a game is a steal. The microphone features recording modes such as cardioid, bidirectional, omnidirectional and stereo. It has on-the-spot gain control and a 3.5mm audio jack for headphones.

The Blue Yeti also has plug-and-play setup that functions with Windows 10 and macOS. And with Assassin's Creed Odyssey, you're set to play a superfun game and stream with a supercrisp microphone.