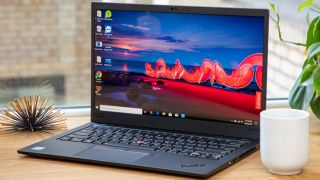 Looking for the best Lenovo Cyber Monday deals? Well, you're in the right place.

Lenovo is dealing out some serious discounts on its best laptops, so now is the best time to snag one of the company's Cyber Monday deals. Lenovo Cyber Monday deals include heavily discounted ThinkPads, Yogas and Ideapads.

Almost every laptop in Lenovo's catalog is on sale for Cyber Monday. Even our favorite ThinkPad X1 Yoga is 50% off right now.

While Cyber Monday technically lands on Dec. 2 this year, sales are happening right now, and we imagine even more will happen on the actual day.

Here are the best Cyber Monday Lenovo deals you can find right now. For additional up-to-date deals on more laptops, tablets and accessories, make sure to visit our Cyber Monday deals hub.

Lenovo 100e Chromebook: was $349 now $209
It won't break any speed records, but at $209 (with code "THINKSGIVING", the 100e Chromebook is one of the cheapest laptops of Cyber Monday. This laptop is especially great for kids because of its ruggedized chassis. View Deal

Lenovo 500e Chromebook: was $369 now $249
This low-cost Chromebook has a flexible chassis that lets it transform from a laptop into a tablet. It also comes with a stylus and sports an 11.6-inch display.View Deal

Lenovo 14w Laptop: was $299 now $129
Do you need the cheapest Windows 10 laptop that currently exists. Well, let me introduce you to the Lenovo 14w Laptop. This cheap as hell machine comes with AMD A6-9220C CPU, 4GB of RAM and 64GB eMMC of storage.View Deal