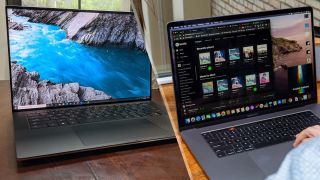 It’s one of my favorite face-offs of the year: the Dell XPS 15 versus the MacBook Pro. Both laptops have earned 4.5 stars and Editor’s Choice awards. They also have spots on our Best Laptops 2020 page. Targeting power users like creative professionals, both laptops are absolutely stacked.

In one corner you have the XPS 15. The newly updated laptop is smaller, but still manages to house larger keys and a massive keyboard. Dell also found a way to dramatically shrink the bezels even further, including the thick bottom border. Plus, this is the first XPS featuring Intel’s new 10th Gen Comet Lake H-series processor, which is great for multitasking. The notebook also has an Nvidia GeForce GTX 1650 Ti Max-Q GPU so you can edit photos and videos or play a game or two.

In the other corner, there’s the 16-inch MacBook Pro. The evolution of the 15-inch MacBook Pro, the new laptop is bigger and better, flaunting a 16-inch Retina display. The laptop also has the Magic keyboard, which is music to the ears of typists everywhere. Oh, and theMacBook also boasts some of the best speakers you’ll find on a premium laptop. Take a look under the hood and you’ve got a 9th Gen Intel Core i9 processor ready to tear through all your productivity tasks and an AMD GPU primed to handle any data crunching or content creation you have in mind.

But which premium powerhouse reigns supreme? Read on to find out.

Our test configuration costs a steep $3,899 and includes the same processor but doubles the SSD, RAM and VRAM.

We’re intimately familiar with the designs of both the MacBook and the XPS 15. But both laptops have undergone some notable aesthetic changes this time around. We’ll start with the XPS 15. It never ceases to amaze me how Dell finds ways to shave millimeters off nearly every iteration. This time around, the XPS 15 is 5.5% smaller than the previous model.

Despite the slight shrinkage, the XPS 15’s exterior is still made from platinum silver CNC aluminum. The Dell insignia is etched into the lid with its glossy finish catching every bit of light. For more subtle bling, the laptop’s sides are chamfered. The notebook’s interior consists of black carbon fiber on the palm rest with a full-sized keyboard and a power button that doubles as a fingerprint reader. Looking at the display, you see barely any bezels (more on that later).

All aluminum, all the time. The MacBook Pro’s chassis is made entirely from aluminum. Our review unit came in Space Gray, but the notebook is also available in Silver. Like every MacBook you’ve seen for the past five years, the 16-inch MacBook Pro has gentle rounded corners, a smooth, sleek finish and the trademark half-eaten logo on the lid. Inside the laptop, you get more aluminum goodness with an absurdly large touchpad taking up a fair amount of the palm rest directly below the keyboard. The Touch Bar sits above the keyboard with the power/Touch ID button residing in the top right.

This is a battle between the old and the new. The XPS 15 gives you a USB Type-C port, two Thunderbolt 3 ports, a headphone jack, a wedge lock slot and a full SD slot. The latter is  a legacy slot which should make a lot of photographers and videographers happy.

The MacBook Pro gives you a headset jack and four Thunderbolt 3 ports, which means you’re going to need a dongle or two if you want to use a mouse or external hard drive. And while Dell ships a USB Type-C-to-Type A adapter with the XPS 15, you’ll have to shell out between $19 and $69 if you want to purchase one from Apple.

What bezels? Dell is inching ever closer to ditching bezels for good. But for now, they’ve taken the next step of getting rid of that chunky bottom border, making a four-sided InfinityEdge. That’s how you get a 15.6-inch display with a 3840 x 2400 resolution and a 16:10 aspect ratio. The touchscreen is also made of Corning Gorilla Glass 6, which means it’s pretty durable.

But two can play that game. Apple has also started shrinking the bezels. The borders are nowhere near as slim as the XPS 15’s bezels, but they’re definitely much slimmer than past MacBooks. But while it would have been nice to get a 4K panel, Apple stuck with its 2560 x 1440 Retina display, just in a 16-inch size.

Watching The High Note trailer side-by-side, the XPS 15 definitely was the more vivid of the two notebooks. Not that actress Tracee Ellis Ross didn’t look resplendent in her sunflower yellow dress on both displays -- she did. But the hue was more inviting on the XPS 15. And with its higher resolution, finer details like the actress’ flyaway hairs and the gleam of the golden awards in the background were cleaner on the XPS 15.

It’s magic! Magic keyboard that is. Apple has put the typists of the world out of our collective misery by putting the unreliable and uncomfortable Butterfly keyboard to rest in favor of the Magic keyboard. The keys are clicky and have more feedback than the Butterfly keys. I didn’t have to worry about my fingers bottoming out, which is always a good thing.

Similar to the XPS 13, the 15 now has larger keys, but without sacrificing good spacing. And while the keyboard is definitely comfortable, compared to the Magic keyboard, the XPS 15’s keys were a little mushy.

When I took the 10fastfingers typing test, I achieved 75 words per minute on the MacBook compared with 71 wpm on the XPS 15. Both scores are above my usual 70-wpm average.

On the Black Magic Disc test, the MacBook Pro’s 1TB SSD reached a write speed of 2,224 MBps and a read speed of 2,116. Running the file transfer test, the XPS 15’s 512GB PCIe SSD duplicated 4.97GB of multimedia files in 8 seconds for a transfer rate of 726 megabytes per second.

Despite all that power, the MacBook has surprising endurance. The system lasted 10 hours and 55 minutes on the Laptop Mag Battery Test, which consists of continuous web surfing over Wi-Fi at 150 nits of brightness. The XPS 15 also was a shocker. Despite its 4K panel, the laptop managed to last 8:01.

Dell continues to prove that it’s one of the top premium Windows 10 laptops on the market. The company made a bunch of small refinements that make what was already an excellent notebook that much better. You get a high-performance system that’s smaller, with tiny bezels, a beautiful 4K display, and a larger keyboard and touchpad. Additionally, the XPS is pretty powerful, delivers great audio and has a reasonable starting price.

But if you think this means the MacBook Pro should be written off, you’d be wrong. With its Core i9 processor, this notebook is made for data crunching and media creation. The laptop’s larger frame means a bigger Retina display, which is absolutely lovely. And the Magic keyboard is a joy to type on. However, that price will be a sticking point for the more budget-conscious consumers.

MacBook or XPS, no matter which laptop you choose, you’re getting a premium system with high-powered performance, a beautiful display and great audio.