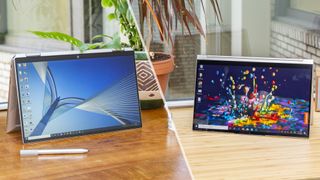 Lenovo is finding its way back up the best 2-in-1 laptops rankings after last year's Yoga C930 was topped by the HP Spectre x360 13 and the Dell XPS 13 2-in-1. The new Yoga C940 already took down Dell's capable contestant in a nail-biter showdown, but what about the excellent Spectre x360 13?

A few design tweaks and faster 10th Gen Intel processors are nice additions to the Yoga C940, but it faces renewed competition; HP's Spectre x360 13 was our favorite 2-in-1 laptop in 2019 because of its gorgeous design and epic battery life. Can the Yoga C940 compete against the Spectre? Read on to find out.

Lenovo likes to take risks with its Yoga line, but the C940 is very similar to its predecessor. For the second year in a row, the Yoga C940's standout design feature is the soundbar hinge, which pumps out unobstructed sound when the laptop is in clamshell, tent or tablet modes.

The laptop, available in Mica and Iron Gray, trades aesthetics for practicality. However, that's not to say the Yoga C940 isn't a great-looking device. Its sleek, minimalist design blends into any environment; it would fit in equally well in a classroom and a business meeting. But what impresses me most is how functional the design is.

I already touched on the soundbar speaker, but that's just one of several useful features Lenovo added to the Yoga C940's design. On top of the laptop's lid is a reverse notch that adds enough space for a webcam, an IR camera and sensors. Plus, the small lip makes it easier to open the laptop. Finally, the Yoga C940 has a stylus slot, or "garage," which houses the included pen when you're finished writing or drawing.

The Spectre x360 doesn't have all those extra features, but in my opinion, it's the best-looking laptop on the market. With its gem-cut edges and sharply angled corners, the Spectre x360 looks like a piece of fine jewelry. From the stylish chrome HP logo to the triangular-patterned speaker grilles, the attention to detail HP put into the Spectre x360 13 really paid off.

While both laptops have thin bezels, the razor-thin edges around the Spectre x360 13's display make this one of the most compact laptops around. Instead of adding a notch, HP somehow fit a custom-built  miniature webcam onto the Spectre's top bezel.

Only a card reader separates these two laptops when it comes to ports.

The Spectre x360 13 wins this round because it also has a microSD card slot so photographers can upload photos and videos.

I preferred the Yoga C940's display in a side-by-side comparison of the two laptops' 1080p panels. The Yoga's screen exhibited a much cleaner white balance when I visited some of my favorite websites. In comparison, the Spectre x360 13's screen had an unpleasant yellow tint. That off-white tone was less noticeable when I watched a Birds of Prey trailer, but some things still skewed a bit yellow, including Harley Quinn's pale face. I didn't notice much difference in sharpness between the two 1080p displays, and they looked equally bright. Colors were also punchy on both panels, but the Yoga C940 had better contrasts.

Our display benchmark results tell a slightly different story. Yes, both panels are similar, but the Spectre x360 has the edge on paper. According to our colorimeter, the Spectre x360 13's 1080p display covers 109% of the sRGB color gamut, making it a tad more colorful than the Yoga C940's display (104%).

The Spectre x360 might have the edge based on our measurements, but the Yoga C940 wins the eye test, so it gets this round.

The Yoga C940's and Spectre x360 13's keyboards are much more comfortable than those on most ultraportable laptops.

I found the typing experiences to be quite similar. The backlit, Chiclet-style keys on both laptops are well spaced and big enough for large hands. That said, the Spectre x360's keys offered a bit more key travel and felt bouncier than the Yoga C940's. Because of this, I'll give the nod to the HP laptop.

As much as I like the keyboards on these laptops, I wish the actuation force, or the pressure required to register a keystroke, weren't so high.

HP upgraded the Spectre x360's 4.3 x 2.2-inch touchpad with Precision drivers. While it's more responsive than before, I prefer the Yoga C940's wider, 4.1 x 2.8-inch touchpad because it gave my fingers more vertical space to work with. I had no problems executing Windows 10 gestures (pinch to zoom, three-finger swipe to switch windows) on either surface, but my fingers kept clipping the top edge of the Spectre x360's narrow touchpad.

Each laptop comes with a stylus. HP's pen is more comfortable, but the Yoga C940's stylus holder is superconvenient.

Equipped with the same Intel Core i7-1065G7 processor and 16GB of RAM, our Spectre x360 and Yoga C940 review units performed similarly on our benchmark tests.

The gap widened on the video transfer test, when the Yoga 940 converted a 4K video to 1080p resolution in just 19 minutes and 32 seconds. It took the Spectre x360 21 minutes and 13 seconds to finish the same task.

The Yoga C940 kept up the pressure on our file transfer test, duplicating 4.97GB of multimedia files in just 5 seconds, for a blistering rate of 1,017.9 megabytes per second. The Spectre x360 came nowhere near that mark, with a time of 16 seconds and a rate of 318.1 MBps.

Our graphics test was a nail-biter, but the Yoga C940 came out on top again. With a 3DMark Ice Storm Unlimited score of 110,376, Lenovo's machine slightly surpassed the Spectre's score of 107,453.

If laptops were Olympic runners, the Spectre x360 13 would take the gold, and the Yoga C940 would settle with silver.

These two marathoners offer class-leading battery life, particularly the Spectre x360 13, which lasted 13 hours and 20 minutes on our in-house test (continuous web surfing over Wi-Fi at 150 nits). The Yoga C940's 11:46 runtime wasn't too shabby, either, and crushed the premium-laptop average of 8:42.

On the flip side, Lenovo has some excellent deals on storage upgrades. For example, you can go from a 256GB SSD to a 512GB SSD for just $25 more. HP charges $90 for that upgrade. Lenovo and HP both charge $200 to upgrade from 1080p to 4K, but the Spectre's 4K display is AMOLED. We haven't tested that panel but OLED screens typically offer more saturated colors and deeper black levels than standard LCD panels.

These two excellent 2-in-1 laptops are so evenly matched that we couldn't declare a winner.

When choosing between the two, our best advice is to really think about what you need in a laptop. If portability and battery life matter most to you, then get the Spectre x360 13. With 13+ hours of battery life, the Spectre outlasts every other laptop in its class.

If a 13-inch display is too small for you, then go with the 14-inch Yoga C940. It outperformed the Spectre x360 in our benchmark tests and still offers very long battery life in a sleek chassis.

If you're still not sure which to choose, then start looking for the best deals, because you can't go wrong with either laptop.