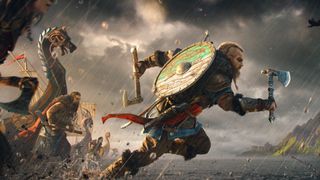 The fact that the Xbox Series X is the most powerful next-gen console seems settled at this point, but the hardware is only part of the story for a console.

When Microsoft revealed the Xbox Series X specs, it gave the performance targets as 4K at 60 fps as the minimum with the ability to top out around 120 fps. But according to a recent statement from Ubisoft to IGN, the upcoming Assassin's Creed Valhalla will "run at a minimum of 30 FPS."

The company went on to say that, "On Assassin’s Creed Valhalla, we are committed to offer the best experience to our players by immersing them in the most beautiful worlds and environments we could create, and leveraging not only the graphics enhancements offered by the next generation of consoles, but also faster loading times and the new architectures."

While we didn't exactly get much gameplay in the trailers that were released last week as part of the first Xbox 20/20 event, many of the games did look beautiful. But given the expectations that are being set by both the hardware and recent reveals, like the Unreal Engine 5 tech demo on a PS5, there is definitely a reason for concern that early titles on next-gen consoles are going to fall short of what many are imagining.

This is only one publisher, so there's a chance others are hitting that 60 fps minimum target. Still, I'd hesitate to make that assumption. We'll certainly be watching Xbox Series X and PS5 performance claims closely from developers going forward and Ubisoft has its own digital showcase event in July to provide everyone a closer look at its upcoming games.